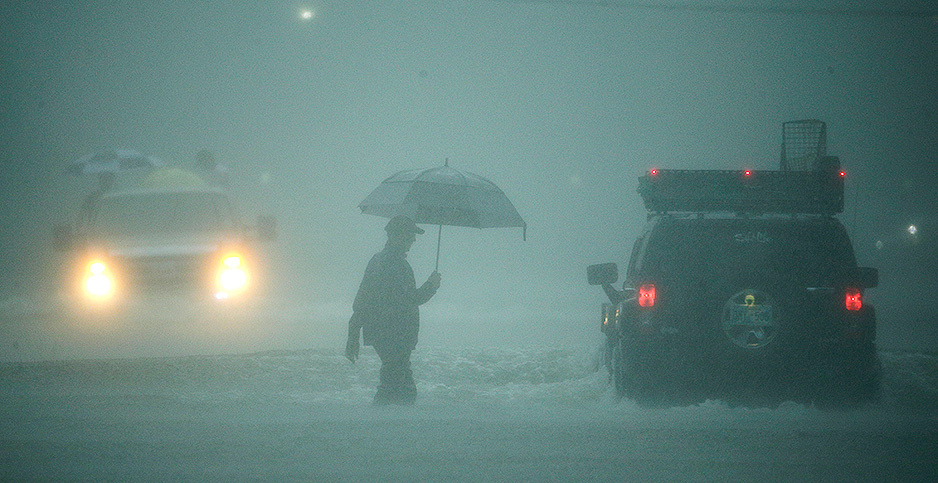 A man walks through floodwaters yesterday from Tropical Storm Harvey as he evacuates his home in Houston. Charlie Riedel/Associated Press

HOUSTON — The most powerful hurricane to hit Texas since the 1960s left devastation in its wake, and the disaster is still unfolding as now-Tropical Storm Harvey continues to pour rain and misery here.

The storm made landfall late Friday night as a Category 4 hurricane. The National Hurricane Center said the storm made landfall near the seaside resort town of Rockport near Corpus Christi, famous for chartered fishing expeditions and a nearby wildlife refuge that offers winter habitat for endangered whooping cranes. The town took heavy damage, with at least one fatality.

Harvey then slowly tracked over Victoria, about two hours southwest of Houston and known for its classical music festival. More widespread property damage has been reported there, and many of the city’s utilities were knocked out and remain out of commission.

Then for most of Saturday night, Harvey focused its rage on Houston, the self-styled energy capital of the world. At least five deaths have been reported.

Howling winds and torrential rainfall kept residents here awake for most of that night. The rains resulted in catastrophic flooding and mass rescue efforts that continue. During a press briefing, Texas Gov. Greg Abbott (R) said support was "pouring in from other states" as the Coast Guard, National Guard and state public safety officers work overtime to free thousands from flooded homes.

The flooding is in every part of the city. Coast Guard helicopters were hovering low over the far northwest corner of Houston late this morning, looking for people in distress after floodwaters filled neighborhood streets overnight.

"This is the strongest storm Texas has had since 1961, and when you consider the larger population now than what we had back then, obviously this is a very large disaster," Abbott said. "And then you consider the size of it, ranging all the way from Corpus Christi to Houston and parts north of Houston. You have not only the wind component but also the rain component and flooding."

He tried to reassure weary Texans that the state was already in talks with the federal government on a rebuilding plan.

Harvey grew rapidly from a lazily organized tropical depression into a Category 4 hurricane as it moved over the Gulf of Mexico, feeding on the warm waters there. Shortly after it hit Texas, the storm stalled instead of moving inland and dissipating as is usually seen with hurricanes. Although Harvey has weakened to a tropical storm, residents in Houston wouldn’t describe what occurred next as weak.

Harvey pulled large bands of tropical moisture from the Gulf and dumped it on Houston and its suburbs. Local weather reports indicated that at least 20 inches of rain fell in much of the city in about 24 hours. Some parts of the city may record 30 inches of rain or more by the time it stops falling. Houston is flood-prone with few defenses even against a sustained downpour, and Harvey took full advantage of this vulnerability, turning freeways into rivers and inundating any neighborhoods within a few miles of a waterway.

Despite the large number of residents trapped by rising water, Houston Mayor Sylvester Turner defended the decision to not order a mandatory evacuation in an interview with the local Fox TV news affiliate. The mayor said evacuation was made impossible by the fact that no one knew precisely where Harvey would go.

"You cannot evacuate 6.5 million people when you don’t know where the danger is that you’re evacuating from," Turner said. "When you do an evacuation of a city the size of the city of Houston and Harris County, it has to be very well thought out, very organized. You have to make preparations early; otherwise, you would be putting more people in danger."

Though the devastation in Houston is immense and widespread, Abbott said the response is focused on helping all areas hit by the storm.

"It’s important not to forget the challenges that people in the counties outside and around Houston are suffering because of the immense rainfall," he noted, "in particular Liberty County and Brazoria County."

The nation will very soon notice Harvey’s impact at the gasoline pump.

Exxon Mobil Corp.’s Baytown refinery was shut down because of flooding reported at the site. That puts about 560,000 barrels a day of refining capacity offline.

Royal Dutch Shell PLC has shuttered its Deer Park refinery, as well. Citgo Petroleum Corp., Petróleo Brasileiro SA and more have reported closed refineries, with about 2,400 refining units shut off in the Petroleum Administration for Defense District 3 region. All told, about 1.4 million barrels a day of refining capacity is believed to be offline.

An official at Valero Energy Corp. said its refining operation in the Houston Ship Channel was running, but Houston’s port remains closed, as does the Port of Corpus Christi. Valero is still struggling to bring its Corpus Christi refining infrastructure, which was shut down in advance of Harvey’s landfall, back online.

"We are working closely with local, state and federal agencies as well as our business partners to evaluate infrastructure needed to resume refinery operations, in particular port operations," Valero spokeswoman Lillian Riojas said.

Shuttered refineries in the Houston and Corpus Christi areas are expected to remain inoperative for at least a week.

Meanwhile, the Bureau of Safety and Environmental Enforcement, which manages offshore energy safety, reported that about 20 percent of the Gulf of Mexico’s crude oil production was shut in by the storm. Given that the coastal staging areas for these offshore oil and gas operations are experiencing tropical storm conditions, it can be expected that much of that offshore capacity won’t re-enter service until after Harvey leaves coastal Texas. A little under 400,000 barrels per day of crude oil production from the Gulf is temporarily shut in.

Joe Brusuelas, chief economist at the consulting firm RSM, said the impact from lost refining capacity will be substantial. He estimated that at least 13 percent of the nation’s refining output has been shut down so far and predicted regional fuel price spikes of around 30 percent.

"Beyond the shutdown of refining capacity and loss of oil production, the rest of economic losses from the storm will likely total more than $24 billion," Brusuelas said. "We think that once we have a chance to look at the loss of structures and property, we’ll have total losses of greater than $45 billion."

The nation’s gross domestic product will be hurt this quarter, RSM predicted. Recovery efforts later in the year will likely add to economic growth.

Brusuelas added that the National Flood Insurance Program is woefully underfunded and set to expire Sept. 30.

"There are going to have to be special supplemental [appropriations] to deal directly with the crisis, and probably we’re going to have to have a significant amount of cash put forward to keep the National Flood Insurance Program solvent."

In other words, recovery from Harvey will require an act of Congress (see related story).