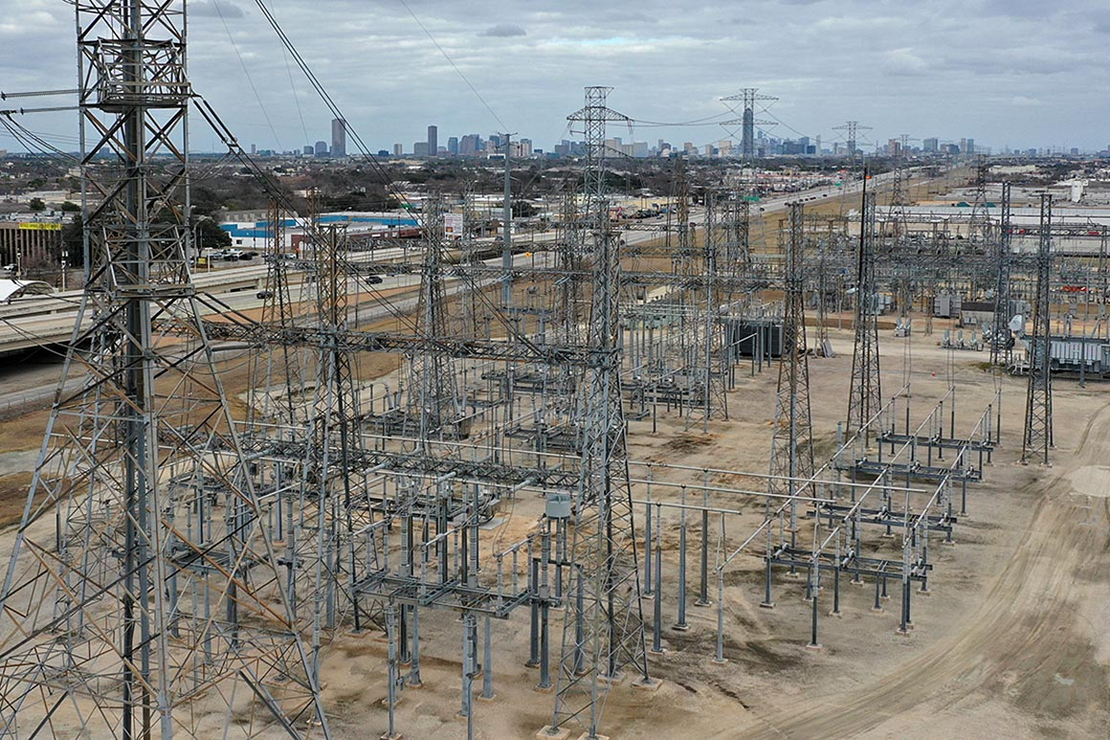 An aerial view of an electrical substation is pictured in Houston in this photo taken Feb. 21, 2021. Justin Sullivan/Getty Images

Peter Lake, chairman of the Public Utility Commission of Texas, and two fellow regulators signaled to state lawmakers that change is coming in the wake of this year’s grid scares and deadly blackouts. Some potential adjustments could make renewable projects less desirable in the state and aid power plants that use fossil fuels and nuclear energy.

The PUC is virtually certain to act even if details must still be hammered out because the grid remains a concern among Texans and there’s pressure to avoid another crisis as Gov. Greg Abbott (R) seeks reelection in 2022.

“We are not tweaking on the edges or making marginal changes,” Lake said during a public hearing. “We are taking a blank-slate approach for a full overhaul and redesign of this market to drive reliability.”

Lake said the PUC should have a clear view of what the market redesign would look like by the end of 2021, although specifics could be implemented over time. Affordability of a plan also was a core component mentioned by Lake.

For now, the region managed by the Electric Reliability Council of Texas relies largely on the potential for spiking power costs to drive investment in generation. The system has been in place for about two decades. It was designed by the Texas Legislature and overseen and tweaked by the PUC over the years as ERCOT handled day-to-day operations.

But widespread dissatisfaction has been apparent this year after a winter storm in February caused massive blackouts when power plants failed. The storm and associated electricity outages led to more than 200 deaths in Texas, according to a state tally. Tight grid conditions also occurred in April and June, though major power outages were avoided.

A presentation from ERCOT in February showed that natural gas accounted for more capacity offline among generators in ERCOT’s region during the winter storm than any other single resource, though facilities tied to wind, coal, nuclear and solar saw outages or output reductions. But renewables have continued to receive criticism, including as wind provided little output at key times in June as conventional generators dealt with numerous outages.

State lawmakers passed electricity legislation earlier this year that sets the stage for some reform, and Abbott recently directed the PUC to make changes. That included a call to allocate reliability costs to generation resources that cannot guarantee their own availability, such as wind and solar. The governor also requested incentives in the ERCOT market to foster development and maintenance of “adequate and reliable sources of power” such as gas, coal and nuclear.

The ongoing discussion has renewable advocates concerned about the industry’s outlook in Texas (Energywire, July 7). Other market concerns, such as whether there may be manipulation among generators or how batteries may evolve, come up in the Texas debate but aren’t headlining it. Critics have suggested Texas leaders haven’t focused enough on making necessary improvements to prevent another grid disaster (Energywire, June 2).

Grid changes aren’t on the current special session agenda set out by Abbott, who focused on a number of conservative priorities in an initial list of items. A group of Texas Democratic lawmakers traveled to Washington this week to deny the Texas House a quorum to move forward on new voting restrictions.

Members of the PUC indicated yesterday during a legislative hearing that they believe they have the legal and statutory authority to make changes to the power market. The three commissioners as well as Brad Jones, ERCOT’s interim president and CEO, took questions from lawmakers who have been trying to explain grid problems to constituents.

Along with more reliable generation, Lake said, there need to be economic incentives for companies to invest in existing and new generation in Texas. This summer, ERCOT at times has been telling certain generators they must operate.

ERCOT has recorded about $1.6 million in make-whole payments this year for reliability unit commitments through July 8 — more than three times what occurred in all of 2020. Market participants cover such costs.

Lake described that as a stopgap approach while changes are put in place. He said generators don’t like being forced to run when it’s not economic.

“Implementing market redesign is a monumental task,” Lake said, arguing that renewables present a challenge because they are intermittent.

But Michael Jewell, a clean energy lobbyist and member of the advisory board of Conservative Texans for Energy Innovation, said he’s concerned that Abbott’s recent directions could lead to a reduced ability to take advantage of low-cost renewables and leave Texas consumers to face higher power prices. He called for Texas to look to fix its natural gas supply system.

State Sen. Charles Schwertner (R), who chairs the Senate Committee on Business & Commerce, which met yesterday, highlighted the governor’s call to incentivize generation that could be dispatched to help with reliability and address issues with resource variability. Dispatchable power often refers to plants that run on fossil fuels.

“If not, we need to do something different regarding some sort of regulated system that assures that the lights stay on,” he said.

Lake responded that he believes the PUC has tools and authority and levers to pull. Some of the options, he said, may include a financial incentive for generation that has certified backup fuel during the winter. There also could be adjustments to an existing incentive mechanism that is layered on top of the market price at certain times.

Lake stressed that the market needs to move away from a crisis-based business model in which there’s only a financial reward the closer the system gets to a crisis. He said the PUC is seeking input from the public to help decide potential design elements.

“We need to have a market designed so that if you provide reliability, that’s where the financial incentive is presented,” he said.

Questions remain about how potential changes could be implemented, such as to help fossil fuel plants while costs could be added to renewable projects.

But Lake said there needs to be accountability, as well.

“We can’t just throw money at existing assets,” he said.

Cyrus Reed, interim director of the Lone Star Chapter of the Sierra Club, said legislators understand the urgency of the grid’s problems but aren’t necessarily thinking about innovative ways to solve the problem.

“At some point, you’ve got to realize you’re in an energy transition,” Reed said. “Relying on extra payments to old gas plants — it could be helpful in the short term just to avoid any problems, but it’s really not the long-term solution.”

He said lawmakers and regulators need to look at other solutions, including energy efficiency, battery storage and demand response — which involves paying customers to cut their electric use during peak periods.

They also need to understand that climate change is going to continue to challenge the electric grid, according to Reed.

“If our summers are getting longer and hotter, and therefore we rely more on traditional generation, that means there’s just less time to maintain these units,” he said.

Lake told lawmakers that much of the private investment community is waiting to see what a new framework will look like, and he suggested a need for incentives to maintain existing generation and attract new investment.

As leaders debate next steps, a new report this week from the University of Texas, Austin, suggests the state has a lot to consider from the February crisis.

The report, completed with PUC funding, says all types of generation failed and that demand forecasts for severe winter storm were too low when looking ahead at potential extremes. It says some electricity generators weren’t weatherized adequately.

Gas system problems started before electricity outages, the report notes, and some critical gas infrastructure was enrolled in an emergency response program that’s designed to cut power when called upon. The amount of gas in storage also was limited, according to the document.

Companies that operate in the Texas market are still coping with financial implications of the February freeze and high power and natural gas prices. Bloomberg recently reported, for example, that gas sellers potentially saw a $11 billion windfall related to the Texas winter storm.

Joshua Rhodes, a research associate with the Webber Energy Group at the University of Texas, Austin, who worked on the new UT report, said there should be a mandated ability for power plants to operate at certain minimum temperatures.

Rhodes also said natural gas infrastructure also needs more attention, and he stressed a need for improved models for future events. He called for figuring out “what type of storm, what type of weather event do we want to plan for” in order to make reasonable recommendations.

Also this week, ERCOT released a road map of how to make the grid more reliable. It lists 60 tasks — with 20 completed and 40 on track, at least based on the parameters ERCOT used.

Finished items include proposing a new market rule for generators to provide operational updates more frequently and adopting a more aggressive approach to operating the grid. ERCOT says the aggressiveness will affect “outage approval, commitment of resources, conservation alerts and the communication of system risks as well as wholesale prices.”

The on-track items include requiring market participants that own or operate generation or transmission and distribution lines to submit a letter signed by their CEOs twice a year attesting to weatherization preparations.

There’s also a discussion by ERCOT of moving to eliminate barriers to distributed generation, energy storage and demand response. And there’s a point about evaluating market incentives to improve fuel security, while another is on evaluating requiring wind and solar generators to provide additional reliability attributes.

Jay Zarnikau, a research fellow with the Department of Economics at the University of Texas, Austin, said during a virtual press conference yesterday that the road map is a good document — even if it won’t necessarily address all of the failures pointed out in the new report on February’s blackouts. Zarnikau was among those worked on the new UT report.

Lake, who was appointed to the PUC in April by the governor, continues to telegraph that change is ahead.

“Texans deserve a more reliable grid, and we’re aggressively moving to make that a reality,” he said in a statement yesterday.