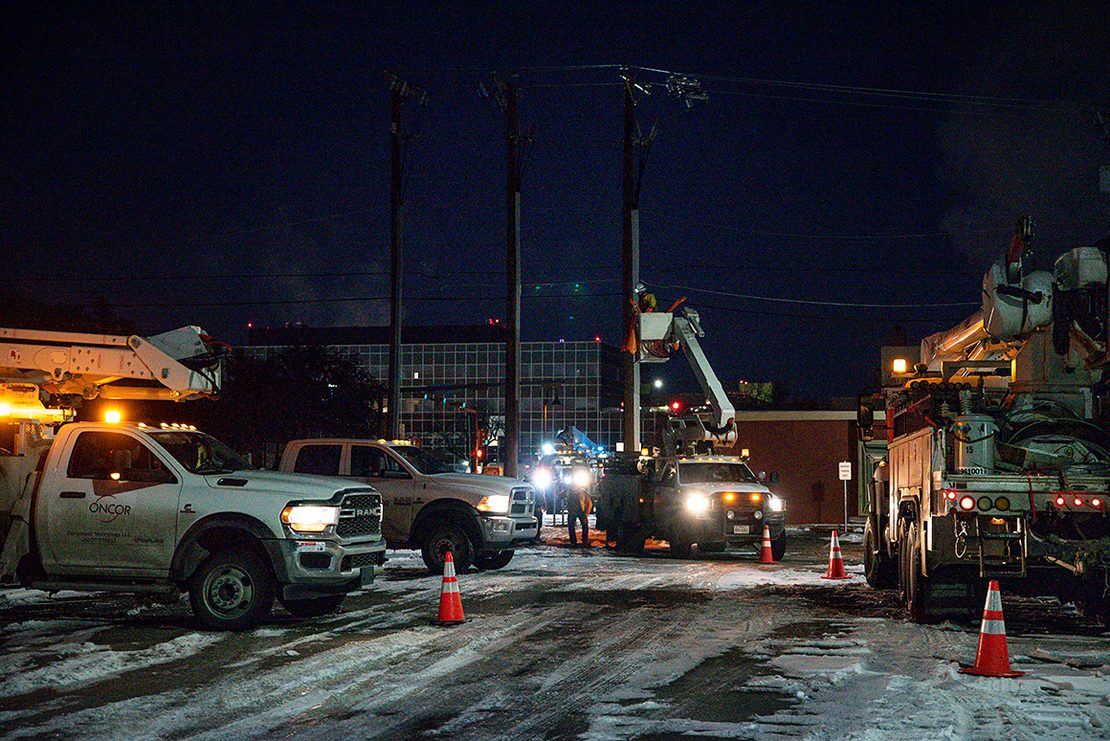 An Oncor Electric Delivery lineman crew is pictured working on repairing a utility pole that was damaged by the winter storm that passed through Texas last February. The blackouts and power crunch led to a spike in electricity prices. Eli Hartman/Odessa American via AP, File

The new “high system-wide offer cap” will be $5,000 per megawatt-hour, according to a proposal backed by the state Public Utility Commission. It will apply to the region managed by the Electric Reliability Council of Texas (ERCOT), the state’s main grid operator.

The $9,000-per-MWh figure proved “to be a liability on market participants and customers of ERCOT” after extreme weather in February, according to the PUC filing. The $5,000 number is slated to be in place for the start of 2022. A lower cap of $2,000 has been used much of this year after the February crisis, but the $9,000 ceiling was set to return in January if no action was taken.

“This was a very, very quick turnaround in order to make sure that it could be implemented by Jan. 1,” PUC Chair Peter Lake said yesterday.

Power prices often hover in the tens of dollars per MWh in ERCOT’s region. But the system designed by Texas policymakers has framed high prices in tight conditions as a way to drive investment in generation. The ERCOT region saw extended periods with $9,000-per-MWh wholesale prices in February, and some ancillary services prices went even higher. The result was billions of dollars of costs for energy companies and others.

The spike walloped some residential consumers with plans tied specifically to wholesale prices, including people who used Griddy Energy and in some cases saw bills in the thousands of dollars (Energywire, Aug. 31). Many Texans who live in areas with a competitive retail market are on fixed-rate plans, meaning they likely didn’t see higher rates right away but are subject to increases in the future.

In the filing endorsed by PUC members, the commission said the change “would help ensure prices remain affordable during the upcoming winter season and lessen the financial risk to customers during scarcity events.” ERCOT has indicated it should have enough generating capacity with a typical winter on the grid, though extreme conditions could still lead to blackouts (Energywire, Nov. 22).

The PUC said lowering the high offer cap to $5,000 “strikes the best balance” of various factors at play.

In a statement yesterday, ERCOT said it’s pleased that the PUC “continues to focus on market and reliability improvements that will benefit Texans.” The grid operator noted the Jan. 1 effective date for the price cap change and said it has “already started work to make the needed changes.”

Joshua Rhodes, a research associate with the Webber Energy Group at the University of Texas, Austin, said the shift away from $9,000 per MWh is something that probably “had to happen” politically. Prices at that level may seem like price gouging to a casual observer, he said, compared with a normal price of in the range of $30 per MWh.

Rhodes said the high cap change may be combined with other shifts, such as having the cap hit earlier as tight conditions approach. It seems as though Texas regulators are seeking to adjust the ERCOT market from within, not embarking on “a massive sea change,” Rhodes said.

But he said the electric system still depends heavily on the natural gas system. That’s why Rhodes said oversight from the Railroad Commission of Texas (RRC) will be important in terms of natural gas preparations. The RRC has taken some steps, but a number of details remain to be determined (Energywire, Dec. 1). Both the PUC and RRC will look further at weatherization efforts.

“If we fix all the power plants but don’t fix the gas system, we can still be in a situation where we’re short on power [and] prices are really high for a long time,” Rhodes said.

A number of Texas leaders wanted the PUC to revise billions of dollars of power prices after a market monitor found excessive charges, but that effort fell short (E&E News PM, March 5). Billions of dollars of extra costs related to natural gas and electricity are expected to be spread among Texas consumers over many years.

Still, Texas has looked at a number of changes, including taking steps to prevent certain higher-risk electricity plans from being available to residential customers. And the PUC is looking at a range of potential customer protections.

Texas regulators also continue to discuss proposed market design changes for the ERCOT region. More is expected to be known about the PUC’s preferred direction before the end of 2021. Renewable energy advocates have voiced concerns about potential effects on wind and solar projects (Energywire, Nov. 30).

Ed Hirs, an energy fellow at the University of Houston, said it’s a “complete fiction” that putting a price cap at $5,000 or $9,000 encourages companies to invest in new generation in the ERCOT power market. Some generators may not want to add to the fleet under that system, he said, because that could make it less likely that prices will rise to the cap. Hirs has long worried about potential market manipulation in the region.

Instead, Hirs said there needs to be price regulation on the bottom end to set a floor, given that many generators may not make enough to reinvest under normal prices. While some experts have questioned proposals to create a new system that could pay power plants to be available in case they’re needed by ERCOT, Hirs said something like that should be considered.

"We absolutely have to pay for reliability," he said.