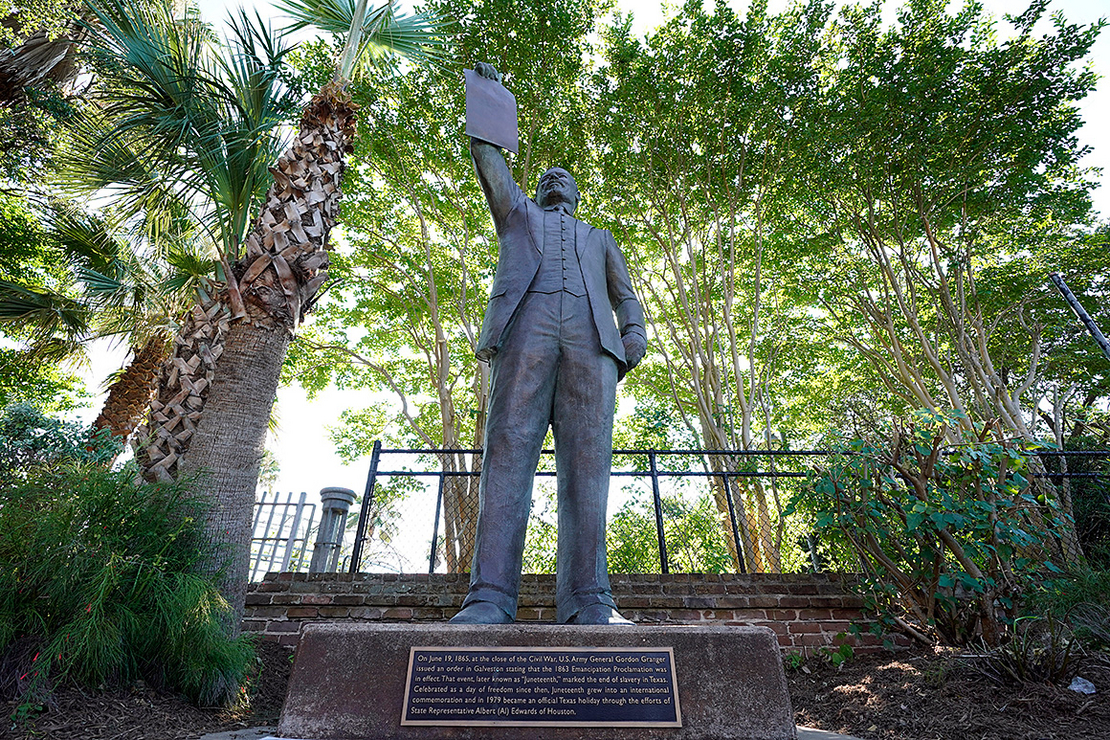 A statue in Galveston, Texas, depicts a man holding the Texas law that in 1979 made Juneteenth a state holiday honoring the emancipation of enslaved people. The National Park Service is now examining creating an Emancipation National Historic Trail, which would extend from Galveston to Houston. David J. Phillip/AP Photo

A 51-mile route in Texas walked by some of the last slaves to win their freedom in the United States in 1865 could become the newest addition to the National Park Service.

NPS said it has launched a study to determine whether the path now linked to the Juneteenth federal holiday should be designated as a national historic trail.

If the park service gives the green light to the project, Congress will still get the final say.

The only other national historic trail focused on the struggles of Black Americans is in Alabama, a 54-mile stretch from Selma to Montgomery. Created by Congress in 1996, that trail recognizes the civil rights marches led by the Rev. Martin Luther King Jr. in 1965.

The park service said it will accept public comments on the Texas proposal until March 31.

The Emancipation National Historic Trail, which would extend from Galveston to Houston, would honor the events of June 19, 1865, when U.S. Maj. Gen. Gordon Granger issued General Order No. 3, informing Texans that all enslaved people had been freed with the ending of the Civil War.

“The people of Texas are informed that, in accordance with a proclamation from the Executive of the United States, all slaves are free,” Granger wrote. “This involves an absolute equality of personal rights and rights of property between former masters and slaves, and the connection heretofore existing between them becomes that between employer and hired labor.“

A year after Granger’s order, Black Americans celebrated the first Juneteenth to mark the one-year anniversary of the 250,000 enslaved people in Texas learning they were free. President Biden last year signed a bill that made Juneteenth a federal holiday, calling June 19 “a day of profound weight” for all Americans.

After President Trump signed the bill into law in January 2020, Cornyn said the new law “honors those Texas families who traveled from Galveston to Houston to share the monumental news that all slaves had been freed.”

Jackson Lee said passage of the bill marked “a historic moment for the state of Texas and for the nation.”

“It will provide enhanced knowledge about the historic announcement by Captain Granger that the slaves were free,” she said.

The park service’s national historic trails system now includes 19 routes that span 31,000 miles across 41 states, according to the NPS website.

The trails recognize “routes of exploration, trade, displacement, conflict, military action and migration” and are designated by Congress for the public’s enjoyment and to “showcase the diversity of American heritage,” NPS said.

They include the Oregon National Historical Trail, which designated more than 2,000 miles in six states to honor the path taken by early American settlers. Another one, the Lewis and Clark National Historic Trail, spans 4,900 miles in 16 states from Pennsylvania to Oregon and recognizes the 1804 journey of frontiersmen Meriwether Lewis and William Clark to explore U.S. land obtained in the Louisiana Purchase and the Pacific Northwest.

NPS said that it usually has a series of public meetings as part of its studies for new sites but that it’s developing plans for virtual public meetings instead to gather testimony for the proposed Texas site.

“Due to the COVID-19 outbreak, the study team has concluded that it is not feasible or safe to schedule in-person public meetings at this time,” NPS said.