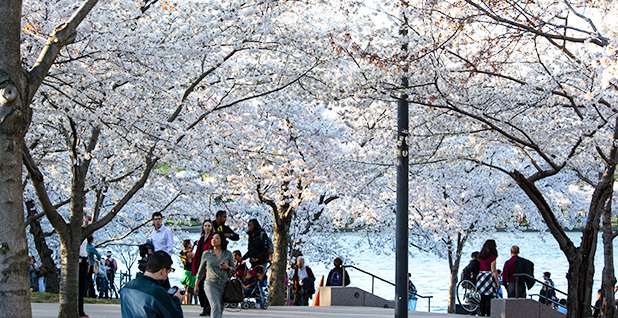 Americans are pretty pleased by the warming weather brought about by climate change, a new study finds -- though most say they are aware that the pleasant days aren't going to last. Photo by Tim Evanson, courtesy of Flickr.

From Nashville to Houston, America’s weather is more pleasant now compared to 40 years ago, which researchers worry could limit concern about global warming.

The findings, published in Nature yesterday, address one of the emerging theories about climate communication: that people would care more about curbing carbon emissions if only they could experience climate change in their everyday lives.

One of the clearest present-day manifestations of climate change is temperature. As carbon dioxide has built up in the atmosphere, it has raised global temperatures by 1 degree Celsius since preindustrial times. But the warming has not been uniform everywhere and in all seasons.

In the United States, winters have gotten warmer at a faster rate than the summers have since the 1970s, said Patrick Egan, a professor of politics at New York University and lead author of the study. Weather in places like Dallas and Atlanta, and indeed much of America, has improved. The handful of less pleasant places include Providence, R.I.; Boston; San Diego; and Phoenix.

A large body of economics research suggests Americans prefer warmer winters and temperate summers. This means 80 percent of Americans are experiencing climate change in a positive, rather than a negative, way, Egan said.

"Our sense is when you tell the public that temperatures are rising, which tends to be a big component of communication strategies these days about climate change, the public may be interpreting that in lots of different ways, particularly if you’re telling them about rising winter temperatures, which, as we know, many Americans find to be an improvement," Egan said.

The finding is not particularly surprising, said Alexa Spence, a professor of psychology at the University of Nottingham who was not affiliated with the study. Gradual warming over many decades will go unnoticed by most people. Even if it is noted, people may not link it to climate change, she said. Most people exhibit so-called motivated reasoning, where they acknowledge evidence that confirms their pre-existing beliefs and political opinions and ignore evidence that does not.

Egan’s study shows that by 2100, 88 percent of Americans will be living in regions where the summer is scorching while the winter remains cold.

"The take-home message for me is that weather changes in the future in the U.S. may become significantly more uncomfortable, which could impact perceptions of climate change and the need for action," said Spence. "But I’m not sure we want to hang about and wait for that to happen."

Egan stressed that his study does not address Americans’ perception of extreme weather events.

Communicators are fascinated by climate extremes, such as Superstorm Sandy, which lashed New York and New Jersey in 2012. Everyone from President Obama to Bill Nye the Science Guy has tied extreme weather events to climate change.

The goal of these communicators is to help people connect the dots, said Anthony Leiserowitz, a social scientist at Yale University’s program on climate change communication.

"Even now, many people will experience a flood or heat wave and they don’t automatically connect that to climate change, even when it is scientifically appropriate to connect it to climate change," he said. "People are just starting to see broader patterns here."

Social science research on climate extremes is sparse but suggests that living though a flood or a storm prompts some people take note of climate change, particularly if their political leaning allows it. Whether that leads to a desire for climate action in the long term has not been studied, Leiserowitz said.

Just because extreme weather is not a significant influence now does not mean it will not become powerful in the future, Leiserowitz said.

Egan is doubtful about extreme weather as a communication tool. The amount of public concern about climate change has remained flat despite Hurricane Katrina and Superstorm Sandy, he said.

"The real challenge is that, on a national level, Americans do not prioritize this problem to the extent that they should," he said. "None of these things, whether it is extreme weather or temperature, are moving opinion in a sustained fashion on a national level."