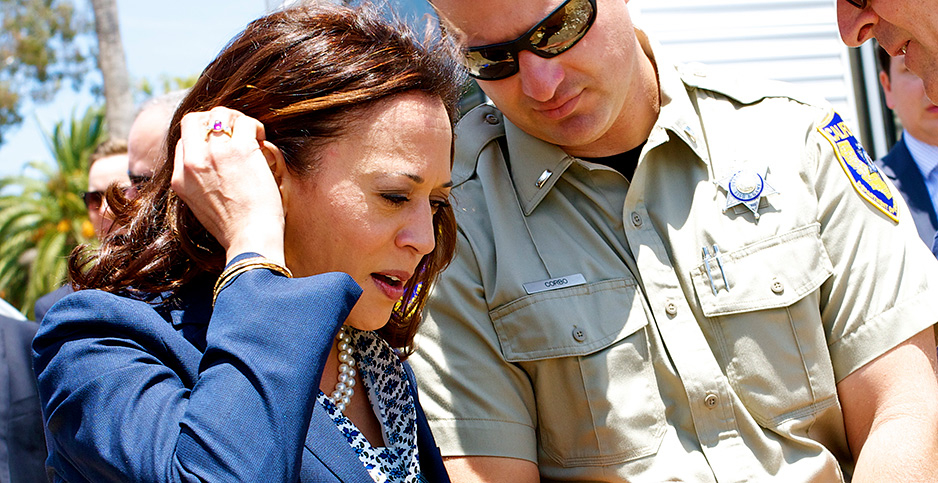 Kamala Harris is seen touring the site of an oil spill in California as attorney general in 2015. Office of Attorney General Kamala Harris/Wikimedia Commons

Joe Biden’s support for fracking and Kamala Harris’ opposition to it represent one of the deepest fault lines within the Democratic presidential ticket.

The gap used to be wider.

In her final days as California attorney general, Harris sued the Obama administration over the Interior Department’s permitting regime for hydraulic fracturing off the Pacific coast. Environmental groups had already spent years battling offshore fracking in court, and they welcomed the state’s involvement as a boost.

"We must take every possible step to protect our precious coastline and ocean," Harris said when she announced the lawsuit.

"The U.S. Department of Interior’s inadequate environmental assessment would open the door to practices like fracking that may pose a threat to the health and well-being of California communities," she added. "We must balance our energy needs with our longstanding commitment to protecting our natural resources and public health."

Harris filed the lawsuit on Dec. 19, 2016, two weeks before she would be sworn in as California’s junior senator.

The timing meant that it would be the Trump administration defending offshore fracking in court, even though it was the Obama administration that had approved the permits and produced an environmental review that claimed no significant impact from fracking.

Some activists wished Harris had involved the state sooner, but they nevertheless praised her for bringing California’s resources — and political heft — to bear on the case.

"She could’ve taken a pass, and she didn’t," said Brett Hartl of the Center for Biological Diversity Action Fund. The center is one of the groups that had been litigating California’s offshore fracking for years.

Maggie Hall, a senior attorney at the Environmental Defense Center, another group involved in the legal fight, said that Harris’ entrance into the suit was helpful for arguing that the federal government had violated the Coastal Zone Management Act, which grants the state input on coastal management.

Biden does not appear to have been directly involved in California’s offshore fracking. The lawsuit instead named agency officials responsible for offshore drilling. As a longtime senator from Delaware, Biden has also voiced skepticism of offshore drilling and warned of its potential impact on tourism.

But as Obama’s vice president for eight years, Biden’s environmental record is deeply entwined with the administration’s actions — including its efforts to boost U.S. oil and gas production.

The administration supported fracking as a way to displace coal emissions and curb the geopolitical influence of oil-producing nations. In Ukraine, Biden brought a "technical team" to help the country develop its shale gas reserves, according to a 2014 White House fact sheet.

"On the merits, the Obama administration was not always great on fossil fuels. There was a lot of ambivalence," Hartl said, adding that Harris took a strong stance against fracking during her presidential campaign.

Biden now says he would ban all new fossil fuel production on federal lands and waters — bringing him in alignment with Harris’ 2016 lawsuit. He still supports fracking on private land.

Because of the lawsuit, a federal district court ordered an injunction on new Pacific offshore fracking until the government resolved endangered species consultations and coastal management obligations.

The court upheld the environmental review findings, which environmentalists are appealing. A separate appeal by oil industry interests fighting the injunction is still pending (Energywire, June 19, 2019).