The 2022 EVs that matter most for climate 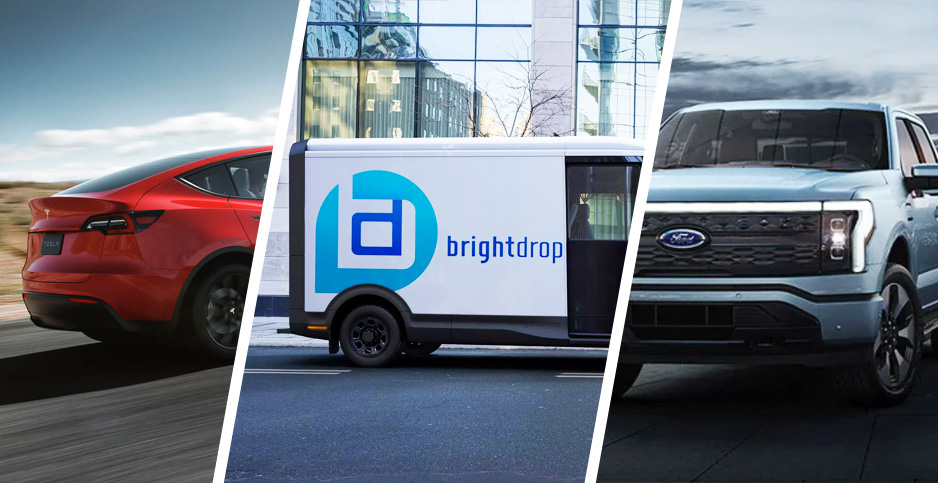 Teslas, delivery trucks and pickups are among the 2022 EVs that will have the most emissions impact. Tesla; BrightDrop; Ford

Showrooms this year will have more new electric vehicle models on sale — at least 20 — than any year in history. Automakers and their dealers will say each one is a world changer.

But not all EVs are equal when it comes to their impact on the climate.

That factor is stubbornly important: Transportation is 31 percent of the country’s carbon emissions, a number that has barely budged despite the 2.2 million EVs now on the road. E&E News surveyed a number of experts on which 2022 EV models will move the needle on emissions.

Observers said the ones to watch won’t necessarily be the ones paraded through Super Bowl ads or get plaudits from the automotive press. Many aren’t flashy or are beyond the reach of the regular buyer.

New luxury rides from Mercedes or Cadillac are too expensive to sell in large numbers. Muscular mud-mashers like the GMC Hummer or the Rivian R1T will likely just dribble out of factories this year.

What matters for the climate is that gasoline or diesel isn’t burnt in the first place. That metric is sometimes called avoided emissions. The EVs that avoid the most emissions are those sold in greatest numbers, are the heaviest or that log the most miles. Generating electricity to charge an EV has its own emissions, but it’s a separate metric.

Here are the low-emissions EVs that the experts have their eyes on:

While automakers talk about the EVs they hope to sell in high volumes someday, there’s only one company that will likely perform that feat in 2022.

And not just a little, but a lot: In 2021, Tesla says it delivered 936,000 EVs, with the overwhelming majority being the more affordable Model 3 sedans and Model Y SUVs.

By comparison, the second-biggest U.S. seller of electric vehicles, Ford Motor Co. might sell 127,500 EVs this year, according to estimates by Alan Baum, an independent auto analyst in Detroit. That includes 95,000 of the Mustang Mach-E and 32,500 of the Lightning F-150 pickup truck.

In 2022, Tesla’s numbers are poised for a rapid climb.

The automaker’s plants in Austin, Texas, and Berlin are due to come online soon. The more optimistic analysts guess that more than 2 million Teslas could arrive worldwide.

Some of those Teslas will be on shared platforms that guarantee a lot of road miles. Revel, a startup taxi service in New York City, is packing luggage into Model Ys, while Hertz Corp., one of the country’s largest auto-rental networks, is offering spins in the Model 3.

Toyota RAV4 and the plug-in hybrids

They don’t make headlines, but one of the most important classes of low-emission vehicles is a growing quiver of plug-in hybrids.

These PHEVs outdo the Toyota Prius, the green vehicle of yore, by shifting vehicle’s gas-electric mix more in favor of electric. In doing so, they make possible a zero-emissions commute.

The traditional hybrid is one that recharges its battery, a relatively small one, from the gas engine or from the act of braking or decelerating. Plug-in hybrids have a larger battery and rely on it for a number of pure-electric miles before the gas engine kicks in. That larger battery requires external recharging via the electric grid — thus the name “plug-in.”

The bestselling PHEV in 2021 was the Toyota RAV4 Prime, which debuted in 2019. Right behind it is the Prius Prime, the plug-in version of Toyota’s bestselling Prius. “Toyota can’t make enough of the RAV4 hybrid,” said Krebs.

These models lead a small crowd of PHEVs now on sale at dealerships. None sell in huge numbers, but well enough: The RAV4 hybrid outsold the all-electric Chevy Bolt, Volkswagen ID.4 and Nissan Leaf last year, according to figures from iSeeCars.com.

The value proposition for drivers is clear. They provide a number of zero-emission miles — usually between 20 and 30, with the RAV4 highest at 42 miles — before drawing from the gas tank. This saves money while avoiding the range anxiety that comes with a pure battery-electric car.

New models are proliferating. Last year, Ford introduced a plug-in Escape SUV. South Korean automakers Hyundai and Kia offer a plug-in version of nearly every model in their lineups, the latest being SUVs like the Hyundai Santa Fe and the Kia Sorento.

In 2022, the roll call will grow with off-road offerings from Jeep, including plug-in Wranglers, Grand Cherokees and Gladiators.

Delivery vehicles matter to emissions because they are not only heavy — they also cover lots of miles, every workday. More of these vehicles will go electric this year than any in history.

How many is hard to say, because truck-makers guard their sales numbers and aren’t themselves sure how rapidly production can ramp up. But it will be “a drop in the bucket,” said Ben Sharpe, a heavy-duty vehicle analyst at the International Council on Clean Transportation who estimates that less than 500 units hit the road last year.

“We’re talking about sales between one and a dozen,” Sharpe said. “We aren’t seeing big numbers of these trucks rolling out yet.”

On the curbside this year, one may occasionally see the electric Ford Transit or General Motors’ BrightDrop van. Other packages will be squired by Arrival, a British startup with small factories in North and South Carolina, and Rivian Automotive Inc., which is making trucks for Amazon.com Inc.

There’s a reason these are among the first big vehicles to go electric, said Jason Mathers, the director of vehicles and fleet strategy at the Environmental Defense Fund. Their typical use case — navigating a predictable daily route and returning to base overnight — pairs well with the limited range of the battery and the need to spend hours recharging.

Other heavy vehicles are ramping up as well. School and transit buses have the most momentum, followed by trash haulers and utility cherry-pickers, as well as a few big regional-haul trucks like the Volvo VNR or the Daimler eCascadia.

“This market has really accelerated over the last couple of years,” Mathers said, to the point that “we really can’t keep up with it.”

“The vehicles themselves work really well,” Mathers said. “We need a lot more work to develop the charging infrastructure and the charging interface that companies need to use these vehicles at scale.”

This electric version of America’s bestselling truck is being watched closely by climate hawks this year, even though its immediate consequences will be slight.

The reason? “I think the pickup-truck segment is most important for climate impact,” Krebs said.

It isn’t just that trucks are crazy popular or that they are big vehicles that guzzle more fuel. They straddle two key markets: regular truck drivers, many of whom will get their first exposure to EVs through the F-150, and fleet buyers, who could eventually buy electric versions in massive numbers.

“You’re not selling one to one. You’re selling a whole bunch to one buyer,” Krebs said of the fleet as a customer.

Ford plans to start production of the new F-150 in the spring, and it is not alone or first. Rivian beat Ford by producing just over 1,000 R1T trucks in 2021. Behind Ford is Tesla, which may not debut its Cybertruck until 2023. Each has a long list of paid reservations.

But customer interest in electric trucks won’t by itself cool the planet. First the vehicles themselves have to be made en masse. Ford, Rivian and Tesla are just starting up their assembly lines, and it is highly unlikely that they will satisfy customer demand in 2022.

Baum, the Michigan analyst, estimates that the F-150 Lightning will sell 32,000 units this year. Rivian — between its pickup, its SUV and the delivery truck it is making for Amazon — could produce 30,000 units.

That’s significant but is a handful of gravel compared to the 726,000 traditional F-150s that Americans bought last year.

Volkswagen ID.4 and the crossovers

Volkswagen, the first traditional global automaker to stake its future on electrics, may start to see that effort start to bear fruit in the U.S. this year with the ID.4.

It is a crossover, which means a small SUV that is based on a car platform rather than a truck’s.

American drivers love crossovers, and two models by traditional automakers — the ID.4 and Ford’s Mustang Mach-E — are likely to sell well and start to alter the emissions profile of America’s passenger cars.

While other automakers offer electric crossovers, they are made on other continents and shipped here. High demand in Europe and Asia means relatively few reach American dealerships.

By contrast, Ford and VW will make theirs in North America. The Mach-E is made at Ford’s Cautitlán plant outside Mexico City. This year, Volkswagen is expected to take the wraps off a new $800 million all-electric assembly plant at its factory in Chattanooga, Tenn. Its first product will be the ID.4.

VW sold only 15,000 of the vehicle last year, but those were imports. With the new Tennessee plant, the German automaker should start to be able to make a lot of electric crossovers and price them competitively, Baum said.

Baum estimates that ID.4 sales this year might rise to 24,000. Add in the perhaps 95,000 Ford Mustang Mach-Es, and the two traditional carmakers may begin to nip at Tesla’s heels.