The agency has a deputy. Is he the administrator-in-waiting? 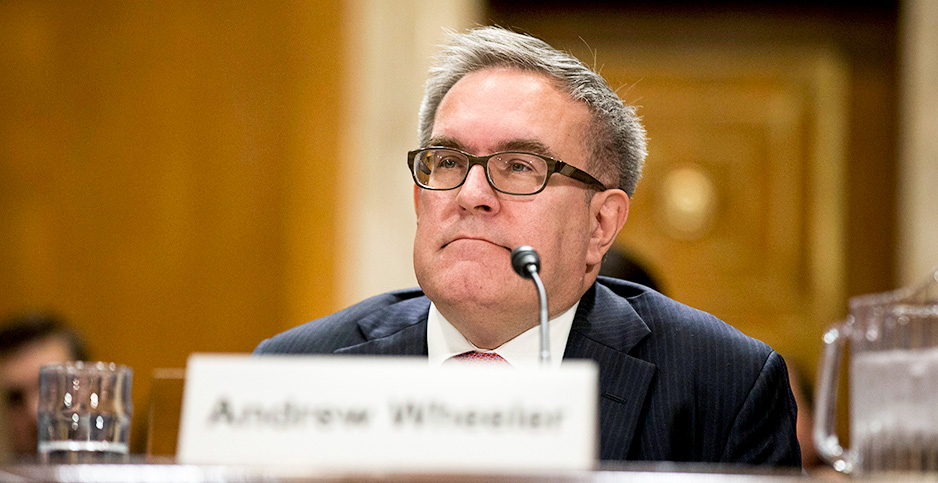 Administration officials, EPA career staff and industry executives are envisioning a future with Andrew Wheeler at the helm of EPA.

Wheeler was confirmed by the Senate yesterday to be deputy administrator of the agency, even as Scott Pruitt, EPA’s chief, continues to come under fire for allegations of ethical lapses. Pruitt’s job security was in question in recent weeks as revelations about excess spending and ties to lobbyists piled up, but he seems to have shored up President Trump’s support, at least for now.

"Trump at this point appears to be OK with Pruitt, but you never actually know what’s in his head on this," said an administration official. "White House staffers are joking that Wheeler’s going to be the administrator."

Even before the ethical flare-ups, Pruitt was widely expected to leave EPA — perhaps to seek elected office — before Trump’s term ends. If the president decides to fire Pruitt, or if the EPA chief steps down, Wheeler is expected to fill in. He could be there for a while, depending on whether Senate Democrats can fend off the confirmation of another Trump nominee to lead the agency.

Wheeler, a former coal lobbyist and staffer to Sen. Jim Inhofe (R-Okla.), was nominated last October for the deputy job at EPA. His confirmation months later came as allegations of Pruitt’s unethical behavior have sparked investigations within the White House and at EPA.

Now, agency staffers think he might be their next boss.

"People are certainly wondering who would take over, and now that we apparently have a [deputy administrator], he’d be the first in line," said an EPA career employee. "Nobody here really knows him that much, so nobody knows what to think."

A source in the White House acknowledged that many of the mishaps surrounding Pruitt threatened to waylay Wheeler’s nomination. That would have been a blow to an agency already under fire for its chief’s actions.

"There has been some concern that these stories would harm [Wheeler’s] ability of getting in," the White House official said. "What people want to make sure is that EPA continues to be effective as it can be moving forward, to help us get past this."

Meanwhile, some industry representatives would prefer to have Wheeler at the helm.

"Folks are thinking in some cases it might be a step up because [Wheeler] has more institutional know-how of the process, how to move things along," said a refining industry executive. Wheeler and EPA air chief administrator Bill Wehrum would be "a really good one-two punch" on Clean Air Act issues.

"Everyone in our industry loves Scott Pruitt," the executive added, but "everyone is shaking their heads at the questionable situation he’s putting himself in. … He’s bringing unnecessary heat on all the other stuff he’s done."

As far as the bad press affecting Pruitt’s agenda, that person said that "it slows it down a little bit in terms of the staff being able to focus for more than two minutes. … Everyone’s pretty distracted right now."

Myron Ebell of the Competitive Enterprise Institute, the former head of Trump’s EPA transition team, said it’s "no surprise that Pruitt doesn’t have unanimous support in the White House." And he said it’s clear that the White House is watching for further bad news about the EPA chief.

"And obviously if there is, the people who don’t support him in the White House are going to say, ‘Hey, look, now we’ve got Andrew Wheeler confirmed, and use him at least as the acting administrator.’ I can see that this is at least a plausible alternative, but I’m still focused on supporting Pruitt and focused on getting Andrew confirmed as deputy."

Pruitt and Wheeler are coming from "different standpoints" but are "focused on making fundamental reforms at the EPA," Ebell said. "They’re absolutely agreed with the president that the Obama climate agenda has to be rooted out completely. So I think they’ll work well together. They have complementary experience and talent. … It’s too bad they haven’t been together since September."

And while Pruitt appears to have Trump’s support for now, continued reports about his exorbitant spending likely aren’t helping. Yesterday, Democratic lawmakers sent Trump a long list of complaints about Pruitt, including allegations that he exceeded the legal amount allowed to decorate his office and sought a contract to rent a private jet that would have cost about $450,000.

"Trump certainly gets ticked off when he hears about his Cabinet officials being loose and irresponsible on travel," said the administration official.