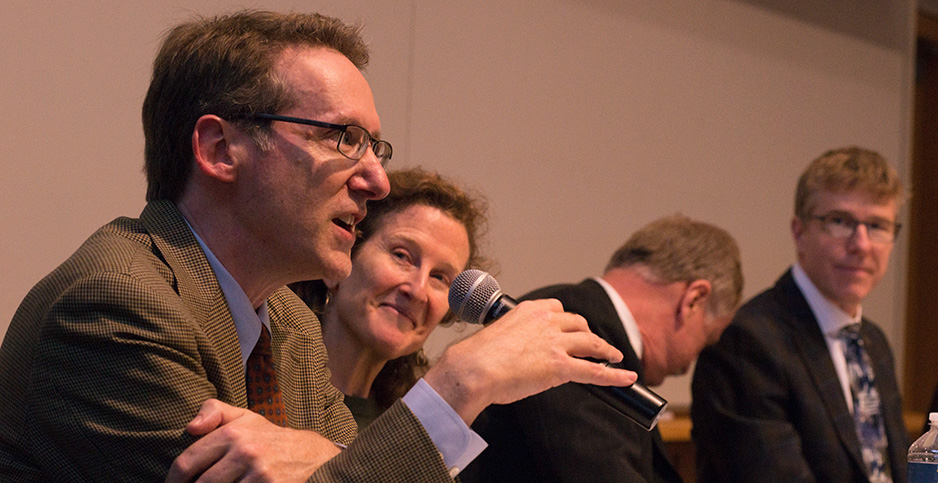 President Biden’s pick to be EPA’s top cop was once described as “an idealistic federal prosecutor who lived to nail bad guys.”

The accolade, made by a Washington Post writer, came after David Uhlmann helped prosecute a man who forced a 20-year-old employee to mop up cyanide sludge, nearly killing him and leaving him with permanent brain damage.

Uhlmann was hailed a hero. A book was written. Congressional hearings were held on hazardous workplaces.

Now the 58-year-old Uhlmann, who has been director of the University of Michigan’s environmental law program since 2007 after 17 years at the Justice Department, is bracing to return to the federal government.

Should his nomination be approved by the Senate, his new role will force him to abandon his hard-nose cop proclivities to focus more on civil settlements. Civil cases don’t require proof of criminal intent, just that a law was broken.

The appointment comes at a particularly difficult time for the EPA office. Enforcement figures have dropped considerably, notably during the Trump administration, but before that too. Career EPA scientists and experts, meanwhile, have left the agency in droves. Many more are nearing retirement in the coming years. And funding for EPA programs has always been a concern. But observers have high hopes for Uhlmann.

“From EPA’s standpoint, he’s a good get,” noted Howard Lerner, who lectures at the University of Michigan.

About a dozen of his former colleagues and other observers agreed. They lauded his tenacity and intellect, brushing off questions about any abrasive tendencies, instead describing him as “a pleasure to work with,” “principled” and “not a reactive guy.”

“One thing I did admire about David is he got his own hands dirty,” said Tom Sansonetti, who served as assistant attorney general for the Environment and Natural Resources Division at the DOJ. “It’s easy to delegate everything.”

As his colleague Andy Buchsbaum, a University of Michigan lecturer, put it: “He put people in jail for breaking the law. I’d say he’s a nice a guy, but he’s not afraid of conflict.”

‘The need to have environmental enforcement’

Uhlmann was born in Flint, Mich., and grew up in Washington, to a dad who was a psychologist and a mom who was an early childhood educator.

After high school, he set off for Swarthmore College in Pennsylvania, where he studied history and political science and worked at the student paper, The Phoenix. The college archives show he wrote lots of stories about university affairs and on occasion he appeared in them. He was elected to the College Judiciary Committee, one story shows. He graduated in 1984 — the same year as Kevin Hassett, who later become a Trump White House economic adviser. Uhlmann said he knew who he was “but that’s about it.”

Uhlmann went on to obtain a law degree from Yale and in 1990 got a job at the Justice Department, where he spent 17 years as a federal prosecutor. In 2000 he was promoted to lead the Environmental Crimes Section. There, he made a point to stick up for environmental enforcement, even after 9/11, when resources were strapped and officials like Larry Thompson, the former deputy attorney general, were forced to devote more efforts to counterterrorism.

Upon hearing this, Uhlmann immediately asked to meet with him, Thompson recalled in an interview with E&E News. “He was not being selfish, but he educated me about the need to have environmental enforcement, especially criminal enforcement,” Thompson said by phone. Uhlmann explained environmental terrorism to him, and he recalculated his decision. “He was very smart and very reasonable. He made a tremendous impression on me.”

Later, Thompson worked closely with him on the infamous Volkswagen emissions cheating scandal. Thompson served as the independent compliance monitor, and Uhlmann was his counselor. At the time, Thompson recalled, Uhlmann “played a key role in our work in educating Volkswagen in criminal aspects of environmental law.”

“I know people at Volkswagen really responded in a positive way,” he said. “The executives felt they were prepared and understood the difference between civil and criminal cases.” Asked if he thought Uhlmann would be able to easily take off his criminal defense hat and put on his civil one for the EPA role, Thompson did not hesitate. “I think he’s well aware of those distinctions,” he said. “I don’t think he’s arbitrary.”

‘The hero of the case’

Uhlmann has developed a reputation for being tough on industry. He’s written extensively about holding companies accountable for their actions and about the weight of environmental crimes, well before it was widely acknowledged.

Last April, he lamented America’s failure to “heed the [BP] spill’s wake-up call to reduce our nation’s dependence on fossil fuels and accelerate the transition to clean energy” in an Associated Press op-ed. A few months later, in The Atlantic, Uhlmann wrote about the mounting climate crisis, warning that the “extraordinary crises of today will seem small by comparison.”

His commentary on environmental issues has long been both powerful and expansive. He grabbed headlines in 2008 for his closing remarks in the aforementioned United States vs. Elias case, where he relied on environmental laws to criminally charge the owner for making his employee clean up cyanide sludge. Workplace safety laws did not apply because the victim did not die.

He told the court: "[N]o matter how industrialized our society, no matter how much most of us care about worker safety, there’s still some people who think workers are expendable and that their lives do not matter.” In 1999, Allen Elias was sentenced 17 years in prison — at the time the longest jail sentence ever imposed for an environmental crime.

“He kind of comes out as the hero of the case,” Buchsbaum, who also recently retired from the National Wildlife Federation, noted.

The story was later chronicled in “The Cyanide Canary,” a book that almost makes Uhlmann come across like a character in a movie. Though Lerner, one of his colleagues, laughed off the thought, saying: “He would be one of the most even-tempered, mild-mannered characters in a movie.”

In another major case, Uhlmann prosecuted what would be considered the first environmental justice case, United States v. Johnnie James Williams. Williams owned a drum reconditioning facility. “Numerous area residents testified at trial about how they could not sit on their porches at night because of the fumes from the drum reconditioning facility, which was across the street from their homes,” he said in a recent email. The charges came after a $1.5 million EPA Superfund cleanup of the site where thousands of hazardous drums were located.

Uhlmann said his interest in environmental issues was sparked after college when he got a job at ICF, a consulting firm that sent him to develop EPA plans for communities where Superfund sites were located.

“I learned from those experiences how pollution scars our communities, in both rural and urban areas, as well as the degree to which those problems are most often visited upon communities of color and those who are socioeconomically disadvantaged,” he said.

Should he be confirmed, Uhlmann will take a leave of absence from his position at University of Michigan, according to ethics forms obtained by E&E News. His wife, Virginia Murphy, also works at the university teaching environmental literature and environmental justice, according to the school’s website. In the ethics documents, Uhlmann vowed not to participate in any matter directly affecting the university’s financial interests.

He also promised to divest his interest in 20 companies, including Amazon, Microsoft, Goldman Sachs and FedEx. The documents also show he served as an expert witness for a waste management company. And he agreed he would cut ties with Gerson Lehrman Group Inc. and Guidepoint Group, two firms where he had consulting gigs, according to the documents.

Asked what he thought about being called an idealist who "lived to nail bad guys," he said: "Nothing I can say to top that."