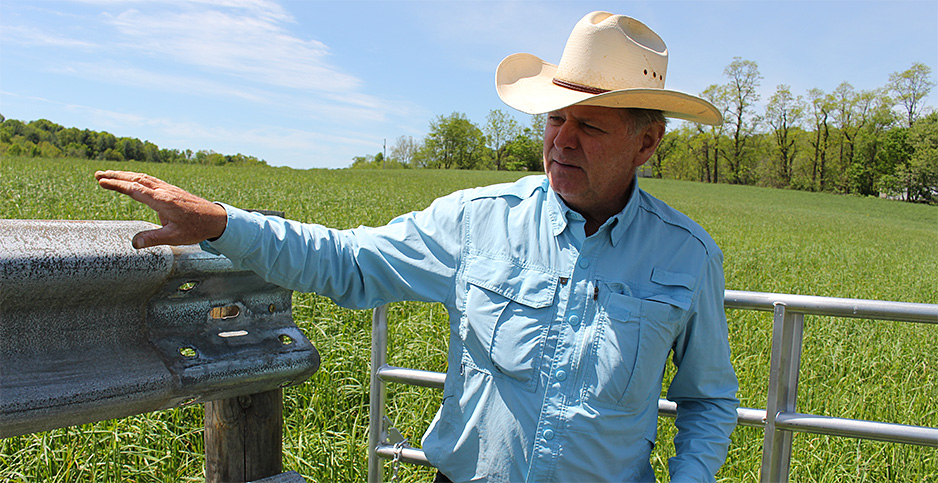 Bobby Whitescarver on his cattle farm near Churchville, Va. Conservation programs have allowed him to install a system of fences — including, in places, repurposed safety highway fences — to keep cows where they belong. Marc Heller/E&E News

CHURCHVILLE, Va. — The cows on Bobby Whitescarver’s 150-acre farm can’t get anywhere near the two streams that run through his property. When they’re thirsty, they gather around the half-dozen watering stations he’s put in remote areas of his fields — all connected through more than a mile of underground pipes.

Whitescarver didn’t install the system to help the Earth or keep runoff out of the Chesapeake Bay, about 175 miles to the east, although he considers those positive results. His motivation was closer to home — keeping his cattle from drinking dirty water or giving birth to calves in it — and may offer clues about how to make farmland conservation stick as the Biden administration ramps up programs to combat the climate crisis and reduce pollution.

"That’s the age-old question," Whitescarver said on a walk around his Shenandoah Valley farm recently. "How do you convince people to do something they don’t want to do?"

If agriculture is to play a big role in addressing climate change and other environmental challenges, farmers like Whitescarver will be key to success or failure. Many federal programs don’t have enough money to help all the farmers who apply, but to make an impact on climate change and conservation, even more farmers will need to be coaxed in through more flexible rules and a lot more money.

Unlike many of his neighbors, Whitescarver said, he embraces government conservation programs, as well as technical assistance from nongovernmental sources such as the Chesapeake Bay Foundation, where he used to work and where his wife, Jeanne Hoffman, is a member of the board of trustees.

Most of the conservation practices Whitescarver has undertaken — the watering stations and pipelines, trees he’s ordering to plant alongside streams, the 2 miles of fences to support rotational grazing for 50 or so beef cattle — were paid for in part through a web of programs, he said. He’s benefited, too, from a $42 million settlement reached in 2017 between the state of Virginia and DuPont, which released mercury into waterways from its plant in Waynesboro, Va., from 1929 to 1950. Some of that money flowed to the U.S. Fish and Wildlife Service and eventually to Whitescarver’s farm.

Taken together, Whitescarver’s practices play a role in climate change as well as clean water. His less-intensive approach allows the soil to retain carbon, which one day could play into more widespread carbon credits and markets.

On the federal level, the Biden administration has pledged to boost conservation programs in response to the climate crisis and to help meet a goal of conserving 30% of land and water by 2030. The Agriculture Department would steer farmers toward practices shown to save carbon in the soil and pay them more for taking some land out of crop production, for instance.

Congress is moving on the issue too, considering legislation to encourage privately run carbon markets, including creating a certification system through USDA to help farmers pick consultants who can verify their on-farm carbon savings to participate in the markets (Greenwire, April 22).

For all that momentum, though, the ultimate success lies in decisions, farm by farm, in places like the rolling hills of central Virginia.

Some farmers will need convincing. Many don’t want the government in their business, said Whitescarver, who once worked for USDA’s Natural Resources Conservation Service. Others are just comfortable with the ways they’ve farmed for a generation. Few sign up just out of a sense of civic responsibility, he learned at the NRCS. "I only had one farmer tell me he did it because it was the right thing to do."

In some ways, USDA’s biggest difficulty in running conservation programs isn’t finding farmers to enroll but being forced to turn them away. Several programs can’t accept all the farmers who’ve applied because there isn’t enough money.

"At this point in time, with demand far outstripping the supply of dollars in federal farm conservation programs, I do not believe we are in any danger of doubling or tripling the amount of funding available and having trouble using the money," said Ferd Hoefner, an agriculture policy consultant and founding policy director at the NSAC.

The question for policymakers: Would even that much be enough, and would it go to the right places to make the most difference?

Whitescarver, 65, and his wife already had a small farm about 9 miles away when they found this one by accident in July 2020, passing a "for sale" sign on the nearby Buffalo Gap Highway. They named the property Whiskey Creek Angus, for the stream that borders it.

Whitescarver said he’s not sure where the name Whiskey Creek originated, though the region has hard drinks in its heritage. "They say there were more stills than churches here at one time," he noted.

The couple immediately spotted trouble. Whiskey Creek ran along one side of the farm, and an unnamed stream ran on the other. Cattle sloshed freely in both.

Neither body of water is more than a few feet wide. The unnamed creek — which they started calling Rye Branch — is so modest, it’s obscured by tall grass in places and confined to a culvert near the end of his driveway. "You wouldn’t think there’s a creek in there," Whitescarver said.

But it still needs to be protected from manure runoff. He’s tapping money from conservation programs and design help from the Virginia Department of Forestry to transform the stream bank into a buffer against runoff from the pastures. "We’re going to plant every native tree we can," he said.

With the streams off-limits, Whitescarver laid out a series of pastures, separated by new fences, for a rotational grazing system. Cattle chew down the grass one section at a time, enriching the soil with manure and moving on to the next area and leaving the last one to grow back.

While the method isn’t new, it’s gaining fresh attention with the Biden administration’s focus on climate change. Researchers say that rotational grazing reduces greenhouse gas emissions, since cattle aren’t disturbing the ground as intensely, and that the benefit grows the longer farmers keep up with the practice.

The method works fine for dairy cows as well as for the beef cattle Whitescarver keeps. Like many of his neighbors in the Shenandoah Valley, he raises black Angus cows and calves, feeding them for about nine months before selling them to other farms. Eventually, they’re sold again to feedlots — typically out of state — where they fatten up on grain before becoming steak, roasts or ground beef, according to Virginia Tech’s cooperative extension service. Virginia has up to 750,000 beef cattle on 23,000 farms, the service reported.

On a sunny afternoon, Whitescarver rumbled his pickup into the pastures, a rough ride thanks to thick midspring clumps of grass about 8 inches high. To the average person, grass might be just grass — but not to Whitescarver, who stepped out and surveyed the growth around him with some disappointment.

Encouragingly, he found plenty of orchard grass, slightly sweet to taste and good for cows. But it was mixed in with buttercups, which are bitter, thistles that are sharp, and Kentucky fescue, which can raise a cow’s temperature 3 degrees and stunt the growth of nearby trees through chemicals it releases.

"We call that the green death," Whitescarver said.

Maintaining pastures for livestock in the age of climate change will be about more than fencing them off and leaving them alone. Whitescarver said he mixes in some clover and applies weedkiller sometimes to keep out invasive plants toxic to cattle. In other areas, he lets the grass grow, to be cut for hay three or four times a year.

While the science of climate change — and conservation’s role — may be clear, the psychology in farm country isn’t so clear-cut. Agriculture Secretary Tom Vilsack has told lawmakers he’s convinced farmers are ready to take on more practices if the government expands opportunities, many of which are already in place (E&E Daily, April 15).

But the reality may be more nuanced, said Tim Palmer, an Iowa farmer who’s past president of the National Association of Conservation Districts.

"It’s not that they won’t," Palmer told E&E News. "It’s that they feel uncomfortable doing it because it’s out of the norm."

Conservation standards also become built into the farm equipment industry, Palmer said. Since 1985, for instance, the federal farm bill has set a standard of 30% crop residue left on fields for reduced tillage, and equipment has built around that standard, he said.

As farmers consider leaving even more residue on fields, equipment sometimes can’t keep up. And then farmers blame the no-till practice rather than the equipment that hasn’t changed with improved methods, he said.

"You don’t just change one thing, you change four or five," Palmer said. "We’ve got to deal with all these problems to solve the big one."

In some ways, the programs are built in ways that discourage farmers — and would benefit from tweaking to spur more participation, said Charles Isbell, a farmer in Hanover County, Va., at a House Agriculture subcommittee hearing this week. In addition to funding and staff shortfalls at NRCS, he said, some programs are too restrictive and shut out farms with environmental conditions that can’t be corrected in short time frames. Program rules should be revised to allow for upfront payments from USDA, he said.

"Currently, many producers are discouraged to apply due to the financial burden having to spend the upfront capital costs to implement the program, in hopes for reimbursement at a later date," Isbell said.

Some groups are urging USDA to redirect at least part of its conservation efforts away from big livestock farms, or concentrated animal feeding operations, to small farms like Whitescarver’s. In comments submitted to USDA on addressing the climate crisis, the Natural Resources Defense Council asked the agency to focus the Environmental Quality Incentives Program away from CAFOs, "to climate-smarter practices, such as regenerative grazing and transitioning to sustainable pasture-based production, which are more likely to reduce agriculture’s negative environmental footprint."

However the details work out, Whitescarver said he sees opportunities unfolding for his fellow farmers.

"When the wave is up, you get your surfboard up and ride the wave," he said. "We got in when the wave was up."