The birth and troubled childhood of an American supergrid 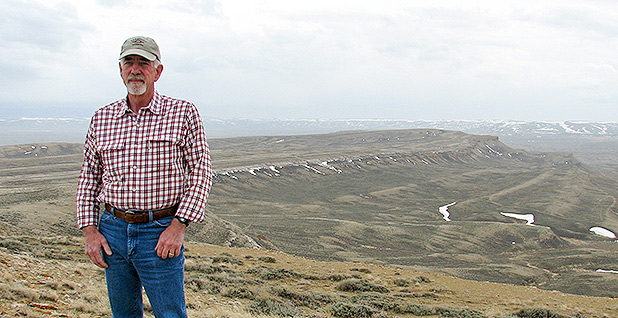 Bill Miller, president of the Power Company of Wyoming, stands on a ridge at the Overland Trail Cattle Co., a few miles south of Rawlins, Wyo., in this 2009 photo. Miller and the ranch's owner, Denver-based Anschutz Corp., hope the wind power being built there can be exported to California. Photo courtesy of AP Images.

It may seem ironic that the pioneer of projects that could lead to the sharpest increase in emissions-free electricity in the United States started in Wyoming, the state that leads U.S. production of coal, ranks in the top 10 for natural gas production and pumps 2 percent of the nation’s oil.

The project started with a 320,000-acre cattle ranch in Carbon County on Wyoming’s southern border. In 2006, Philip Anschutz, the ranch’s billionaire owner, put it up for sale. Then one of his top aides, Bill Miller, pointed out that the ranch is swept by some of the steadiest, most powerful land-based wind resources in the world.

If there were some way to capture and transmit the ranch’s wind energy to California, one of the world’s richest markets for emissions-free electricity, that would certainly be a better economic proposition. Anschutz could keep the ranch, continue to raise cattle on it and harvest its formidable wind energy at the same time. Was that possible? Miller and Anschutz did some research and discovered there might just be a way.

By then, a technology called high-voltage direct-current (HVDC) power lines had matured and seemed ready for the task. Most Americans think of Thomas Edison when it comes to direct current, which he used to light up Lower Manhattan in 1882. But Edison’s DC proved to be too weak to move electricity much more than a mile beyond a power plant. A Serbian-American inventor, Nikola Tesla, came up with a better idea using an alternating current, or so-called AC electricity, that moved in a regular, wavelike pattern. He also invented a transformer that could step up AC power to carry it over longer distances.

The world of electricity transmission initially moved in Tesla’s direction, but in 1954, a persistent Swedish engineer, Uno Lamm, proved he had solved Edison’s problem by sending DC power from Sweden’s electric grid through an undersea cable to the island of Gotland, 60 miles away in the Baltic Sea. He had invented new controls that made DC electricity lines far more capable of moving electricity over long distances than AC could.

It was a bold accomplishment, and in 1961, the Kennedy administration approved a much more ambitious DC project called the Pacific DC Intertie, an above-ground power line that could move electricity from hydroelectric dams in the state of Washington to markets in Southern California. Private power plant owners in California lined up against the line. Then ASEA, the company that Lamm worked for, sent him to the United States where he convinced experts that importing cleaner DC power would save California’s consumers $600,000 a day when the line was completed in 1970, which it did.

DC power lines also have other ways of selling themselves. ABB, the Swedish-Swiss multinational engineering firm, which later took over ASEA, built a DC power line in the 1990s carrying hydroelectric power from Quebec to Montreal and into New England. On Aug. 14, 2003, the more sophisticated and muscular controls on this line stopped the massive blackout in the northeastern United States from cascading into Canada and then helped the U.S. power grid restore power more quickly.

The project that Anschutz and Miller put together is a variant of this line. Called the TransWest Express, it would extend 730 miles from Sinclair, Wyo., to a connection point just south of Las Vegas near Hoover Dam. There, its estimated 20,000 gigawatt-hours per year would be converted into AC power and flow into the grid that serves California and other Southwest markets.

Most of its electricity would come from 1,000 wind turbines that would be installed on the ranch, rechristened as the Chokecherry and Sierra Madre Wind Energy Project. Miller, who formerly explored and bought land rights for Anschutz’s oil and gas projects, was elevated to be president of the Power Company of Wyoming, which would oversee the construction of the wind farm.

He also became president and CEO of TransWest Express LLC and would oversee the construction of the HVDC line, which would cost another $3 billion. A genial man who has repeatedly explained that he and his boss are in this project for the money and are not necessarily environmentalists, Miller has dealt with many skeptics in his new job.

They include some from California, where some businesses and the administration of Gov. Jerry Brown (D) favor local wind and solar power rather than renewable energy imported via an HVDC line. Miller is quick to point out that Brown signed a law in October 2015 that requires state-regulated utilities to meet a 50 percent renewable energy standard by 2030.

"For California to meet that energy standard in the time frame they’re talking about is going to be difficult. It will be less difficult if some of that power comes from outside of the state. There is an unfilled capacity between now and the time they get to 50 percent on the renewable side. We can satisfy some of that. So will others," Miller predicted.

A flurry of new power lines

Wyoming already seems satisfied. The projected wind farm is so big it may require a man camp and a railroad spur to the site and take up to 950 installers and construction laborers per year to build it once the whole project is approved. It will also create 114 permanent jobs, making it one of Carbon County’s largest employers.

"It makes economic sense for California to obtain a portion of their renewable energy from Wyoming," said Loyd Drain, the former head of the Wyoming Infrastructure Authority. The authority commissioned a study that shows that Wyoming wind energy delivered by an HVDC line like the TransWest Express project will save Californians "up to $1 billion in annual generation costs."

Another sign that the electricity market’s winds may indeed be blowing in Anschutz’s direction are other companies that have since jumped in with proposed, for-profit HVDC lines, which are called "merchant lines" in the business. Some of them, like TransWest, are aimed at bringing renewable energy from Great Plains states to California and the Southwest. Others, such as Houston-based Clean Line Energy Partners, are more interested in moving cheap and abundant wind power from Plains states to markets hungry for renewables in the East.

Michael Skelly, president of Clean Lines, said the company began proposing projects six years ago. Most of his staff, like Skelly, are veterans from the wind industry, builders of wind farms across the country. The way the U.S. power grid — which is primarily based on short distance AC power lines — works means that areas with abundant wind are often locked into small market niches where electricity prices are abnormally low.

"As we looked at the industry going forward, it doesn’t take a rocket scientist to conclude that the key to expanding renewables is to expand the grid in order to accommodate them," Skelly explained.

Clean Line’s investors started with a subsidiary of Ziff Brothers Investments, a New York-based venture capital firm, and attracted several other capital sources as its proposals grew. Its flagship project is the Grain Belt Express Clean Line, a 780-mile HVDC line that would bring wind power from near Dodge City in western Kansas across northern Missouri and Illinois to a point in eastern Illinois, where its power would be converted to AC and flow into the PJM Interconnection, a wholesale electricity market that would feed the power as far as the East Coast.

Other HVDC projects include the 500-mile Rock Island Clean Line, which would bring abundant wind power in northwest Iowa into central Illinois and the Chicago area; the Centennial West Clean Line, a 900-mile line feeding wind power from New Mexico and Arizona to California; the Plains & Eastern Clean Line, a 700-mile line from the Oklahoma Panhandle to Tennessee, Arkansas and other markets in the mid-South and Southeast; and the Western Spirit Clean Line, which would carry wind power 140 miles from east-central New Mexico, feeding it into markets farther west.

The growing stream of U.S. long-distance proposals has also attracted companies with long experience in building and operating HVDC, the main one being National Grid, the U.S. subsidiary of the company that operates the systems that market gas and electricity across Great Britain.

Located in Waltham, Mass., National Grid has invested $40 million in Clean Line’s projects, as well as launching two of its own. One, Maine Green Line, would distribute a mix of wind-generated power from Maine and hydroelectric power from Canada. Another, Vermont Green Line, would originate in northern New York and feed wind and hydroelectric power mainly from an underground and underwater line through Vermont.

Stan Blazewicz, vice president of U.S. business development for National Grid, explains that as two aged nuclear power plants are shutting down in New England, the demand for low-cost clean energy is soaring. Most states in the region have set targets for 80 percent renewable power by 2050.

"Those drivers are so strong that there is little chance that these states are going to back away from their public policy goals," he said.

Exactly what policy the U.S. government will adopt toward the surge of interest in merchant-driven HVDC lines remains unclear. There are two studies that show possible futures. One, released in 2012 by the U.S. Department of Energy, included participation from industry and university experts. It calls for more HVDC lines and interconnections to help promote long-distance flows of wind power throughout the nation. It also calls for large batteries and other forms of storage to eliminate the variability of wind and solar power that can impede transmission.

Another study, released in January by a team of weather and grid experts formed by the National Oceanic and Atmospheric Administration, proposes a "Super Grid," a 30,000-mile nationwide network of HVDC lines that can create a national market for excess wind and solar power by quickly distributing renewable energy to places anywhere in the United States that need it. In theory, this grid would eliminate the need for storage.

Both studies aim at 80 percent reduction of emissions from the nation’s electricity system by 2050 — which would provide substantial help to efforts to mitigate climate change — however, they differ on costs and the mix of transmission systems that will be needed to reach the target.

"Keep in mind that we both see a cleaner energy future, but we show two different pathways to getting there," explained Bryan Hannegan, an associate director of the National Renewable Energy Laboratory at Golden, Colo. He is co-chairman of a consortium of DOE-funded national laboratories working to provide the technologies needed for the future power grid.

Just where Republican presidential nominee Donald Trump, who has called climate change a "hoax," might stand in a battle over the nation’s future power grid remains a mystery. Democratic contender Hillary Clinton, however, recently put a statement on her campaign website that sent a little electric charge through some of the many experts involved in this murky, but important, debate. Somebody was listening.

Without stating how she might do it, Clinton promised that in the next 10 years she will add more renewable power "generation capacity to the grid than during any decade in American history."

Tomorrow: Running a gantlet of regulators.