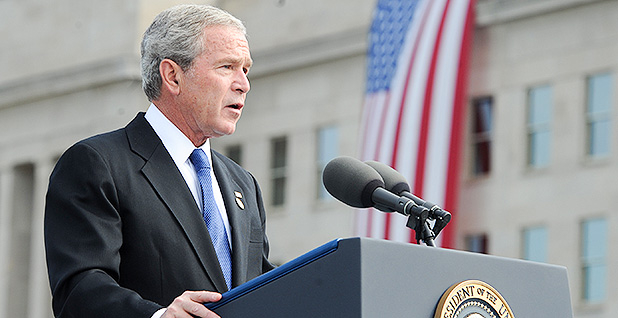 Word got out in September 2002 that the George W. Bush administration had axed a chapter on climate change from an annual U.S. EPA report about air pollution.

Environmentalists were furious. John Walke of the Natural Resources Defense Council recalls marshaling about a dozen interns to EPA’s Washington headquarters to protest. They put black electrical tape over their mouths to represent censorship of climate science, Walke said.

That was just one of several instances when the Bush administration was accused of meddling with government reports to water down or remove discussions about climate change. Now, after a draft federal climate change report surfaced this week, greens who went to war against the Bush administration’s environmental policies are watching closely for similar — or even more overt — interference.

"The preliminary signs and the public views of the political actors in 2017 are much worse than they were in 2001 and 2002," Walke said.

Scientists and environmentalists will be scrutinizing how the Trump administration handles the National Climate Assessment, a draft segment of which was published by The New York Times on Monday. The draft contains conclusions about climate change — including a statement that humans are primarily responsible — that contradict what some members of the Trump administration have stated.

A White House official said in an email that "drafts of this report have been published and made widely available online months ago during the public comment period. The White House will withhold comment on any draft report before its scheduled release date."

The episode is giving some a sense of déjà vu.

"It did harken back to what happened in the Bush administration," said a former EPA official who worked at the agency during the Bush years. "This is 15 years later, there’s so much more science than there was then. … It’s sad to think that there’s still a controversy over it, if in fact the administration does decide to pull the language or significantly change it."

In 2002, the Times reported that the Bush administration deleted a section on global warming in a report on air pollution. The move was made by top EPA officials and approved by the White House. It reversed a practice started six years earlier of including climatic impacts in the report.

And in June 2003, the Bush administration came under fire again from critics after reports surfaced that the White House had cracked down on language in an EPA report, removing references to studies finding that global warming was caused at least somewhat by rising emission levels from smokestacks and automobiles and could threaten health and the environment.

Jeremy Symons, a former EPA climate official who moved to the National Wildlife Federation, penned an op-ed in The Washington Post in July 2003. "What began with the Bush administration exercising its discretion over policy choices on global warming has devolved into attempts to suppress scientific information," he said.

Symons, who’s now at the Environmental Defense Fund, said this week in an interview that the draft climate report now under review will be a "clear test" about "to what degree the Trump administration is going to politically interfere with climate science."

He and other critics of the Trump administration say they expect political interference with climate science reports to be more extensive than it was during the Bush years. They point to a diversity of views about climate science among top Bush political appointees.

Under Bush, "you had a person in the White House that was leading the effort against the wishes of the EPA administrator and the science team," Symons said.

Under Trump, Symons said, "You have the head of EPA and the president himself who are hostile to climate science, and there’s no telling what the limits of their interference will be. … I think that Trump and [EPA Administrator Scott] Pruitt have been pretty clear that they’ll go to great lengths to try to prove that climate change isn’t real despite the best science."

Pruitt has said of human activity, "I would not agree that it’s a primary contributor to global warming that we see." The EPA boss has also called for an intensified public debate about climate science, an idea that has many climate scientists fuming.

Trump, for his part, has called global warming a "hoax" and "bullshit" in the past, although he’s skirted the topic of climate science since becoming president.

During the Bush years, deleting climate language from official reports may have done more damage to the administration’s agenda than if it had simply left it in, said the former EPA official.

"What it ended up doing was ramping up the pressure on them to do something on climate because it made it a higher-profile issue," that person said. However, that pressure "did not end up forcing them to do anything, they pretty much kicked the can down the road … and delayed doing much on climate."

Clarification: The draft report released by The New York Times this week was a science section of the National Climate Assessment, not the full assessment.