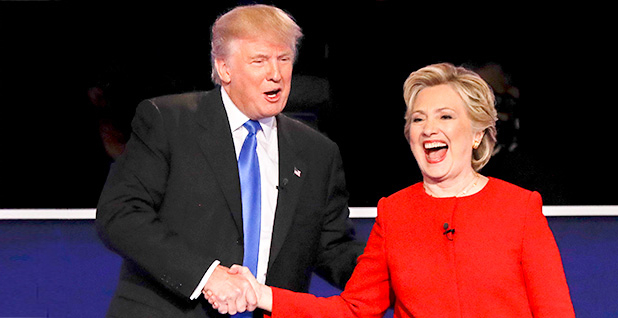 Republican presidential candidate Donald Trump denied last night in a debate with Democratic nominee Hillary Clinton that he had ever called climate change a "hoax" created by the Chinese. His tweets tell a different story. Photo courtesy of AP Images.

Donald Trump refuted accusations by Hillary Clinton that he had once described climate change as a Chinese concoction, during a quarrelsome debate last night that set the candidates on a 42-day sprint toward the presidential election.

Twelve minutes into the first face-to-face encounter between the candidates, Clinton raised the issue of climate change by pointing to Trump’s past claims that question the science behind rising temperatures.

"Donald thinks that climate change is a hoax perpetrated by the Chinese," Clinton said as Trump interrupted.

Clinton appeared to be referring to a tweet by Trump on Nov. 6, 2012, when he said, "The concept of global warming was created by and for the Chinese in order to make U.S. manufacturing non-competitive."

Years later, Trump said the tweet was a joke.

He also several times has explicitly called climate change a "hoax," including in a string of tweets throughout the winter of 2013 and early 2014. "Ice storm rolls from Texas to Tennessee — I’m in Los Angeles and it’s freezing. Global warming is a total, and very expensive, hoax!" he said in one.

The interaction on the debate stage was the most recent reference to climate change in a string of increasingly frequent accusations by both sides, as the candidates try to invigorate potential voters in a race with tightened polling.

"I think it’s real," Clinton said last night during the debate at Hofstra University on Long Island, N.Y. "I think the science is real, and I think it’s important that we grip this both at home and abroad. And here’s what we can do. We can deploy half a billion more solar panels. We can deploy enough clean energy to power every home. We can build a new modern electric grid. That’s a lot of jobs."

Trump did not repeat an attack that he unveiled last week, when he suggested that Clinton supports a far-reaching climate program aimed to make energy producers and large electricity customers, like manufacturers, pay for the carbon dioxide they release.

"She talks about solar panels," Trump said last night, before apparently referring to the bankrupt firm Solyndra. "We invested in a solar company in our country; that was a disaster. They lost plenty of money on that one. Now, look, I’m a great believer in all forms of energy. But we’re putting a lot of people out of work. Our energy policies are a disaster. Our country is losing so much in terms of energy."

The debate further punctuated the candidates’ different philosophies on climate change and the extent to which they view the issue as electorally beneficial.

Clinton has ‘no intention’ of proposing a tax

Trump, who has called global warming a "hoax" and questions whether substances in products like hair spray can deplete the ozone layer, began a new line of attack last week by claiming that Clinton supports a national price on carbon dioxide. It echoes GOP attacks from 2010, the year that Republicans took control of the House by winning 63 seats after Democrats pursued aggressive measures on climate change and health care.

Norman Ornstein, an electoral scholar with the American Enterprise Institute, said Trump is raising suspicions about a carbon price to energize predominantly white, rural voters who might skip the election. Trump might be betting that moderate Republicans take little notice of his climate policies or just don’t care about the issue.

"He is also assuming that for most of them, and for a lot of independents, climate change will not be a defining issue," Ornstein said. "And finally, he wants to solidify support among coal country voters, especially in places like Pennsylvania."

Clinton has gone out of her way to avoid those potent attacks. In the Democratic primary, she risked alienating liberal voters by not answering Vermont Sen. Bernie Sanders’ questions about whether she supports a carbon tax. It was a calculated decision, to avoid the kind of attack that Trump leveled last week. Her approach was diluted when Sanders’ supporters included a reference to carbon pricing in the Democratic platform.

"The truth is she has no intention whatsoever of advocating a carbon price because it has proven a political disaster repeatedly," said Paul Bledsoe, a consultant who worked on climate issues under President Bill Clinton. "So there’s simply no basis for Trump’s attack that she supports it now."

Last week, Trump suggested that Clinton might unleash a "massive new tax" on electricity that could hurt homeowners and businesses.

That’s inaccurate now. But Clinton did promote a carbon price during her primary fight with then-Sen. Barack Obama (D-Ill.) in 2008. She proposed a cap-and-trade system covering "100 percent of the nation’s carbon dioxide emissions."

‘Where do I start with you?’

Now, Clinton’s climate agenda is centered on defending and expanding President Obama’s executive actions, like the Clean Power Plan. Many environmental organizations and economists, including some conservatives, believe that carbon pricing will be needed to meet the nation’s long-range goal to cut greenhouse gas emissions 80 percent by 2050.

The Clean Power Plan is also considered a carbon price, though an indirect one. The White House released a report last week that said as much. It also seemed to endorse the idea of something like a carbon tax.

"While over the President’s terms the Administration has pursued a number of policies that indirectly price carbon-emitting activities, going forward, a widely-held view across a broad spectrum of economists is that policies that put a direct, uniform price on carbon are the most efficient and comprehensive way to both meet the goals set forth in the Paris Agreement and efficiently transition to a clean energy economy," the report said.

Trump isn’t the only one using climate change to his advantage.

Sen. Tim Kaine (D-Va.), Clinton’s running mate, has been raising the issue with increased frequency. His message? Democrats, especially younger ones, had better vote in six weeks to prevent Trump from winning.

"Donald Trump says he wants to tear up that Paris accord that nearly 200 nations have committed to because he says climate change is a hoax," Kaine said in Reno, Nev., last week. "My opponent for vice president, [Gov.] Mike Pence from Indiana, says it’s a myth. I mean … if you don’t accept science, where do I start with you? Where do I start with you? We’ve got to win this race, because this generation especially knows we’ve got to do the right thing in this country and around the world to battle against climate change."

On Friday in Houston, Kaine again mentioned climate change near the top of his remarks. He said the election is analogous to America looking in the mirror.

"Do you believe in climate science, or don’t you?" Kaine said. "If you do, you should vote for Hillary and Tim, because the other guys are against you."

A new adviser who will take climate denial ‘to the grave’

Last night’s debate also coincided with revelations that Trump’s campaign has named Myron Ebell, who questions the accuracy of mainstream climate scientists, to its transition team for U.S. EPA. One Republican who has worked on previous transition efforts questioned whether Ebell’s experience at a think tank, the Competitive Enterprise Institute, will sufficiently help him communicate with agency staff.

"I’m sure Myron will work very hard, but he has no direct agency experience," the Republican said. "That will make it tough for him to sniff through the [agency] B.S."

Others point to Ebell’s long record of opposing climate policies that, they say, would have no noticeable effect on temperatures.

"He’s very knowledgeable, there’s no doubt about that," said Patrick Michaels, director of the Center for the Study of Science at the Cato Institute. "He will give good advice, and he will probably be fairly careful about what he says and what he advises."

Ebell has taken an aggressive role to make a carbon tax "toxic" to Republicans who might support it in return for cutting corporate taxes. He also played a role in defeating cap and trade in 2010 by promoting it as "cap and tax."

"He is absolutely convinced that climate change is a dubious scientific fact and that it will not have negative consequences for the U.S. economy or the world at large," said Jerry Taylor, president of the Niskanen Center, a libertarian think tank that promotes a carbon tax. "He will take that belief to his grave."