The Clean Power Plan is gone — and there’s no ‘replace’ 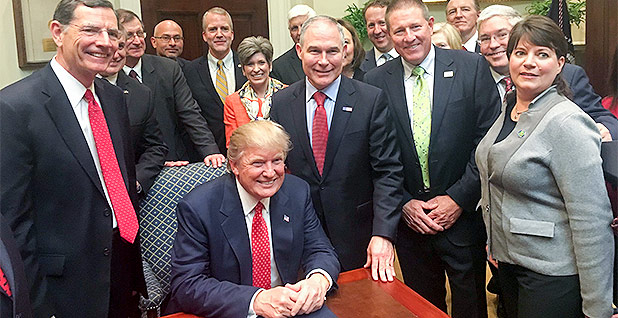 President Trump after signing an executive order to roll back the Obama administration's Waters of the U.S. rule. A rule taking aim at the Clean Power Plan is still in the works. Photo courtesy of @NACoTweets via Twitter.

The White House intends to unravel the Clean Power Plan without providing a replacement, according to a source briefed on the issue.

An executive order expected to be released next week also instructs the Justice Department to effectively withdraw its legal defense of the climate rule in the U.S. Court of Appeals for the District of Columbia Circuit. The move aligns the White House with about two dozen Republican state attorneys general who are challenging the way the rule restricts greenhouse gas emissions at power plants.

The result, if successful, would mean the case is "frozen in place," the source said, preventing the D.C. Circuit, which has six judges appointed by Democrats and four by Republicans, from issuing an opinion this spring. Other legal experts say the case could continue if states or other groups go on defending the rule.

"Justice goes to the court and says … ‘Don’t waste your time trying to put together an opinion when the legal basis for the case that you’re reviewing could potentially go away,’" the source said. "Normally, a court will grant that. There’s no guarantee."

That raises questions about whether EPA would fail to satisfy legal requirements to regulate carbon dioxide and other climate pollutants.

The agency in 2009, responding to the Supreme Court, determined that greenhouse gases endanger human health. That requires EPA to regulate emissions, and the agency did that by promulgating the Clean Power Plan.

"I think, as a matter of law, that carbon is a pollutant has been settled," said Christine Todd Whitman, who served as EPA administrator under President George W. Bush. "EPA has to act once you have that kind of a finding."

Waiting for the ‘right time’?

The new details are surfacing as the White House confirmed yesterday that the executive order’s release would be delayed. It was scheduled to be signed by President Trump this week. Now that will likely occur next week.

The delay follows successful efforts by Ivanka Trump, the president’s daughter, and her husband, Jared Kushner, to remove language from the order that was critical of the Paris Agreement on climate change.

The current order does not refer to the global pact, and the source said that issue did not hold up the order’s release. The delay was caused by the rise of other priorities, including the release of the Republican health care proposal Monday, the source said.

Coal companies and mining groups, which Trump described as being victimized by the climate rule on the campaign trail, have waited patiently through the delays. But now that he’s 49 days into his presidency, there are subtle signs that industry wishes he would act more swiftly.

Jeff Holmstead, a former assistant EPA administrator under Bush who represents opponents to the rule, said it’s likely the White House is waiting for the right time to unveil the rule with maximum effect.

"I hope it’s soon," he added. "I think everybody, certainly all of my clients, think the Clean Power Plan is dead. But there’s always uncertainties."

For some Democrats, the order represents a tightrope walk. It’s bound to be challenged in court by liberal state attorneys general and environmental groups for not providing an alternative to the Clean Power Plan. But if it did provide one, Republicans in coal states would likely feel that Trump had abandoned his campaign promise to terminate the regulation.

"It’s not like [Senate Majority Leader] Mitch McConnell [R-Ky.] will say, ‘OK, they’re gonna do a new rulemaking on power plants, so I’m sure it’ll be better,’" said Heather Zichal, Obama’s former climate adviser. "They fundamentally don’t think coal plants should be held accountable for their carbon pollution. So how do you deal with that piece? I think politically that’s hard for them."

Environmental groups are already promising to sue EPA for failing to comply with its own endangerment finding.

"If EPA withdraws [the rule] and does not replace it with strong standards, we will challenge the agency’s action in court," said Joanne Spalding, the chief climate counsel at the Sierra Club.

The administration anticipates that. The executive order instructs EPA to "revise or rescind" the Clean Power Plan, wording that’s meant to comply with the Administrative Procedure Act by letting EPA, not the White House, determine the fate of the rule.

The agency will then go through the long rulemaking process. But rather than promulgating a new rule, it will terminate an existing one. It will post notice and take comments and then put out a proposed rule. After accepting more comment, the action will be finalized. Then the administration is "off to the races in court," the source said.

The Clean Power Plan is just one part of the executive order, which is geared around "energy independence."

It does not address the endangerment finding, which is the underpinning of current and future EPA regulations on greenhouse gases. No decision has been made by White House officials about whether to attack the finding in subsequent actions, the source said.

"That is a huge issue," the source said. "That’s just going to require a lot of thinking."