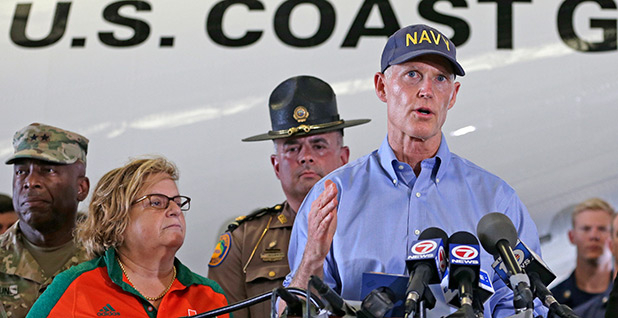 In the wake of Hurricane Irma, Rep. Ileana Ros-Lehtinen of Florida has been at the forefront of Republican calls for climate action.

With historic flooding in the East and South, and wildfires in the West, more and more GOP members are conceding the link between increases in carbon emissions and a changing climate, especially when their districts are impacted the most.

In an interview before the storm — which destroyed a quarter of the homes in the Florida Keys and left at least 12 people dead — Ros-Lehtinen stood on a driveway in her district sporting a Miami Hurricanes jersey. Speaking with Chris Hayes of MSNBC, the Miami-area lawmaker urged her GOP colleagues to take climate change seriously.

"The sea level is rising, and it’s going to wipe away Miami Beach, literally, not figuratively," she told the network in one of numerous storm-related television appearances.

"Our party needs to forget about who caused climate change and all of that nonsense and just say, ‘Look, this is real. Sea-level rise is science. It’s not somebody’s opinion, it’s guided by science.’"

In recent years, Ros-Lehtinen has voted in favor of methane pollution safeguards and sending funds to Flint, Mich., after lead contaminated the city’s drinking water.

She voted against offshore drilling measures, against a delay in a U.S. EPA smog rule and, most recently, against a measure that would have stripped language directing the Defense Department to prepare for the effects of climate change.

Ros-Lehtinen has also championed legislation to address the effect that sea-level rise and ocean acidification is having on coral reefs.

But she wasn’t always such an advocate.

In 2003, Ros-Lehtinen’s voting record on energy and environment issues earned her the low score of 15 percent from the League of Conservation Voters.

"It’s taken me a long time to realize what this issue is all about," she told actor Bradley Whitford in a segment of the documentary series "Years of Living Dangerously," which focuses on climate change.

"I no longer have the luxury of saying it doesn’t impact me, [or] that’s for somebody else. Well, the somebody else are these kids, they’re my grandkids. I understand that the science is real. It’s not a matter of believing or not, it’s that this is science, this is proven."

At a news conference last spring, she thanked Curbelo for "holding my hand, maybe kicking me in the can, and making me do the right thing" (E&E Daily, May 15).

In 2016, Curbelo and another South Florida representative, Democrat Ted Deutch, founded the bipartisan Climate Solutions Caucus with the goal of putting partisanship aside and advancing policies that make economic and environmental sense for their districts.

Curbelo uses conservative themes like fiscal responsibility and market solutions, humor, and the occasional fact about ocean acidification to move his fellow Republicans.

Ros-Lehtinen, who joined the caucus not long after its founding, now contends that the Republican Party should once again be the conservation party of President Theodore Roosevelt, she told Whitford.

"We’ve moved away from that, and now we think that in order to believe in the science of climate change, you have to be a nuts-and-berry tree-hugger, not that there’s anything wrong with that," she said. "But you can still believe in all the things you believe in as Republicans because conservation is a true Republican value."

The notion that curbing the release of greenhouse gas emissions is a conservative value is gaining steam. Faith-based organizations, conservatives for clean energy and libertarians are increasingly calling for fighting against global warming.

President Trump, however, has openly questioned mainstream climate science and called it a hoax. He also announced his intent to withdraw from the international Paris climate agreement, pursuing policies friendly to coal and other fossil fuel interests. He’s banned agencies from using the social cost of carbon in the rulemaking process.

Trump has also rescinded a number of Obama-era executive orders that aimed to facilitate extreme weather resiliency and planning. Most recently, he issued an order that would no longer require public infrastructure projects built in flood-prone areas to account for sea-level rise.

Ros-Lehtinen said increased flood risk linked to climate change should be considered when rebuilding after Irma. The storm ran up the entire 400-mile length of the state, and the full scale of devastation is not yet known, though an estimated 13 million people were without power yesterday evening and 180,000 remained in state shelters.

"It’s very difficult for people to rebuild. We shouldn’t allow buildings so close to the ocean’s edge," Ros-Lehtinen said in an interview with NPR. "All South Florida needs [is] to get wise when we rebuild and wise when it comes to dealing with the reality of climate change."

She added: "I think that they have a good mayor who’s doing his best."

Ros-Lehtinen, who has been in Congress since 1989, and was previously a member of the Florida Senate, was not available for comment. She was born in Havana, Cuba, and is a fierce critic of the Castro regime there.

The contingency of GOP climate action advocates will shrink, however, because the congresswoman will not seek re-election after serving 29 years in the House.

Since Ros-Lehtinen announced last April that she would retire, a slew of Democrats are vying to fill the rare open seat, the latest of which is Matt Haggman, former program director of Miami’s Knight Foundation.

He said that one of the Democratic-leaning district’s greatest challenges is that sea-level rise was being ignored. "We’re not building for the future," he told the Herald.