The climate law — and its billions — changed everything 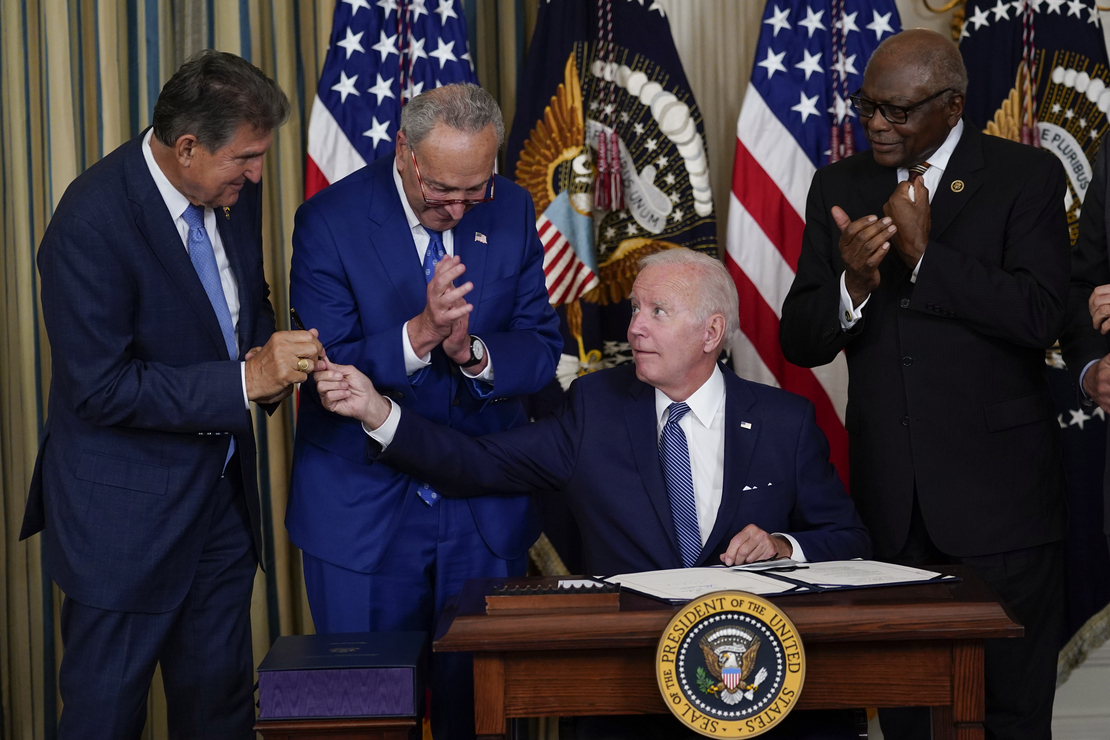 The climate world is suddenly rolling in dough.

Following decades of failed attempts to enact sweeping climate change legislation, Democrats eked out a bill this summer that funnels nearly $370 billion toward climate and renewable energy programs. The huge new cash flow and the fine print of the law behind it are overhauling how climate policy works.

“Holy shit, this is a ton of cash — all about building a clean energy economy. And we’ve never done this,” said Sam Ricketts, co-founder of Evergreen Action and a senior fellow at the Center for American Progress.

The new climate law is already changing everything from how consumers buy cars and how green groups are organizing to which policy experts are suddenly in high demand on Capitol Hill and K Street. And nearly two months after President Joe Biden signed the climate bill into law, policy wonks, businesses, lawmakers, environmentalists, administration officials and others are still trying to make sense of how it’s all going to work.

“The country hasn’t embarked on this level of industrial transformation since the New Deal,” Ricketts said. “This is going to be a thing we are all going to be figuring out together. … I mean, the CEO of the energy storage company, the line worker at [International Brotherhood of Electrical Workers] in Missouri, the environmental justice advocate in Houston and [a policy advocate] in Washington, D.C.”

For comparison, the behemoth stimulus package enacted in 2009 spent about $90 billion on renewable energy and energy efficiency programs, an amount the Obama administration heralded at the time as “the largest single investment in clean energy in history.”

Gina McCarthy, just before she stepped down as Biden’s climate adviser, joked last month that she had “grown into” being able to talk about climate funding in billions, rather than millions. “It was a hard journey for me,” she said. When she led the EPA during the Obama administration, she added, the agency’s entire annual budget was a little over $8 billion.

And the $370 billion figure included in the legislation Democrats have dubbed the Inflation Reduction Act is just part of the money being invested to boost renewable energy and combat climate change.

“That’s just the tip of the iceberg,” said Paul Bledsoe, a climate policy expert and strategic adviser for the Progressive Policy Institute.

Bledsoe estimates the combined government climate and clean energy spending from the Inflation Reduction Act — along with recently passed laws to fund technology manufacturing and infrastructure — will be about $514 billion.

Overseeing the rollout of all those game-changing billions: longtime Democratic insider and climate policy expert John Podesta, whom Biden hired to lead a new White House office focused on implementing the law.

He’s the administration’s point man on ensuring all that money is flowing where it’s supposed to and that the panoply of federal agencies with obligations under the law is working together.

“As we build a clean energy economy, we know that we have to get implementation right,” Podesta told reporters earlier this week. “That means we have to listen, engage and move quickly to translate policy into action.”

Podesta was announcing an effort to encourage the public to weigh in on the climate and renewable energy tax incentives included in the climate law.

The bulk of the climate and energy funding from the new climate law — $270 billion of the nearly $370 billion total — will be delivered through tax incentives, making the Treasury Department and the IRS key players in achieving the Biden administration’s climate goals (Greenwire, Oct. 5).

Treasury, EPA and the Energy Department are among those staffing up to implement the new climate law (Greenwire, Sept. 29).

Agencies aren’t the only places hiring and reconfiguring their staffs. Government spending experts, tax incentive specialists and Democratic Capitol Hill staffers who worked on the climate legislation are likely to be in particularly high demand for advocacy groups, lobbying firms and businesses (E&E Daily, Sept. 20).

“We’re gonna need more of everybody in the clean energy space,” said Joe Aldy, a professor at Harvard Kennedy School who served as an energy and environment aide in the Obama White House. That includes more lawyers, engineers and domestic workers who can build and install clean energy technologies, he added. “We’re transforming the economy; that’s the goal here.”

Environmental advocacy organizations, meanwhile, are shifting their focus, too. Many of them hailed the climate law as a major win, even though some are wary of the looming prospect of legislation to speed up infrastructure permitting as well as provisions in the law that require oil and gas leasing (Greenwire, Oct. 6).

Now, groups who pushed for the climate law are pivoting to implementation. That will involve engaging with agencies as they design new programs, helping partners such as states and businesses take advantage of new opportunities and communicating success stories, said Ricketts.

Advocates are also planning to press the administration to keep its promises to ensure that federal investments reach disadvantaged populations.

“This is a significant amount of money, and the important thing now is to make sure it gets to the communities that deserve this funding,” said Rachel Cleetus, policy director with the Union of Concerned Scientists’ climate and energy program.

The elephant in the room

As the climate world reconfigures around all this new spending, there’s looming uncertainty about how the GOP could soon attempt to upend Democrats’ efforts.

If Republicans win the majority of either chamber of Congress in next month’s midterm election, they’ll have much more power to investigate Democrats’ climate spending, much like they focused on the Obama administration’s energy spending when the GOP flipped control of the House in 2010. Republicans would also gain more power to block spending for agencies and programs.

“Perhaps there will be some nefarious attempts, and we have seen under the previous administration, that one of the tactics used has been to decimate agencies … both budgets and staffing, making it harder for them to implement their mission,” Cleetus said.

Congressional Republicans — who unanimously voted against the Inflation Reduction Act — are already making plans to beef up oversight of the Biden administration in anticipation that they’ll hold the gavels next year (E&E News PM, Oct. 6).

Bob Perciasepe, who served as EPA’s deputy administrator during the Obama administration, said increased oversight on Capitol Hill will “definitely be a challenge” for agencies working on the new climate and energy programs.

Implementing the law “will be able to happen,” he said, but it will involve a “diversion of resources” to answer the “billions of questions that come in on a daily basis.”