The climate thing Pruitt and Obama agree on 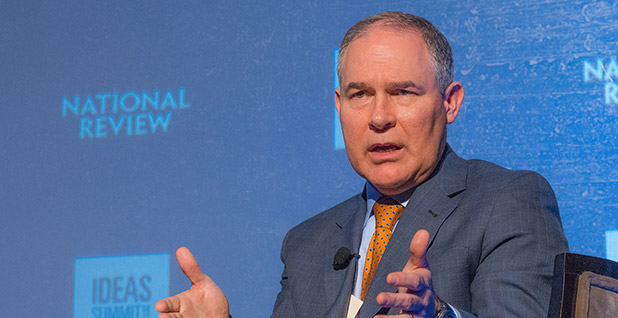 Scott Pruitt and President Obama don’t agree on much. But they’re like-minded in thinking that Congress — rather than U.S. EPA — should figure out how to deal with climate change.

On Monday, EPA boss Pruitt announced to a group of Kentucky coal miners that he’d be officially revoking Obama’s signature climate rule, the Clean Power Plan, which would limit power plants’ greenhouse gas emissions. Pruitt accused EPA of going too far with that regulation under Obama, saying it’s up to Congress to determine how emissions are tackled.

"It’s Congress that passes legislation that gives us direction, that gives us our orders as far as how we administer that statute; it gives us the parameters," Pruitt said. "The last administration just simply made it up. … They didn’t want to use fossil fuels, so they used authority to do otherwise, and that’s not consistent with the statute."

The Obama administration also wanted to defer to Congress when it came to tackling climate change.

Obama’s then-top climate official, Carol Browner, said in 2009, "The president continues to believe the best path forward is through legislation, rather than through sort of the weaving together the various authorities of the Clean Air Act."

Lisa Jackson, Obama’s first-term EPA boss, said in 2009 that she "firmly" believed, "and the president has said all along, that new legislation is the best way to deal with climate change pollution." She said she hoped Congress would make her agency’s job of writing greenhouse gas rules "obsolete."

But every congressional effort to pass a comprehensive climate bill fizzled, leaving those Obama rules — the ones they said they didn’t want to write — on the books, and now subject to rollbacks by the Trump administration. The Obama administration said it did the best job it could, given the problems with fitting an unconventional pollutant into the confines of a law that wasn’t written to deal with it.

Although he emphasized Congress’ authority, it’s unclear what exactly Pruitt would want lawmakers to do on the issue — if anything. Congress could simply wipe out EPA’s ability to regulate greenhouse gas emissions using the Clean Air Act. It could also set up a national program for ratcheting down greenhouse gas emissions or give EPA clear instructions about how to tackle them using the Clean Air Act.

But opening up the Clean Air Act has long been viewed as the third rail of environmental legislation, even when the political divisions on Capitol Hill were less stark than they are now. And it appears unlikely that Congress will go near this issue anytime soon.

Some of Pruitt’s critics question whether he wants congressional clarity on this issue at all.

"I think that this is sort of a talking point to reinforce his view that EPA exceeded its authority with the Clean Power Plan, and if there’s a need to deal with climate change, Congress should do it," said Bob Sussman, who was Jackson’s senior policy counsel at EPA. "But I don’t think he’s really asking Congress to do anything, which the Obama administration was."

Sussman added, "Since neither Pruitt nor Trump nor anybody else [in the administration] has shown any interest in addressing greenhouse gases and addressing climate change, I can’t imagine what he would want Congress to do."

But some conservatives see potential for the administration and Congress to tackle the issue — perhaps even in a bipartisan fashion.

"This administration has been not exactly predictable at all times," said Bob Meyers, an attorney at Crowell & Moring LLP. "I wouldn’t rule out some legislative effort at some point." Meyers led EPA’s air office during the George W. Bush administration and was a longtime House energy aide prior to that.

Since the Supreme Court’s 2007 decision in Massachusetts v. EPA, in which the justices said EPA has the authority to regulate greenhouse gases under the Clean Air Act, "we’ve had these square-peg-round-hole sort of discussions," Meyers said. "I think Congress could go in and say, ‘If you’re going to do that, here’s how you do it.’"

One option — one that would likely be supported by some conservatives — could be a new law saying EPA can’t regulate greenhouse gases.

"I think I could do that in one sentence," Meyers said, noting that opposition from the left would be fierce. "I don’t think they have the votes for that."

But if Congress does want to address climate change, it could come in the form of a new title to the Clean Air Act dealing specifically with greenhouse gases.

That would be a huge political feat. "It would require Congress to change the way it’s operated for the past couple of decades," he added. "If they want to commit two years and thousands of hours of staff and member time to it, I think they could do it, but that’s what it’s going to take."

Former Kentucky Republican Rep. Ed Whitfield, ex-chairman of the House Energy and Commerce Subcommittee on Energy, said Congress "really should have a say about CO2 and how it’s going to be regulated."

Even if the Trump administration reverses Obama’s climate policies, "the next administration can do the same thing," Whitfield said. "Congress should set a national policy of what are we going to do."

But the issue "really is contentious," said Whitfield, who’s now a partner at the Washington lobbying firm Farragut Partners. "Environmentalists are really well-organized, they’re really well-funded — Sierra Club and others, and there doesn’t seem to be the will in the Congress to have a discussion about the issue. … We shouldn’t be afraid to have a debate about it; we shouldn’t be afraid to have votes about it."

There have also been rumblings on Capitol Hill lately about a carbon tax.

Sen. Lindsey Graham (R-S.C.) has said he’s in talks with energy companies and Sen. Sheldon Whitehouse (D-R.I.) about a bill that would slap a "fee on the use of carbon" and generate "a lot of money" to fatten the depleted Highway Trust Fund and prop up a nuclear industry struggling to compete with cheap natural gas, low demand and subsidized renewables (E&E Daily, Sept. 27).

But fights among conservatives — as well as the broader partisan split — are expected to thwart any climate legislation.

"Congress is having trouble doing pretty much anything right now, and I don’t think that this is the Congress to take on the Clean Air Act either broadly or narrowly. I just don’t think they’re up to the job," said Sussman.

The alternative to legislation is the "executive and the courts," Meyers said. "And that’s where we’ve been for a long time."