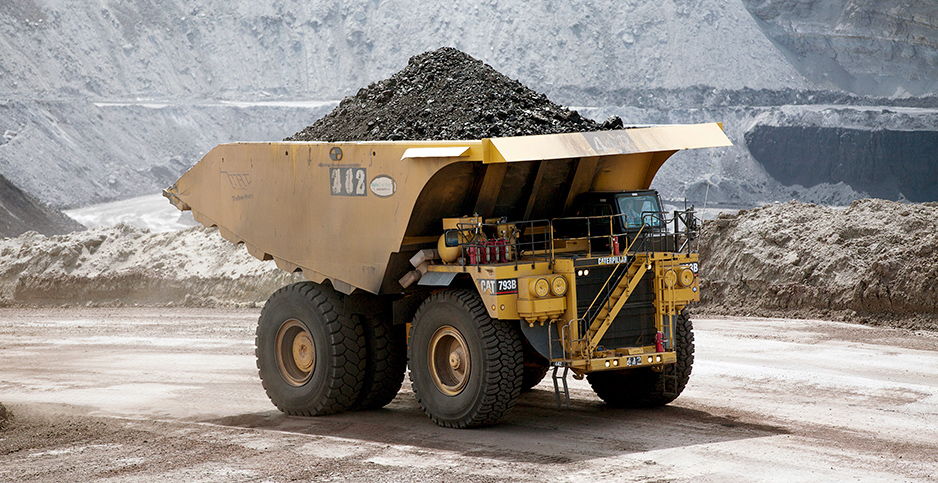 Coal being transported at the Eagle Butte mine in Wyoming. Kristina Barker/Reuters/Newscom

When the Belle Ayr mine opened just south of Gillette, Wyo., in 1972, it signaled the beginning of the American coal industry’s westward migration. This week, it became a symbol of coal’s decline.

Belle Ayr was the first strip mine opened in the Powder River Basin of Montana and Wyoming. It’s now in danger of becoming the first in the basin to close. Yesterday, the mine’s owner, Blackjewel LLC, was in federal bankruptcy court in West Virginia, frantically trying to obtain financing that would prevent the company’s collapse.

Across the country in Wyoming, chaos reigned. Blackjewel sent some 600 miners from Belle Ayr and the nearby Eagle Butte mine home Monday. Some miners complained of not being able to cash their paychecks. State officials rushed to both mines, now vacant, to identify potential safety hazards.

Over it all hung a question: Would America’s most productive coal mining basin ever be the same?

"To me, it’s a real sign there is something fundamentally wrong with the economics of PRB coal," said Clark Williams-Derry, an analyst who tracks the coal industry at the Sightline Institute, which advocates for a transition to clean energy. "The new normal is not stasis. It is contraction and disappointment."

It wasn’t always that way. In the 1970s, a newly strengthened Clean Air Act prompted a westward expansion of the U.S. coal industry. The coal found in the Powder River Basin of Montana and Wyoming does not pack as much energy as the varieties buried in Appalachia. But its low sulphur content made it popular with power companies searching for ways to comply with America’s new air quality laws.

Today, the Powder River Basin accounts for roughly 40% of U.S. coal output, by far the most of any basin. Yet production there has plunged, falling from 462 million tons in 2011 to 324 million tons last year, according to federal figures.

The decline has been driven by stiff competition from natural gas and renewable energy. Wind, in particular, has eroded the Powder River Basin’s market in the Great Plains, a major outlet for the basin’s coal.

"Wind power has caused a lot of these coal plants to be uneconomical and be shut down," said John Hanou, a coal consultant who produces an annual study on the Powder River Basin. "Then on top of that you have the cheap natural gas from fracking."

Still, the basin has managed to avoid some of the worst impacts of the coal industry’s decline. Unlike Appalachia, it has not seen mines closed or idled. In 2015 and 2016, Alpha Natural Resources, Arch Coal Inc. and Peabody Energy Corp., then three of the basin’s four largest producers, declared bankruptcy. Around 460 workers lost their jobs in a single day in 2016, as Arch and Peabody slashed their workforces and cut costs.

Mining nevertheless continued. And, importantly, the cause of those troubles could be traced elsewhere. The 2015 bankruptcies were prompted by coal companies’ spending binge on metallurgical mines, which produce coal for steel fabrication. Arch, Peabody and Alpha Natural Resources could not sustain the debt incurred from those purchases and were forced to declare bankruptcy as a result.

This year is different. All Powder River Basin coal is mined for electricity generation, and the vast majority of it is consumed domestically. The problem: U.S. power companies consumed 687 million tons of coal in 2018, the lowest amount since 1978.

The decline has prompted upheaval in a region that long prided itself on stability. Cloud Peak Energy Inc., which operates three mines in the region, declared bankruptcy in May (E&E News PM, May 10). Last month, Arch and Peabody announced plans to form a joint venture, effectively combining their mining operations in the Powder River Basin in an attempt to cut costs (Energywire, June 21).

Then came Blackjewel. The West Virginia-based firm boosted production at Belle Ayr and Eagle Butte last year. Court filings show the company ran up even more debt, including $156 million in trade debts. The company reported having $138,000 in its bank account, leaving it on the brink of a cash crisis (E&E News PM, July 1).

Blackjewel saw its initial proposal for a $20 million loan to see it through bankruptcy fall through Monday, prompting the company to scramble to find a new lender. In a court filing, the company said it secured funding from Jeff Hoops, Blackjewel’s CEO, and an unidentified third party. The company was pushing for an expedited hearing to have the plan approved.

"If a hearing on the revised proposal cannot be held today these Debtors expect to have no choice but to convert these cases to chapter 7," Blackjewel wrote in a filing to the U.S. Bankruptcy Court for the Southern District of West Virginia. "If that occurs, untold amounts of value of the Debtors’ assets and estates will be destroyed and more than 1,700 people will be out of work."

The outcome of the hearing was unclear last night.

Hoops, reached by phone yesterday, declined comment, saying, "I’ll be happy to talk after we get all our people to work."

Blackjewel is a relatively new player in Wyoming. It’s a subsidiary of Revelation Energy LLC and operates mines in Kentucky, Virginia and West Virginia, where it largely mines metallurgical coal.

In 2017, it purchased Belle Ayr and Eagle Butte from Contura Energy Inc., a company formed out of Alpha Natural Resources’ bankruptcy. The sale called for $50 million in deferred compensation and Blackjewel’s assumption of the mines’ reclamation liability, estimated around $200 million.

That agreement figures to be important today. Contura’s mining permit was never transferred to Blackjewel. Environmentalists raised objections over the transfer to Wyoming regulators, questioning Blackjewel’s ability to pay for reclamation costs.

Contura is holding bonds totaling $237 million to cover the reclamation costs of the two mines, according to filings with the Securities and Exchange Commission.

Contura, in a statement, called Blackjewel’s bankruptcy "a complex and still evolving situation" and said it was analyzing the impact on its business.

"Contura believes the best scenario for all would be for the owner of these assets to stabilize its finances quickly, allowing workers to return to their jobs and the mines to resume operation," the company said.

Keith Guille, a spokesman for the Wyoming Department of Environmental Quality, said state officials were on the lookout for spontaneous coal combustion, hazardous water discharges and any sloughing of the mine’s highwalls.

"The mines are closed, and there is not even a skeleton crew at the mines. They are empty," he said. "That raises a few concerns for our agency and others."

DEQ Director Todd Parfitt sought to reassure the public at a meeting yesterday that the state was ready in the event the mines close.

"I want to say with assurance we are fully bonded for both facilities, for both Belle Ayr and Eagle Butte," Parfitt said.

Blackjewel’s bankruptcy immediately rippled throughout Gillette, the community at the heart of Wyoming coal country. State officials reported running out of materials on unemployment assistance within 24 hours of the mines’ shutdown.

Wyoming Gov. Mark Gordon (R) was peppered with questions at a public meeting yesterday about how Blackjewel would be held accountable. Some said banks would not cash their paychecks and instead referred them to the sheriff’s office. Others asked whether the governor had spoken with Hoops, Blackjewel’s CEO, about his plans for the mines. Gordon said he had not.

Even if Blackjewel weathers the short-term storm, its long-term outlook in Wyoming is uncertain. That owes itself in large part to the type of mines it owns. Belle Ayr and Eagle Butte produce a low-quality variety of coal, the market for which has been hammered by coal plant closures.

"I can’t imagine anyone wanting to buy Belle Ayr or Cordero Rojo," said Hanou. "I think the pain has got to happen."

Williams-Derry of the Sightline Institute echoed that sentiment. While the closures of Belle Ayr, Eagle Butte and Cordero Rojo could help coal prices in the short term, any relief for mining companies would likely be temporary, he said. Higher coal prices would be a burden for power plants already being pushed by gas and renewables.

Ultimately, Williams-Derry said, the Powder River Basin faces a choice about how to confront coal’s decline.

"We can do this in a chaotic way, or we can plan for a reasonable, thoughtful contraction of the PRB coal industry in a way that actually protects workers, guarantees cleanup and preserves the counties’ tax base," he said. "If you don’t plan for transition in a way that protects workers and the environment, you’re going to get more Blackjewels."