The Electric Road Trip and CO2, by the numbers 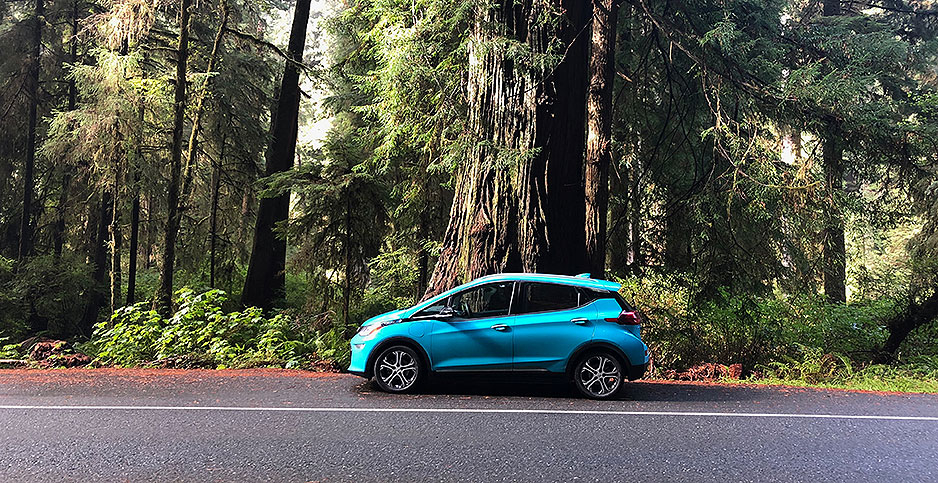 Those are the raw numbers from an E&E News road trip across 17 states this fall to explore electric vehicle adoption.

Global automakers are preparing to launch a wave of new EV models starting in 2020. With that, the electric car — and the future of transportation more broadly — is now at the center of debates about how to slash millions of metric tons of carbon dioxide emissions coming from tailpipes around the world.

The electric cars we drove were no more than a speck amid the gasoline-powered vehicles on the road last fall. But if the CO2 savings our cars recorded had been multiplied by 10 million EVs, for example, the carbon savings would have reached 32 million metric tons, a significant step toward the economywide reductions of greenhouse gases on which climate policy goals depend.

Electric cars could make a decisive contribution to the reduction of carbon emissions over the next few decades — as long as a Rubik’s Cube of consumer decisions, automakers’ output, policy choices, charging infrastructure and innovation all align, according to experts.

With the U.S. utility industry steadily migrating toward lower-carbon sources of electricity, cities and states are turning their attention to transportation emissions. They’re incentivizing electric buses and creating spaces for charging stations. And they’re looking to Silicon Valley and Detroit, in the hope that Tesla Inc. keeps building cars and General Motors Co. and Ford Motor Co. follow through on their plans to supercharge the market for EVs.

One of the underlying purposes of E&E News’ Electric Road Trip, a two-month tour of America in a series of electric cars, was to analyze the effect on emissions, especially in states where a significant portion of electricity is still sourced from coal.

Still, one simple, highly unscientific data point during the trip came down to our conversations with owners of electric cars.

We met EV converts like Sister Molly Thompson at the Sisters of Charity of Nazareth convent in Nazareth, Ky., who explained why, at 80 years of age, she jumps behind the wheel of one of the convent’s four Chevrolet Bolt EVs.

"Not putting pollution into the air. That’s one contribution I can make to saving the planet," Thompson said.

E&E News started its Electric Road Trip tour of America in September in Houston, where a complex of oil refineries light the sky. The trip cut up across the Midwest and on to Detroit, where U.S. automakers are reengineering factories. From there, our car hit the Great Plains and the Mountain States before splashing down along the West Coast.

E&E News ended its two-month reporting trip in Los Angeles in late October, as brush fires ravaged hillsides on the outskirts of the city.

Today, Californians continue to reel from the human toll, economic effect and ecological destruction of 2018, the deadliest wildfire year on record.

The signs of global warming were everywhere during the trip. But the transition to carbon-free forms of transportation remains bogged down by the sheer scale of change needed to get there.

Everywhere on the trip, E&E News reporters were surrounded by conventional passenger cars. New electric vehicle registrations climbed to about 200,000 last year, but that was a tiny fraction of the total U.S. fleet. Still, analysts say those EV numbers are expected to rise rapidly in the next five years.

The potential for carbon saving from driving an EV is clear, based on the states analyzed in the E&E News trip. The gasoline burned in an average passenger car making the same trip would have pumped out 6,548 pounds of CO2, according to EPA figures.

Our battery EVs burned no fuel, but the CO2 emissions from power plants that recharged our batteries had to be counted. That figure was 2,090 pounds of CO2 emissions, based on the average carbon emissions from power plants in each state that produced the electricity we used to recharge our vehicles, according to the U.S. Energy Information Administration. Our assumptions behind the comparison are here

On a carbon scorecard, the EV beat the gasoline-powered car by 68%, a total of 2.2 tons of reduced CO2 emissions for the 8,018-mile journey.

In scaling up the results from our trip, we chose a projection based on 10 million battery EVs, drawn from an estimate by the Edison Electric Institute and the Edison Foundation for battery EVs on U.S. highways in 2030. The figure is in the middle of the highest and lowest EV sales estimates by prominent industry and government analysts, explained Adam Cooper of the foundation and the institute’s Kellen Schefter.

Under this scenario, the 10 million battery EVs would be 9% of the roughly 112 million passenger cars and light-duty trucks on U.S. roads now; and using that ratio, the battery vehicles would have saved 32 million metric tons of CO2 emissions for the year.

How much does that matter in what is — at this point — a losing battle to slow the warming of the Earth’s temperature attributed to the blanketing impact of CO2 in the atmosphere?

Last month, the World Meteorological Organization reported record-high global concentrations of CO2 and other greenhouse gases, and the U.N. Environment Programme said there was "no sign" of emissions peaking soon. "The summary findings are bleak," the UNEP report said (Energywire, Nov. 26). Last month, negotiations to advance the Paris climate accord ended in stalemate.

Climate Tracker, a nonprofit scientific consortium, concludes that under current policy, the world is headed to an increase of nearly 3 degrees Celsius (5.4 degrees Fahrenheit) by century’s end, smothering hopes of limiting the worst impacts of climate change.

President Trump has directed that the United States pull out of the Paris Agreement, erasing the CO2 reduction goals pledged by former President Obama’s administration.

A one-year, 32-million-metric-ton CO2 savings from adding 10 million battery electric vehicles would help but would still leave a big gap. Electric cars would need to keep growing by millions of new sales every year.

A closer look at the challenge comes from a detailed analysis of California’s objectives for cutting CO2 emissions from its economy, published by the Energy Futures Initiative think tank (Energywire, April 10).

By 2030, California is aiming to produce 60% of its electricity demand from renewable energy, pull overall greenhouse gas emissions down 40% from 1990 levels and have 5 million emissions-free vehicles on the road.

To reach those targets, state CO2 emissions would have to drop by 258 million metric tons, EFI estimated. Motor vehicle and other transportation sectors could contribute 68 million metric tons, but the biggest contribution by far would come from aggressively increasing emission efficiency standards for gasoline engine vehicles, because so many would still be on the road in 2030, EFI’s California report concluded.

The Trump administration’s EPA and National Highway Traffic Safety Administration have proposed to freeze vehicle fuel efficiency standards at 2020 levels instead of phasing in more stringent requirements proposed by the Obama administration.

Alex Kizer, EFI director of strategic research, and EFI analyst Sam Savitz point to a long list of actions California will need to take to reach its carbon reduction goals, extending from vehicles to manufacturing, buildings and agriculture. That means lowering the carbon footprint of the power plants that restock EV batteries and taking advantage of lower-carbon electric power that can be available at night.

Texas provides a case study. E&E News traveled 736 miles in the Lone Star State in September using up 205 kilowatt-hours of electricity that had to be replaced. When we charged overnight, we took advantage of Texas’ wind, nuclear and other zero-carbon power. They accounted for 37% of generation at the 2 a.m. hour, on average in September.

It is a much different picture on days when we charged at the 6 p.m. hour that same month. With electricity demand high, power from gas turbines surged more than 400% and coal generation climbed 78%, according to Electric Reliability Council of Texas data. Production from Texas’ nation-leading wind farms fell.

The road trip also dramatized the impact on EV charging of reducing power plant carbon emissions. Recharging our EV in Kentucky, with its coal plants, poured out nine times more carbon emissions per kilowatt-hour of energy charged than in Washington state, with its abundant zero-carbon hydropower, according to EIA data.

EVs are definitely not the whole story for carbon reduction in the next decade, said Will Gorman, researcher with the University of California, Berkeley’s Energy and Resources Group. Their future is impossible to predict with certainty, given so many questions about technology, costs and how Americans will choose to travel in the future.

But to meet the climate challenge and get to zero-carbon emissions by 2050, EVs will have to be an ultimate choice. "I think EVs are of upmost importance," Gorman said.

There will need to be a lot more Sister Molly Thompsons.