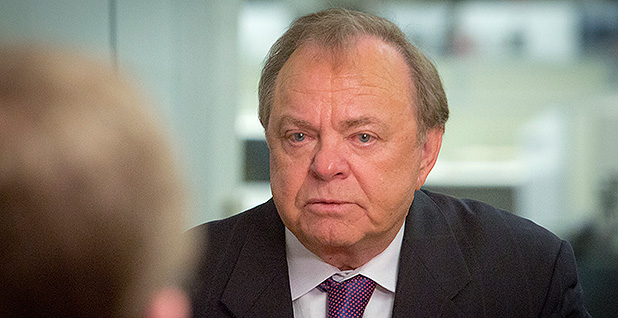 "He gives me credibility in the industry, for sure," Cramer told E&E News during an interview, noting that the oil executive recently helped arrange a fundraiser for him, featuring Hamm’s home state Sen. James Lankford (R-Okla.) and Larry Nichols, the founder of Devon Energy Corp.

Influential and willing to leverage his $18 billion wealth, Hamm has backed Cramer’s political career for years. To hear the congressman tell it, it was Hamm, founder and CEO of Continental Resources Inc. and a fracking industry pioneer, who drove him into the Senate race.

It took Hamm’s nudging and pledge of support.

"When Harold talked to my wife, Kris, and he said, ‘Kris, if Kevin does this, if you guys get into this, I will be his national finance chairman.’ That was pretty compelling," Cramer said.

While the third-term House member said Hamm’s backing was "very important" to his entering the Senate race, he said the oil executive has no day-to-day role in running his campaign. Cramer said they tend to talk every week or two, usually about fundraising.

Of Hamm’s donation, $5,000 went to Badlands PAC, a Cramer political action committee, as well as $33,900 to the National Republican Senatorial Committee, the main GOP campaign arm for the Senate.

The NRSC will back Cramer and attack Heitkamp as the campaign heats up, and Cramer’s campaign will likely get tacit credit for bringing in those funds.

In all, the joint fundraising committee has supplied $155,000 to Cramer’s campaign, more than $72,000 to the Badlands PAC, and almost $65,000 to the NRSC, according to the Center for Responsive Politics.

Hamm was said to be an influential energy adviser on Trump’s presidential campaign and was floated as a possible Energy secretary by Cramer. Both want to expand offshore oil and gas production, while cutting dependence on oil from the Middle East.

"He chewed me out pretty hard about it and wanted to know what I’d do about it," he said.

For all of Hamm’s support, Cramer’s energy contributions are dwarfed by those of Heitkamp, an outlier on energy and development matters in the Democratic Party.

Heitkamp bucked the party line in voting to confirm Pruitt and on various environmental regulations, including repealing the Interior Department’s Stream Protection Rule.

Heitkamp’s bank account dwarfs that of her rival, with $5.2 million in the bank on more than $9 million raised. Cramer has raised $2.4 million, with $1.9 million on hand.

Energy and natural resources is his top donor by economic sector, according to the Center for Responsive Politics, but at just $70,050, far below Heitkamp’s total take from related companies.

Cramer isn’t worried about the difference, noting that Heitkamp has had more than five years to "stockpile" funds for the race. The congressman said he has been strongly supported by the energy industry in his three most recent House races.

Cramer said the donation "erases the argument" by some on the left that he’s been "bought and paid for" by the Kochs. He’s quick to add, though, that he still appreciates the backing he’s getting from the conservative brothers.