The epic journey of a modest proposal 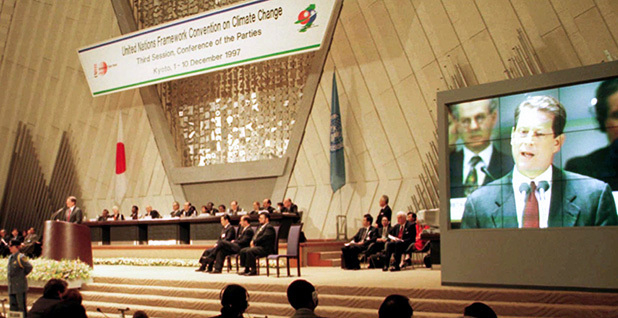 The United States and former Vice President Al Gore championed carbon markets at landmark 1997 U.N. negotiations in Kyoto, Japan. America swiftly dropped cap and trade as a solution to climate change, but the mechanism as taken on a life of its own in Europe, Brazil and now China. Photo courtesy of AP Images.

In 1968, John H. Dales, an obscure Canadian economics professor, came back from a sabbatical determined to end what he felt was an endless and meaningless drama between environmental groups and industry over the problem of pollution.

Industries fielded experts who would argue their emissions were necessary for jobs and profits. They reeled off statistics to prove they did little harm to the environment. That was the cue for environmental groups to react with outrage. Some, according to Dales, had become accustomed to simply accusing big business of being evil.

Dales, a man who loved tranquility and bird-watching, was tired of the posturing. After a year of mulling over the skirmish, he had produced a slim, 111-page book called "Pollution, Property & Prices."

It was the classic modest proposal from an academic. As Dales explained in the book’s opening pages, it would surely never appeal to the opposing sides in this fight. It contained "virtually no factual information and very little in the way of outraged denunciation of evil."

And yet Dales’ idea, popularly known as cap and trade, has spread around the globe over the last four decades. Thirty-five countries, 13 states and provinces, and seven cities are using it to fight greenhouse gas pollution that causes global warming. Lumped together, they represent almost 40 percent of the world’s gross domestic product. Recently, delegates at the U.N. conference on climate change in Paris declared that it is a strategy nations may use to carry out their new, more ambitious pledges to shield the world against the possibility of runaway global warming.

Next year, China, the world’s biggest source of man-made carbon dioxide and other climate-changing gases, is preparing to lead this parade by unveiling what may become the most far-reaching national CO2 reduction program of them all.

How did this happen? Dales, who died in 2007, was writing about air and water pollution, but he had only a vague notion about the causes of climate change. His book, published by the University of Toronto Press, went nowhere, according to Dales’ son, John Robert Dales, now an importer and wholesaler in Toronto.

"Father was a pure academic in the sense that he was never going to be promoting the idea," he said.

Environmental groups, with one glaring exception, rejected it, and some industries, particularly those that sell fossil fuel, still regard cap and trade as a peculiarly insidious form of a tax. The European Union initially opposed it. And support in the United States — once the most enthusiastic sponsor of the idea — later collapsed.

The traditional way to limit pollution has required a legal mandate to force companies to do it. This requires a democratic government strong enough to fend off lobbying and clever enough to come up with pollution abatement schemes that work in a wide spectrum of industries. The exception was China. Since 1953, it has governed through elaborate, top-down, five-year plans that sometimes required emitters to shut down their plants in midyear so their emissions would stay within the bounds of the plan by the year’s end.

The big difference in Dales’ plan was that it used a market-based concept. Under it, the government imposes a declining limit, or "cap," on a family of pollutants, tailored to a plant’s history of emissions. Then it leaves it up to the company to find ways to stay under the cap. Dales’ idea was to use market forces and private innovation, not government planners, to arrive at the cheapest and most effective way to do it.

The cap is implemented with allowances that amount to a government-issued permit to emit a given amount of a pollutant. At the end of a year, the company must come up with a permit for every ton of CO2 it emits. For example, Company X finds a promising new pollution abatement technology, buys it, implements it, reduces its emissions below its cap and then has unused permits it can sell to the market.

But Company Y decides to ignore the cap. At the end of the year, it needs to buy permits from the market in order to avoid a stiff fine for exceeding the cap. Rather than mandating a specific technology for each industry sector, the government need only distribute the allowances, develop accurate ways to measure pollution levels, and design and police markets to make sure they remain stable and fair. The market would do the rest, because rising prices for permits would stir technological innovations for curbing pollution.

Emissions trading sounds like a simple theory, and, in the beginning, it was.

How an economic approach replaced ‘sue the bastards’

Dales’ cap-and-trade approach was understood by only a few politicians and is still largely unknown to the general public, but it did generate some enthusiasm among young economists. Some business groups later grew to like it, but environmental groups largely rejected Dales’ notion that they could continue their ritual fight against big business by buying permits and then simply retiring them, which would tighten the cap.

"Both groups would, I think, learn something in the process," Dales asserted in his book.

For most of the traditional players, it was to be a slow learning curve, but the general idea about using markets did catch the eye of the Environmental Defense Fund, a relatively new, New York-based environmental group that had attracted bipartisan support to restrict the use of DDT and to get the lead out of gasoline.

Fred Krupp, who was hired to run EDF in October 1984, had become curious about using economic approaches to solve environmental problems in college. One of his professors at Yale once told him that if "people lowered their voices" on environmental problems, "these problems were solvable." But this position wasn’t shared by many of his colleagues in EDF’s hierarchy. They were lawyers, like Krupp.

"The original informal slogan of the older EDF members was ‘sue the bastards,’" he explained.

One of EDF’s major donors left after Krupp let it be known he wanted to try an economic approach to solving environmental disputes. That led to an early budget problem, forcing him to pick seven people out of his 47-member staff who would be laid off.

But by the spring of 1985, Krupp had accumulated enough money to hire another economist, a college professor and agriculture specialist named Dan Dudek. Dudek explained that Dales’ approach, then coming into vogue with younger academics, was still all theory.

Dudek’s dream was to put it into action.

The economist explained how emissions trading could attract the most efficient and innovative ideas to play on environmental disputes and not leave non-business experts in governments to pick more traditional, but usually also more expensive, approaches.

This was what Krupp had hoped to hear, but it seemed too easy. "I wasn’t sure if Dan was loony or the greatest visionary I had ever met, but I took a chance and hired him," Krupp later recalled.

Dudek went to work on how to apply cap and trade to air pollution problems and came up with a scheme to apply it to acid rain, a problem that had polarized Congress. More than 70 bills had been introduced to solve the problem, and passions over the issue had risen to the point where none of them had passed.

Then Krupp wrote an op-ed piece about the approach for The Wall Street Journal, which was spotted by C. Boyden Gray, the chief counsel for then-Vice President George H.W. Bush, who was running for president. Gray, who had heard about theories to use economic tools, wanted EDF to help him set up a cap-and-trade program on acid rain.

Acid rain was caused by sulfur dioxide emissions from coal-fired power plants that were devastating fish and trees in the lakes and forests of the Northeast and in Canada. Under Krupp, EDF was structured for a bipartisan approach to its lobbying. For example, its board included the wives of Republican Sen. John Heinz and Democratic Sen. Tim Wirth.

In the summer of ’88, after a board meeting in New York, Krupp, the senators and their wives, and a few others took a walk in Central Park, where their discussion gave shape to "Plan ’88," a three-page memo to the incoming president, whether he be Democrat or Republican, about emissions trading and how it might be applied to reduce acid rain. After Bush was elected, Gray, who headed Bush’s transition team, invited Krupp to the White House.

The elder Bush, Gray explained to Krupp, wanted something to support a campaign pledge that he would become the "environmental president." The plan that evolved was to frame emissions reduction in terms that businessmen understood.

This was not a green mandate. This was a strategy to help them be more competitive by using trading to find the cheapest ways to cut emissions.

Robert Stavins, a Harvard economist, was asked to join the team and help draft amendments to the Clean Air Act that Congress passed in 1990 with big majorities in both houses.

Industry welcomed the idea. Most environmental groups, unfamiliar with cap and trade, remained neutral about it. Barry Commoner, one of the founders of the modern environmental movement, called the EDF approach "cynical and gutless."

"As I recall it, EDF was all alone," said Stavins. The acid rain abatement program started in 1995, and using emissions trading, the U.S. power plant industry came up with new ways to blend different types of coal to cut acidic emissions. This avoided the government’s proposed solution, which was to force companies to buy expensive scrubbing technology.

The result was a 25 percent cut in the fossil fuel emissions that caused acid rain at a small fraction of the expected cost. The industry responded to the program with 100 percent compliance.

In 1997, the Clinton administration, after some internal fighting, blessed cap and trade and sent Vice President Al Gore to Japan to persuade nations to include the strategy in the Kyoto Protocol. Gore invited Dudek to be an adviser.

Green groups in Europe and most E.U. governments — who favored a carbon tax — fought it, but enough Asian nations and other, smaller U.N. members were intrigued enough by a fresh idea that they voted to include it in the first global pact to fight climate change.

Although they had introduced a remarkable change in what Dales had described as a traditional but often fruitless battle, Krupp and Dudek did not always agree on the best ways and places to promote it. As Krupp tells it, Dudek came to him one day after the acid rain program was launched and told him he wanted EDF to send him on an exploratory trip to promote cap and trade in China.

"I told him that’s the worst idea ever," Krupp recalled. China rejected market forces. "I didn’t think there was any way that Americans would be able to have any impact on a country as big as China."

Dudek held his ground, insisting that the mission to lobby China was the most important thing EDF could do.