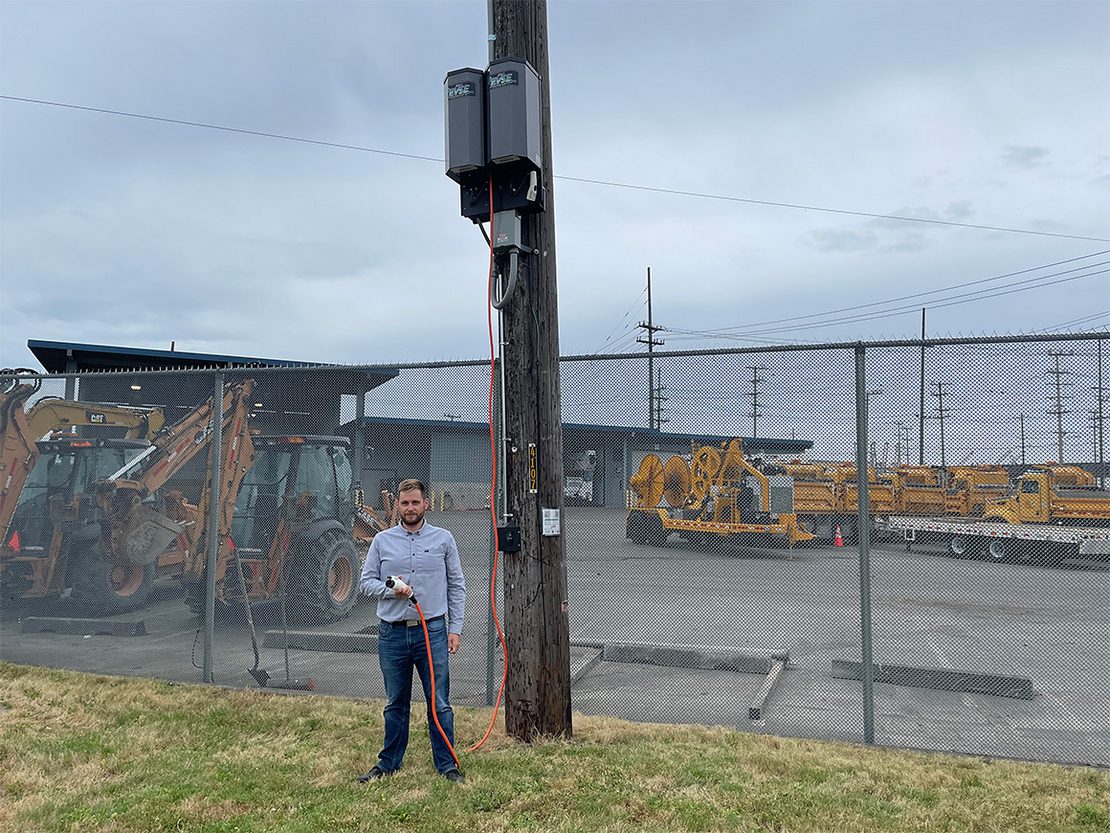 Jacob Orenberg stands next to a wooden utility pole on a cloudy Seattle afternoon, tapping at his phone. Then, with the faintest of whirs, something stirs overhead.

The noise comes from a gray steel box, a dozen feet off the ground and blandly unremarkable in the manner of hardware that hangs off power poles. A slender white-and-black thing is slowly descending from that box, attached to an orange tether. Reaching the level of Orenberg’s waist, it halts.

The device is a charger, the standard-issue kind that conveniently refills the battery of an electric car in a home garage.

This charger, however, is on a curb, in an industrial part of the city where anyone could park. It is a prototype of a system meant to be convenient for a different kind of person: someone who wants an electric vehicle but doesn’t have a garage.

How to charge the batteries of such peoples’ cars is one of the intractable riddles of the budding EV age.

Americans need to drive EVs by the millions if the United States is to drive down its carbon emissions and preserve the existing climate. According to data from the Department of Energy, about 37 percent of all households are garageless, leaving residents who live in apartments or homes reliant on the shared resource of curbs or parking lots.

Seattle is one of the first cities to try out this new approach: a retracting, on-demand charging station that perches on a power pole. While far from perfect, it evades some of the obstacles that stand between the curbside and the EV-curious.

“Frankly, there’s not a lot of other solutions we can find for a lot of residents in Seattle,” said Orenberg, who is a capital projects coordinator at Seattle City Light, the municipal electric utility. “This is conceivably the only solution that will work.”

Seattle is like many West Coast cities in its enthusiasm for electric vehicles. But it is also an older city.

Many houses don’t have garages, a legacy of the pre-car era. And like many American metros, it is in the midst of an apartment-building boom that has swelled its garageless population.

This combination — lots of EVs, few garages — creates a common but strange tableau in Seattle: the million-dollar home with a shiny Tesla on the curb, connected to each other via a power cord that snakes overhead through tree branches, or is thrown across the sidewalk with a rubberized cover to prevent trips and lawsuits.

Seattle’s new pilot program will place 30 chargers throughout the city, with a special focus on disadvantaged neighborhoods. The municipal utility is running the program with input from other city agencies, like the transportation department, which oversees curbs.

Most will be on wood poles, though some may reside on steel light poles or at regular height on curbside pedestals. Each charging nest could cost the city $11,000 to $25,000 to install, Orenberg said, depending on if it features one plug or two. The entire project, part of the city’s transportation electrification budget, could cost $900,000.

That is half of the solution, and perhaps the easy half.

The pole-mounted charger is of little use unless accompanied by a parking space specifically meant for EV charging, and that excludes other drivers. That is a fraught prospect.

“Street parking in Seattle is a rare commodity,” Orenberg said. He should know: Orenberg played a key role in an earlier, frustrating effort to build curbside chargers in Seattle (Energywire, Oct. 21, 2019).

This month, back at the power pole, the charger has not finished its journey. Orenberg grabs the charger and depresses a little tab on its top. The leash — which is also the power cable — resumes unspooling, at the same leisurely pace. Orenberg walks it over to the curb, where he bends over and jabs the charger in midair, as if plugging it into an invisible car.

The driver is oriented to this whole process by a sheet of paper nailed to the wood pole. It has brief instructions and a QR code. Scanning the code opens an app, which controls the charger and initiates payment, at a rate of 20 cents per kilowatt.

Done with his charging-session pantomime, Orenberg places the charger on the ground. Another few taps on his phone, and the cord winds in reverse, dragging the plug across the ground and back up the pole to its seat at the base of the steel box.

On the face of it, becoming part of Seattle’s program seems quite simple. Anyone who lives in a home without a dedicated garage, who has an EV or is soon to get one, can apply, according to the utility’s guidelines.

Officials will use a formula to make sure the chargers are spread throughout the city and are otherwise equitable. If it fits the requirements, mailers will be sent to the neighbors, asking them to comment. If less than half of the neighbors object, the installation can go forward.

A parking space, located near the applicant’s home and a suitable pole, would be painted (probably green) and signed for EV charging only. The applicant has no special access. Since the curb is a public amenity, he or she will vie for it with other EV-driving neighbors or visitors.

Parking in the space will be limited on weekdays to four hours, and loitering carries the penalty of a $124 parking ticket. Overnight park-and-charge is unlimited.

Conflict is inevitable, and not just because parking is fixed and EVs are multiplying. Filling a battery is not fast. This charger can deliver 9.6 kilowatts, which provides about 30 miles of range per hour. Given that fully recharging a typical EV battery can take eight or nine hours, a driver may not have the satisfaction of topping off before the ticket writers arrive.

Orenberg believes that, theoretically at least, everyone could get the charge they need. The average Seattle commute is 25 miles, and he surmises that one charger could support as many as 10 vehicles if everyone charges twice a week.

Early demand far outweighs the available slots. As of mid-July, Orenberg said, the city had received 1,148 applications for the initial 30 planned chargers.

Seattle won’t be the first place in the country to try these chargers-on-a-stick. Melrose, a suburb north of Boston, has already demonstrated both their possibilities and difficulties.

The project began two years ago, when Martha Grover, Melrose’s sustainability manager, got a call from National Grid, the electric utility that serves Melrose along with much of Massachusetts and four other states on the Eastern Seaboard. Grover didn’t need much persuading. National Grid said it would pay for the chargers and eventually give them to the city, and would cover the costs of networking software for five years.

The concept of the charger was intriguing.

The gadget is the creation of Control Module, a low-profile hardware and software company. It makes both the Seattle and Melrose devices. In 2010, well before EVs went mainstream, the company designed a charger with a cable that spools from and retracts into a steel housing. That differs from the standard design, which is to hang the cables on the outside.

The Northeastern winter was the mother of invention. “We’re up here in Connecticut, and the first thing that concerned everybody is that the cable would get snagged by a snowplow,” said Dean Spacht, the company’s vice president of sales.

The automatic unspooling and respooling of cable — carried out with a standard garage-door motor — soon led the company to realize that the hardware could be mounted out of the way, like on a garage ceiling or a utility pole.

Stowing the electronics at the height of two men confers another advantage: a deterrent to vandals. Charging stations, unlike gas stations, aren’t manned, and stations sometimes are defaced or have their cables cut. In Melrose, Grover said, one of its older, traditional chargers was disabled with a melted slice of American cheese.

For the utility, a benefit is cost. National Grid said that Melrose demonstrated that power pole chargers can be 30 to 40 percent cheaper to build, mainly because the source of energy — the electricity — is available right there, from the lines strung on the pole itself.

“You’re not having to rip up pavement or do any of that construction work,” said Julia Gold, a National Grid transportation analyst and strategist.

Finally, wooden poles in the city are nearly as common as street trees, and many are located right by the curb. The idea seemed like a slam-dunk.

The goal in Melrose was to install 30 charging stations such that any apartment dweller in Melrose — less than a third of the population —would find one within a 10-minute walk.

That would seem a reachable aim, in a suburb less than 5 square miles that is home to 29,000 souls. It didn’t turn out that way.

The process took two years. A lot of the work, Grover said, was finding the “good poles.” The wood poles are on practically every street in Melrose, but the more closely she looked, the rarer the good ones became.

Main Street, the artery through downtown, was out; its principal wiring is underground, and National Grid said the energy supply couldn’t come from there. Some streets were too narrow. Trash and fire trucks wouldn’t have room to maneuver around a plugged-in car. Some poles were too far from the curb.

Others were “stub poles” — dummy sticks that supported wires but carried no electric current.

A number of perfectly good poles were crossed out because street regulations made the accompanying parking space impossible. In Seattle, for example, the “EV charging only” spots must be 8 feet from driveways, 30 feet from intersections, and 15 feet from fire hydrants. “You realize,” Grover said, “there are lots of sections of the street where there is no parking.”

But the biggest pole problem? “It turns out there’s a lot of things attached to them,” Grover said.

Then there was the challenge of humans.

When Grover would propose a location, the request would go to the traffic commission, which would send notice to the neighbors, or “abutters,” as they are known in civic parlance. That community feedback put the kibosh on even some minor side streets, which in some neighborhoods were the last viable locations. “We heard from some residents they don’t want a filling station in front of their house,” Grover recalled. “They didn’t want cars at every hour of the day in front of their houses, charging.”

In the end, Grover was able to thread the needle on nine poles, which are home to a total of 15 charging plugs. She figures that about half of the city is within the 10-minute walking radius she sought.

She deems the program a success. The installations were finished in December, and the plugs have so far been used for almost 2,000 charging sessions, with more than a quarter of those sessions taking place this summer — a sign that use is accelerating.

Last year, the utility proposed to the state Department of Public Utilities to allow it to spend ratepayer money to build 200 more utility-pole chargers in 10 Massachusetts cities, especially in so-called environmental justice communities that suffer most from industrial pollution. The regulators’ decision could come at any time.

The Melrose experience shows that getting chargers hung above the street will be “something of a process,” in the words of Rishi Sondhi, a clean transportation manager at National Grid. But power companies don’t see a lot of other options for delivering electric fuel to the millions who rely on the curb.

“We hope,” said Orenberg of Seattle City Light, “that this is the thing that will push them toward buying an EV.”