The future of cars: EVs or oil? 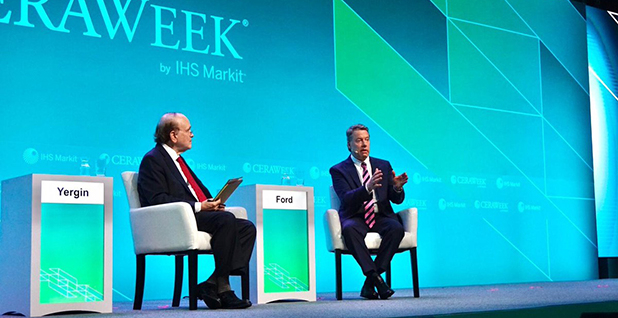 William Clay Ford Jr., Ford Motor’s executive chairman, set the tone during an oil-focused day at CERAWeek by IHS Markit, which this year reflects growing concerns about climate change and a realization that industry must work to reduce pollution even as consensus on the best path remains elusive.

Ford Motor, known a century ago as the company that pioneered the assembly line, is trying to find its way as mobility is again being rethought. That is why it’s working toward an electric version of the popular F-150 truck, investing in a scooter business and exploring cars that drive themselves.

"Really, every bit of our business is being disrupted," Ford said. "There’s tremendous opportunity in that, but there are obviously a lot of pitfalls, as well, potentially."

As Ford weighs the future of his company, the fate of automobiles has been a key point of discussion at CERAWeek on everything from electric fleets to the effects on oil demand. While excitement about EVs is evident, doubts remain.

On Monday, Fatih Birol, executive director of the International Energy Agency, offered a reminder that the majority of global oil consumption is tied to applications other than cars. He listed trucks, petrochemicals, aviation and shipping as helping to drive oil demand growth.

The CEO said that "at least for the next two generations of vehicles that the consumer’s going to own, they’re still going to remain within the liquid fuels market."

Chris Nordh, whose work at Ryder System Inc. involves advanced vehicle technology and energy products, said EVs have already gained public acceptance. Nordh recalled a past conversation about how a person pulling up in a Ferrari had "really made it."

‘Art, not a science’

Ford said he’d like for his company to be around another 100 years, adding that it was clear it had to branch off in new directions. But he stressed that Ford Motor’s current business helps fund work on possible change.

"If we don’t make great cars and trucks today that people want, guess what? There is no tomorrow," he said. "It’s an art, not a science, I think, trying to balance all of these things together, and yet we have to."

Ford Motor has shifted its tone on the rollback of some of President Obama’s most consequential climate rules.

Ford Motor CEO Jim Hackett, who took over after Fields retired in May 2017, signaled last fall that the company was changing its tune. "We’re in favor of keeping the standard, not a rollback," he told the Midwestern Governors Association (Greenwire, Sept. 21, 2018).

Yesterday, Ford said it’s clear there’s a real push for electrification in the industry. Autonomous driving also will see progress, he said, while allowing that the timing could be debated.

Paul Dabbar, undersecretary for science at the Department of Energy, told E&E News the agency is supporting research and development to advance EV technologies. That includes working to improve batteries and EV chargers. DOE also funds research on other vehicle technologies.

"We support R&D across the board, including in electric vehicles," Dabbar said.

Environmental Defense Fund President Fred Krupp said in an interview that the climate impact of electric vehicles — including cars, trucks and buses — could be a net plus "so long as the grid generating the electricity is cleaned up."

The results of a "science day" the group held to assess the potential greenhouse gas impacts of autonomous vehicles were less clear-cut. "I would say the jury’s out," said Krupp. The result "is going to be determined by policy," he said.

As policy, regulatory and market forces have pushed the vehicle market toward cleaner options, some parts of the auto industry are working to help the conventional internal-combustion engine compete by making it more efficient.

Ahmad al-Khowaiter, chief technology officer at Saudi Arabian Oil Co., said he sees a problem with people prematurely dismissing the internal-combustion engine as irrelevant even though it will continue to move a lot of people and goods for years to come.

"The challenge we face is when they say, ‘There’s no future, and therefore we shouldn’t be investing in it,’" al-Khowaiter said.

Michael Buhr, CEO of the vehicle fueling startup Filld, agreed. "There’s a view that the combustion engine isn’t going to be here in 10 years. And that’s a really big problem, because their view is something different from what reality is, and there needs to be some strong education around that."

But Bill Green, a chemical engineering professor at the Massachusetts Institute of Technology, warned that without other technologies, the internal-combustion engine faces "a scale problem" given a growing world population of drivers.

Projections suggest the total number of vehicle miles traveled worldwide could roughly double between now and 2050.

"So we really need significant improvement in the efficiency of the vehicles, just to tread water," Green said. "Of course if we get to 2050 and we’re still using as much petroleum as we are today, it’s going to stick out as a very obvious contributor to the CO2 problem."

Ford told Daniel Yergin, the vice chairman of IHS Markit, there will be a transition for some time in how people get around. That means cars with drivers as well as self-driving cars. And internal-combustion engines, hybrids, plug-in hybrids and pure electric cars. Over time, he said, the shift will be toward autonomy and electricity.

"There’s this race now to enable that freedom of mobility to happen again and to remove gridlock, to remove the pollution issue and make mobility be really fun and a convenient thing once again," Ford said.