The greenhouse gas Pruitt worries about 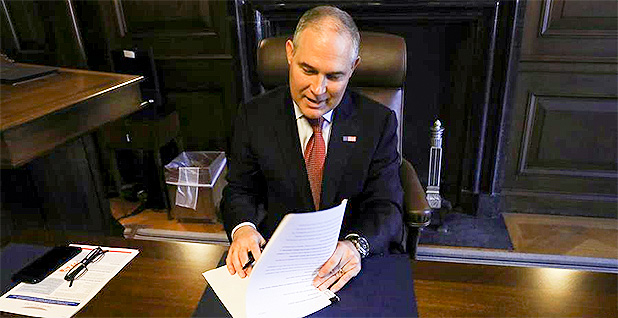 Scott Pruitt is one of the Trump administration’s most aggressive critics of climate change science, but lately he’s been talking about the dangers of greenhouse gas.

Like other conservatives in Washington, the EPA administrator has questioned basic climate science and said he plans to organize a debate on it this year, something many researchers fear will sow public confusion on an issue where there’s already scientific consensus. Pruitt acknowledges the Earth is warming but casts doubt on the exact extent of humanity’s influence. Shortly after being installed as the EPA administrator, he questioned whether humans are the primary drivers of climate change, rejecting the position of the vast majority of scientists.

But when it comes to methane, Pruitt has found common ground with climate scientists and environmentalists by calling the greenhouse gas a dangerous air pollutant.

It’s an unexpected position coming from the administration official who was a driving force behind President Trump’s decision to withdraw the United States from the Paris climate accord. It’s also one that straddles the interests of climate activists and the energy industry, which loses billions of dollars annually as a result of methane leaks.

During a December hearing in front of the House Energy and Commerce Committee, Pruitt told Rep. Scott Peters (D-Calif.) that he "absolutely" believed methane is a dangerous air pollutant.

"On March 9, you said that carbon dioxide is not a primary driver contributing to recent climate change and that, said differently, you said CO2 is not the only contributor to climate change," Peters said. He asked the EPA boss, "Do you agree that methane, nitrous oxide and other greenhouse gases are air pollutants?"

Pruitt’s response: "Absolutely, absolutely." He added, "And are more potent, actually, than CO2. Methane is more potent than CO2, as you know, in that regard."

Last week, Pruitt spoke about the dangers of methane as a driver of climate change again. Pruitt also told a group of environmental activists, known as Moms Clean Air Force, that he believed methane is contributing to global warming, according to a member of the group at the private meeting.

"He said, ‘Yes, methane is far more potent than carbon, and we haven’t done a good enough job on methane,’" she said.

Browning said she could understand why Pruitt was so opposed to imposing regulations on industry, but would cheer any sort of significant action on methane.

"I don’t care what the reason is; if he gets those leaks under control more quickly, I’m happy," she said.

Methane is a potent greenhouse gas, and scientists have determined that it is more dangerous when released into the atmosphere than carbon dioxide and is 25 times more potent during a 100-year period. It accounts for about 10 percent of humans’ greenhouse gas emissions, according to EPA, and a significant amount leaks from hydraulic fracturing wells, where it is also flared off during the process. Some of the methane emissions are also natural, and the agricultural industry is a growing source of emissions, according to EPA. While the energy industry has painted natural gas as a much cleaner alternative to oil and coal, environmentalists point to methane as potentially wiping out those gains.

The Trump administration has targeted President Obama’s attempts to regulate methane emissions. Since taking the helm of the agency, Pruitt attempted to suspend an Obama-era rule that would have restricted emissions on new oil and gas wells, although a court has blocked the suspension. Earlier this month, in the U.S. District Court for the Northern District of California, the Interior Department defended its decision to suspend key parts of the Bureau of Land Management’s methane rule for a year. Earlier this month, EPA backed off a proposal to stay Obama-era methane regulations for new and existing landfills.

An EPA spokeswoman declined to answer specific questions about why Pruitt was mentioning controlling methane emissions.

"Methane is very valuable," Pruitt said. "Companies don’t like to flare methane because it can be captured and used in other ways. It’s very marketable, if you will. So having a rule in place that incentivizes that and ensures that we approach it pursuant to the statute, I think, is something we should look at."

The energy industry supports regulating methane along with volatile organic compounds, as Pruitt has proposed, said Jack Gerard, CEO of the American Petroleum Institute. The industry opposed the Obama administration regulations but instead recently introduced a voluntary methane emissions reduction program, he said.

"Our counsel to this administration has been, ‘We support appropriate regulation; we believe as methane emissions are continuing to go down, even as our natural gas production and consumption continues to go up,’" Gerard told E&E News last week in an interview. "That’s a great success story. Why you’d want to go in and regulate something that’s going in the right direction is beyond us. So yes, we support the appropriate regulation of methane coupled with our voluntary program. We think he’ll continue to see that as it relates to methane."

Regulating methane can be a way to claim climate action even if Pruitt’s actions are motivated by a desire to help the industry’s bottom line, said John Walke, director of the Natural Resources Defense Council’s Clean Air Project.

"Methane is money; every time you lose methane, you’re losing product, and so the oil and gas industry has a built-in incentive," Walke said. "They’re not seeking no regulation; they’re seeking regulation they can live with, and Pruitt can accommodate them on that score and cast it as beneficial for the climate at the same time it is beneficial because he’s helping them save product."