The hydrogen-powered era is almost upon us. But is there a market? 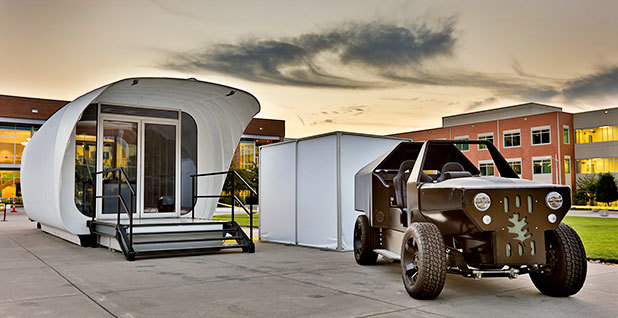 GOLDEN, Colo. — Two months ago, the Department of Energy trailered in a white, fish-shaped, 210-square-foot house and a dark jeeplike vehicle to put them on display here. The vehicle had an electric motor, a battery and a small gas-fired generator that could power the house, and the house had solar panels integrated into its rooftop that could power the car.

Arriving with the exhibit at the National Renewable Energy Laboratory (NREL) was David Danielson, an assistant secretary for DOE, who explained that the vehicle and the house were meant to stimulate thought among the agency’s network of 17 research laboratories and among its industry and university partners that are working on various projects to promote renewable energy, including the overhaul of the American power grid.

Danielson outlined various national challenges, beginning with the fact that the United States will have 33 percent more electricity users by 2050 and that it has pledged to cut greenhouse gas emissions 80 percent by then to limit the threats of global warming.

"What’s sitting here is one of our efforts to step up our game," Danielson explained, noting that both the house and the vehicle were made at Oak Ridge National Laboratory by a giant 3-D printer out of a carbon fiber-reinforced, plasticlike material.

The car-house combination was meant to exhibit and generate new solutions to various problems, including better home insulation and quicker, more energy-efficient manufacturing. But it was the symbolism of the connection between the two that seemed to arouse the most interest here. If there were a better way to create and store carbon-free fuels both for the transportation sector and for heating and powering America’s homes and buildings, then 75 percent of the nation’s clean energy problems might disappear.

In theory, there is. It’s hydrogen. And finding more efficient ways to use nature’s lightest element as an energy carrier has been part of NREL’s mission for decades. Scientists here sometimes describe their goal as energy’s "holy grail," and it has sent them down many blind alleys looking for ways to harness hydrogen’s reputed potential.

But now the hydrogen-powered era seems closer than just a concept. A mass hydrogen fuel market is beginning to form. NREL has its own fleet of fuel cell-powered cars, on loan from various manufacturers, mainly from Japan, Korea and Germany. They are silently prowling the roads on NREL’s campus. Lab researchers have built a model hydrogen gas station with dispensers that have the same look and feel as a gasoline pump to help future car owners handle the divorce from gasoline to hydrogen that fuel cell cars can turn into electricity.

Danielson was here to prod them to do more. He called clean energy a "multitrillion-dollar opportunity for American businesses and innovators." As the researchers milled around the odd-looking car and house, he told them they were made in hours, not months, by a massive new 3-D printing machine called BAAM, for Big Area Additive Manufacturing. BAAM may soon be applied to more challenges, including moving it to wind farms where it could print out longer, more productive wind turbine blades that currently can’t be trucked to the sites.

"You have to learn a lot of new things. Doing this will change the way people think about making things, how buildings interact with vehicles and how you can manage energy at a site," he told them. Then there is the matter of creating more high-technology American jobs. "Someone has to do these things first," he concluded.

‘We have to change a trillion-dollar infrastructure’

There are three major ways to produce hydrogen. One way is to use steam to split hydrogen out of natural gas or to extract it from coal. That’s the way most industries get it today, but the process requires fossil fuels, so NREL’s focus has been on the other two. Using electricity generated from solar panels or wind turbines to power an electrolyzer that can split hydrogen from water is one method under serious study. Using genetically altered bacteria to extract hydrogen from the sugar in farm wastes is another.

The big problem is that the earlier methods of using renewable fuels to split water were inefficient and much too expensive. The first major breakthrough here came in 1998 when John Turner, an electrochemist, showed that by using ultra-efficient solar cells from space satellites and combining them with an electrolyzer into a single device, he raised the efficiency level of producing hydrogen to 12.4 percent, a world record that stood for 15 years.

A year later, he wrote a still-famous paper, "A Realizable Renewable Energy Future," that predicted how hydrogen derived from solar power could help create an advanced electrical grid to move large quantities of clean energy over long distances without the need for large, centralized power plants.

Younger scientists are still tweaking the process Turner invented, and this year, its efficiency rose to 16 percent. They say commercial viability may come if it can hit 20 percent by the end of the decade. That would be their holy grail.

"Turner is an eminence in this. He’s the god we bow down to," explained one researcher. But the short shelf life and high expense of materials needed to split hydrogen from water with sunlight are still bars to competing with fossil fuels.

Turner, now 68, admits that pushing down the costs of the process to compete with the fossil fuel industries has been frustrating.

Roller-coaster politics has been another of his challenges. In 1980, President Reagan showed his contempt for renewable energy by ordering that solar panels be removed from the White House and then proposing that NREL’s budget be cut to zero. Congress managed to restore part of the budget, but NREL lost a third of its researchers and a lot of its momentum in the process.

After 2002, the politics changed. President George W. Bush launched a $1.2 billion program to develop a U.S. fuel cell car development program. In his 2003 State of the Union speech, he said his hope was that a person born that year would have a fuel cell vehicle as his or her first car. The speech got competitive juices flowing in automobile companies around the world.

Turner is quick to make the calculations: Someone born in 2003 would get a driver’s license in 2019. Fuel cell cars began arriving in the United States from Asia in 2015.

"They beat his deadline by four years," he said.

The challenges of commercialization

Fuel cell cars have tanks containing hydrogen, and their engines create electricity by combining the hydrogen with oxygen from the air. The resulting exhaust is not atmosphere-warming CO2, but simply water. Turner’s dream is that the owners of fuel cell cars now beginning to appear on U.S. streets and climate-conscious state and federal regulators will create a market for solar-produced hydrogen that will eventually make it competitive with gasoline.

The scientist dismisses concerns some people have that hydrogen fuel, clean or not, will bring its own problems into the market. U.S. industries, he points out, have produced and stored large quantities of hydrogen for years to supply oil refineries, which use it to make gasoline, and chemical companies that transform it into ammonia, which is needed for fertilizer.

The Obama administration later cut part of the budget for fuel cell development and had its own ideas about producing hydrogen, backing a program to experiment with bacteria that produce quantities of hydrogen when they’re eating. That program is underway here, as well.

Since 2008, Pin-Ching Maness, a group leader at NREL, has been looking into a widespread family of microbes called cyanobacteria, which are helped by sunlight to split water. One of the byproducts is hydrogen. Their problem, she discovered, was that they produced too much oxygen that inhibited efforts to scale up the hydrogen. NREL altered the project this year to focus on another pathway, which uses a strain of bacteria that can work with less oxygen.

Now she’s using genetic engineering to develop more vigorous microbes with powerful enzymes to break down carbon-containing wastes. Her current batch of microbes seem to thrive on leftover wastes bought from a local brewery and give off a family of useful products including hydrogen, ethanol and acetate, all of which have industrial markets. It’s a concept DOE likes to call a "biorefinery."

Commercially, though, the biorefinery seems far away. Right now, she explained, using the hydrogen it produces, it would cost $42 to generate the equivalent energy in a gallon of gasoline, which costs about $2.20. Breeding new bugs that can compete with pump prices is her goal. "That’s the holy grail," she said.

The quest goes on around the world. Germany is already experimenting with hydrogen produced from renewable fuel, blending it with natural gas in power plants to create cleaner electricity on cloudy or windless days. China has an interest in hydrogen and is building long power lines to move large amounts of electricity made from wind power in the west to help clean the air around its sprawling population centers in the east.

Vince Sprenkle, a chief engineer at DOE’s Pacific Northwest National Laboratory, thinks of hydrogen when he sees the Northwest’s rivers and streams brimming with spring water flows that move through the dams in the spring. "If I could take that electricity and turn it into an energy product and use it three months later in the middle of the summer, that’s where I see hydrogen coming in," he said.

Danielson, who has since left DOE after four years of trying to push it further and faster into clean energy, believes projects like the updated American power grid will carry on, regardless of what political party moves into the White House next.

It offers an opportunity for the United States to reassert its competitiveness in manufacturing more broadly and to create more jobs, he explained in an interview, noting that U.S. research has often spawned innovation but the nation has lost high-technology jobs to overseas manufacturers over the last four decades. He thinks lower U.S. wages now offer an opportunity to get some back.

"You can’t just invent it here and make it there. There is a connection between clean energy and manufacturing," Danielson said. "If you lose the connection between the laboratory bench and the factory floor, then you won’t be competitive from an innovation perspective."