The inside ethics advice for air chief 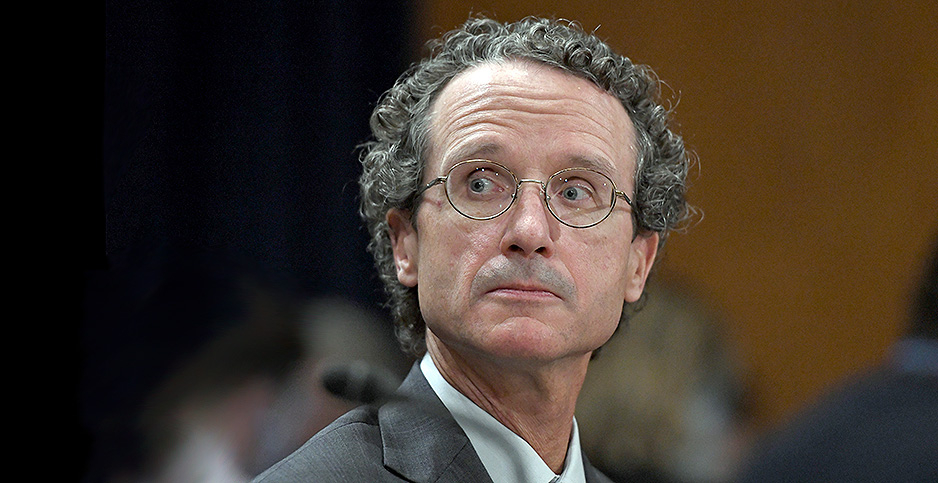 Records obtained by E&E News under the Freedom of Information Act shed some light on the ethics considerations behind Wehrum’s dealings with companies and trade groups with interests regulated by EPA as well as the 10-month process to have him sign a recusal statement.

Sworn in at EPA in November 2017, the agency’s ethics officials soon began to work on drafting such a statement for Wehrum that would list his potential conflicts of interests with the multitude of clients he represented in private practice.

"We will also need to start working on his recusal statement," said Justina Fugh, EPA’s senior counsel for ethics, in an email the day after Wehrum was sworn in.

About a week later, Wehrum was sent a recusal statement and asked to meet to discuss its terms. More drafts would follow.

In March last year, Josh Lewis, chief of staff for EPA’s air office, sent Wehrum a recusal statement dated that month. "Bill, Attached is the latest draft of your recusal," he said in an email.

Months later in July, she emailed Wehrum a revised recusal dated that month. "Hi Bill, Attached is a draft recusal statement to be sent by you to the Acting Administrator," Fugh said, referring to Andrew Wheeler, who has now been confirmed as head of EPA.

Those efforts to have Wehrum sign a recusal statement were not successful. The next month in August, The New York Times reported the head of EPA’s air office was declining to sign such a document.

"I have gotten three different interpretations, and what I don’t want to do is sign a recusal letter and then have the rules change again," he told the newspaper.

Wehrum, however, did sign a recusal statement the following month.

Emails show Wehrum was still searching for something to sign that night. "I have not received a draft. Is there someone I should contact?" he said in one message.

Other top EPA officials, who like Wehrum had been involved in litigation against the agency or had clients overseen by its regulations, moved much quicker on their recusal statements.

Former EPA Administrator Scott Pruitt signed his recusal more than two months after being sworn in. Wheeler signed his statement the month following his confirmation as deputy administrator.

Asked about Wehrum’s multiple recusal statements, EPA spokesman James Hewitt said, "Mr. Wehrum previously shared he was concerned by the lack of clarity surrounding the different recusal letters. He has since signed a recusal letter."

Wehrum spent six years in EPA’s Office of Air and Radiation under President George W. Bush. After leaving in 2007, he built a lucrative law practice representing businesses and trade groups.

In a financial disclosure report signed by him before President Trump nominated him in September 2017 to head the agency air office, Wehrum said he received compensation for legal services from nearly 20 corporations and business associations.

Soon after, he won Senate confirmation for the post two months later, some were knocking on his door.

"AFPM would like to schedule a meeting with you and your team to discuss state ZEV mandates," Moskowitz continued, using an acronym for "zero emission vehicles." "Would you please reply to this email with some times that work for you and your team?"

Not long before, Hilary Moffett, then the head of federal relations for the American Petroleum Institute, had also come calling, saying in an email to another EPA staffer that a group of people from some of the organization’s member companies wanted a meeting with Wehrum "to discuss priorities."

Wehrum’s calendar for those months, previously provided to E&E News in response to a separate FOIA request, does not reflect meetings with either trade group. AFPM and API are listed as former clients of Wehrum’s on his recusal statement.

An AFPM spokeswoman told E&E News that the meeting did not take place.

Asked about its meeting request, API said, "API regularly engages with officials at all levels of the administration on public policies that will strengthen our country, and benefit all American workers, consumers, and the environment."

Hewitt said, "As you know, Mr. Wehrum’s calendar is made publicly available online."

Emails show Wehrum was advised to stay clear of his former law firm and clients and also how his ethics considerations created considerable workload at the agency.

He forwarded on all kinds of meeting requests and invitations to ethics officials, including one to the National Association of Manufacturers’ holiday party. One invitation asking Wehrum to speak at the American Coke and Coal Chemicals Institute fall meeting last year sparked much discussion.

"Bill should remember not to engage in any ‘side bar’ discussions with Hunton on any particular matters that involve the firm or their clients," said one EPA staffer in an email about the meeting.

EPA officials were aware of Wehrum’s industry ties and sometimes tried to have others at the agency respond. After the Truck Trailer Manufacturers Association Inc. requested a meeting, it was discovered that Wehrum and his senior counsel David Harlow’s old law firm were part of a court case that involved the group.

"Bill/David can’t take the meeting," Lewis said in an email. "Our plan is to respond to the attached and let them know Mandy/Clint are available for the meeting."

Records show that EPA last year sought to emphasize ethics when scheduling meetings for its top political appointees. More ethics training was offered as well as guidance in how to vet agency meetings.

In one communication entitled "Embedding Ethics into Your Calendaring Process," Minoli, who has since left the agency to practice private law, said ethics officials hoped to help prevent conflicts of interests by including ethics review when scheduling principals.

"The best way to help you identify and resolve ethics issues with your calendars is to work more closely with your ethics officials," Minoli wrote, encouraging officials "to embed ethics in the vetting process of your calendar," such as screening for obligations under one’s recusal statement.

Hewitt with EPA noted, "This email was addressed to all EPA principals and wasn’t specific to any individual employee."

Wehrum’s meetings inside and out of EPA have attracted scrutiny from Capitol Hill. Congressional Democrats have homed in on Wehrum’s activities of interest to two Hunton clients: DTE Energy Co., a Detroit-based utility, and the Utility Air Regulatory Group, a trade organization that regularly challenges air pollution regulations.

His calendars show that in December 2017, Wehrum gave a speech at his former law firm that included UARG in the audience. DTE is a former member of the group. Wehrum addressed regulations affecting power plants and other sources of air pollution, according to the records (Greenwire, June 13, 2018).

Sens. Whitehouse and Tom Carper (D-Del.) as well as Rep. Frank Pallone (D-N.J.) asked the EPA Office of Inspector General to investigate whether Wehrum and Harlow broke federal ethics law by getting involved in a regulatory policy shift important to DTE. During the Obama administration, the utility had spent years battling EPA in court over whether a power plant overhaul qualified as a "major modification" that required a preconstruction permit under EPA’s New Source Review program.

After the company twice lost before the 6th U.S. Circuit Court of Appeals, then-EPA Administrator Scott Pruitt highlighted the litigation in a December 2017 memo announcing the agency would no longer challenge companies’ forecasts of the emissions increases expected from plant upgrades or other projects. That issue had been at the crux of DTE’s legal challenge.

Both Wehrum and Harlow were sent a version of the memo shortly before it was released, according to emails cited in Whitehouse’s request, although another EPA appointee said she had redacted potentially offending language "given your recusal issues."

In a February interview with The Washington Post, Wehrum acknowledged discussing the memo with colleagues before its release but said his involvement had been limited to a discussion of a 2002 set of air rules dating back to his prior stint at the air office under Bush.

"Since Bill Wehrum and David Harlow started at EPA, they have both been recused from all particular matters where DTE is a party," Hewitt said.

Hunton is also home base for UARG, a former Wehrum client.

Earlier this month, Rep. Pallone asked Hunton for all communications between firm members and Wehrum, Harlow and 20 other past and present EPA employees. Alongside concerns that Wehrum and Harlow, his former firm partner now at EPA, "may have violated federal ethics rules by helping reverse EPA’s position" in the DTE litigation, Pallone wrote that the air office appeared to have an agenda "remarkably similar" to that of UARG.

In separate requests, Pallone also sought records from DTE and seven other power producers, setting in all cases an April 25 deadline for responses. A committee spokeswoman told E&E News that the panel has received initial responses from all those who received a letter as part of its UARG investigation.

DTE, citing a planned shift away from coal-fired generation, recently dropped out of UARG but continues to use Hunton for representation in "a number of legal matters," according to a spokesman.

Wehrum received ethics advice on giving speeches to former employers and clients. On the day before he left the federal government, Minoli sent an email sharing direction from the Office of Government Ethics with the air chief.

"This memo gives an appointee some additional ability to make such speeches and presentations, but also establishes an absolute prohibition on such speeches or presentations when the event would have a ‘demonstrable financial effect on the former employer or client,’" Minoli said.

OGE guidance states government employees are barred from giving speeches to organizations that may help develop their business "such as a seminar for current or prospective clients."