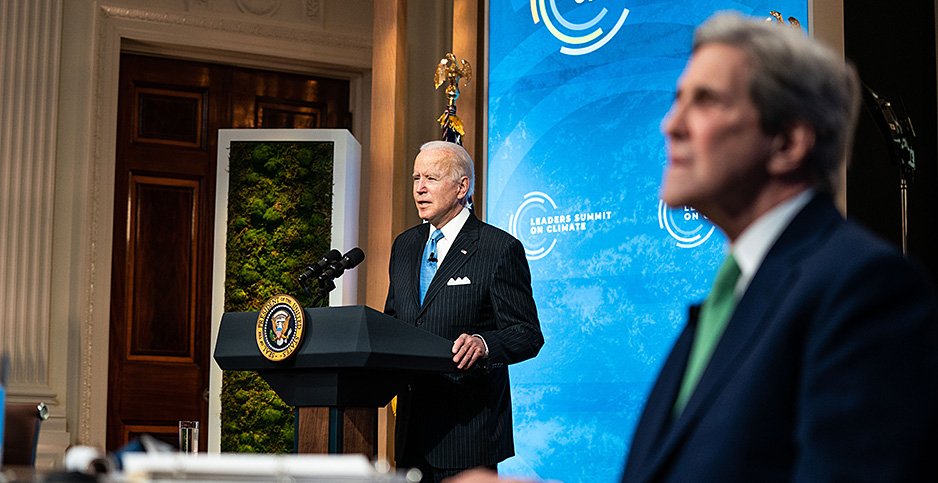 President Biden participates in the second day of his global climate summit at the White House. Sipa USA/Newscom

President Biden tried to convince world leaders today that addressing climate change could yield a jobs boom for their countries.

The second day of Biden’s climate summit began focused on solutions to climate change, as the president and world and industry leaders called for a massive, global technological shift in the years ahead.

The day featured world leaders, the heads of technology companies and labor unions. Biden said that all were ready to create the economy of the future, which won’t be so dependent on fossil fuels.

"One thing everybody talked about today is, is there anything else you can think of that could create as many good jobs going into the middle of the 21st century?" Biden said. "I mean, think about it, what else could there be that could have the opportunity to create so many jobs while doing so much good?"

Energy Secretary Jennifer Granholm said the administration will provide $100 million to energy communities in the United States affected by the transition to a carbon-free economy. She said the United States will work to cut solar and battery cell prices in half in the next decade. In addition, she said, the goal is to drive down by 80% the cost of hydrogen energy, which can be used as a natural gas replacement.

The United States also pledged to join with other countries to cut transportation and shipping emissions and to join a coalition of governments — representing more than half of new vehicle sales worldwide — that will work to accelerate the use of zero-emission vehicles globally.

"Pursuing a net-zero goal is not a zero-sum game," Transportation Secretary Pete Buttigieg said. "We all benefit if we succeed at this. If the pandemic has taught us anything, it’s how interconnected we are and how capable we are of change."

Several other countries also announced plans to cut emissions or to adapt to the worst effects of climate change.

Israeli Prime Minister Benjamin Netanyahu said his country would be entirely free of coal power by 2025.

Danish Prime Minister Mette Frederiksen said her country offers an example of how to better integrate clean energy into an economy while moving rapidly away from fossil fuels. She said Denmark now has more jobs in green energy than in fossil fuels, and that the private sector is on board.

The Danes have a goal of cutting emissions 70% by 2030. Key to accomplishing that is a $34 billion "energy island" in the North Sea that will provide enough clean power for millions of homes.

"Imagine that you are flying across the North Sea, hundreds of wind turbines appear on the horizon," Frederiksen said. "As you get closer, you spot an island, an island creating clean electricity, clean fuels, green innovation for millions of European households."

Fatih Birol, executive director of the International Energy Agency, brought a dose of reality to the summit, noting that coal usage is ramping up as the world emerges from the COVID-19 pandemic. He said that the promises of the conference need to match the data that shows the world’s consumption of fossil fuels has not slowed.

"I will be blunt: Commitments alone are not enough," Birol said. "We need real change in the real world right now. The data does not match the rhetoric, and the gap is getting wider and wider."

Two of the wealthiest Americans spoke on the second day of the conference to note that private industry should be brought into the climate fight, as well as local and state governments.

Former New York City Mayor Michael Bloomberg said incentivizing cities and businesses will be essential to mitigation efforts because they are the "key to defeating climate change." That includes funding to boost programs and tax incentives that cut carbon emissions as well as getting better climate information to them.

"They are responsible for the vast majority of emissions, so helping them and incentivizing them to take action really is critical," Bloomberg said, adding: "We can’t beat climate change without a historic amount of new investment, and that will only happen if governments, investors and business leaders have the information they need to make smart decisions working with partners."