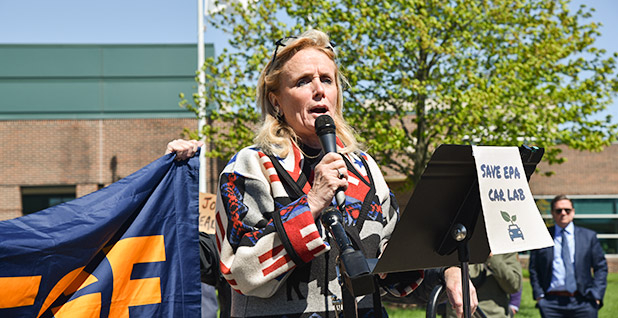 ANN ARBOR, Mich. — Dozens of new cars and trucks go into surgery each day on the quiet green campus here in the heart of auto country. Engineers expose their guts, hook them up to big computers with wires and tubes, and pretend to drive them on massive treadmills in an effort to ensure new vehicles don’t emit harmful pollution.

U.S. EPA’s National Vehicle and Fuel Emissions Laboratory is little known but envied around the world as the gold standard for crafting and policing environmental rules for vehicles. Now, the Trump administration’s charge against its predecessor’s climate change initiatives has put a target on its back.

The jobs of nearly half of the 436 scientists and engineers working here could be on the chopping block under President Trump’s budget plan. But so far, only a handful of advocates have lined up to fight for the lab’s future.

At stake are not only greenhouse gas emissions standards for cars, the government’s most significant remaining effort to curb global warming, but also one of the most successful pollution reduction programs in the world, and the expertise of hundreds of technicians who have prodded manufacturers to develop innovative technology.

"It has done more to reduce emissions and air pollution than any other facility in the country," said Margo Oge, who led the Office of Transportation and Air Quality from 1994 to 2012. "I can’t think of a group that doesn’t stand to benefit from it, aside from the oil industry."

On Tuesday, a handful of lab employees paused that work. They strode out past the security guards and the 10-foot-tall fences built to withstand a terrorist attack and grabbed signs saying, "Don’t punish the public, fund EPA."

"We want to do our jobs, but it’s so uncertain and hard," said an EPA employee focused on greenhouse gas regulations who did not want to be identified before scurrying back into the facility. "We didn’t know last week if we were going to come into work today. We’re not getting the support or direction we need."

The Alliance of Automobile Manufacturers has said it opposes delays in certification, but manufacturers have otherwise stayed quiet. That’s likely because the Trump administration’s plan also calls for a doubling of their $20 million in annual fees to help shore up the federal cuts. Some believe automakers are wary about publicly embracing the lab for fear they will then be pressured to pay for it.

The lab is fully funded for the rest of the year. But a leaked draft EPA spending plan for next year proposed cutting federal funding for the lab’s operations by 99 percent and making automakers pay for the approximately $48 million shortfall with increased fees as part of a strategy to meet the White House’s proposed 31 percent budget cut (Climatewire, April 5).

"We’re going to get the awareness out, but it’s got to happen pretty quickly," said Mark Coryell, the president of the American Federation of Government Employees Local 3907, which represents staff at the lab. "A lot of Americans don’t realize what they lose when they go at the budget with an ax and not a surgical knife."

The entirety of the lab’s climate work is slated for elimination. Proposed budget cuts to the climate protection program, an umbrella initiative to curb global warming at the agency, would slash 33 full-time positions at the lab.

"This is not just the lab," said Chet France, the former director of assessment and standards at the Office of Transportation and Air Quality and now a consultant for the Environmental Defense Fund. "This is in the broader context of policies the administration is pursuing, eliminating climate efforts, and it’s damaging the capability of the lab."

The lab’s focus on climate change has expanded in recent years as it has set increasingly stringent greenhouse gas emissions requirements for cars and heavy-duty trucks (Greenwire, June 2, 2015).

Dismantling the lab’s climate work could get messy, said France, because it is "integrated" into the lab’s larger mission. Scientists have long measured CO2 as another tailpipe pollutant.

One of the group’s favorite tales harks back to the late 1990s. EPA was setting new emission requirements for trucks, but domestic car companies were telling officials in private meetings they were not technically feasible. So Bob Perciasepe, the assistant administrator at the time, told lab engineers to retrofit a Chevrolet Silverado so it could meet the proposed standard.

"It was one of my proudest ‘mom’ moments at the agency," said Gay MacGregor, a former senior policy adviser at EPA’s transportation office who retired early after the election in order to defend the lab. Now helping to lead the campaign to save it, MacGregor distributed self-funded fact sheets at the rally.

"I always hoped to get a job with the EPA," said the incoming public health master’s student. "Now that might not happen."