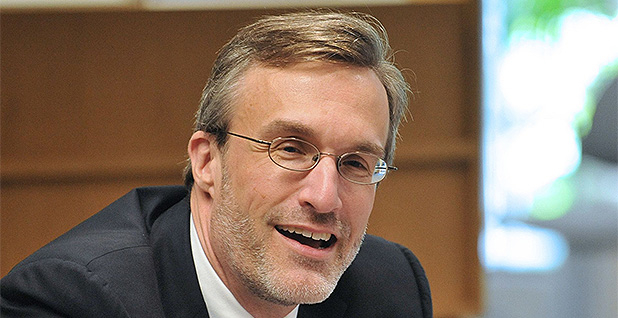 The study and process of promulgating federal regulations is often considered dry, dull and boring. So much so that insiders joke administrative procedure can induce an ailment called "MEGO" — or "My Eyes Glaze Over."

Cary Coglianese, an administrative and environmental law expert who directs the University of Pennsylvania Program on Regulation, could not disagree more.

"It’s where academic debates come to life and [problems] have to be solved and settled by making actual tough decisions."

Coglianese is the new chairman of a committee within the Administrative Conference of the United States, an independent federal agency that has mostly flown under the radar since its creation in 1968 (E&E Daily, March 24).

But President Trump’s deregulatory agenda could renew national attention on the body tasked with researching and recommending procedural policy changes to Congress.

Republican lawmakers have made regulatory policy a top priority this session and are pushing a number of measures that would change the way agencies issue rules, including the "Regulations by the Executive in Need of Scrutiny (REINS) Act" and the "Regulatory Accountability Act" (E&E Daily, Feb. 8).

Coglianese, chairman of ACUS’s rulemaking committee, said that when he’s impressing upon his students the importance of the regulatory process, he asks them to think about their day.

"That particular day, from the time you woke up this morning to the time you entered my classroom, think about what you encountered in the world," he said. "So much of what each and every one of us, on every ordinary day, is affected, for good or for ill, by regulations."

The alarm clock buzzing in the morning is powered by electricity regulated through energy markets, ensuring the grid maintains balance and delivers reliable power, he said.

"We enter a workplace that’s regulated by the Occupational Safety and Health Administration; we have lunch, and that’s food protected by [the Department of Agriculture]. In so many different ways, our lives are affected."

A native Chicagoan, Coglianese has studied regulation since he was a graduate student at the University of Michigan, where his doctoral dissertation focused on the rulemaking process at U.S. EPA and litigation challenging environmental rules.

In law school at Michigan, he focused on administrative law and rulemaking procedure.

"More deeply, what interests me about the rulemaking process is that most law today is made by administrative agencies," he said.

"And if you’re interested in how law actually affects the economy and how it affects society, the rulemaking process is the natural place to look because this is where the rubber meets the road, and details get worked out that make a difference in people’s lives and the course of their businesses."

The notion that most laws today are made by administrative agencies is one Republican lawmakers have been noting with increasing frequency and disdain.

Conservative representatives and think tanks, like the Heritage Foundation and the Competitive Enterprise Institute, have been urging the GOP to reassert itself through legislation that alters the rulemaking process.

"Clearly it’s the case that Congress punts on many of the different questions. That’s why we have the delegation of authority to administrative agencies," Coglianese said.

"It’s well-known that Congress can get credit for solving problems by saying they’ve passed legislation. But then when the tough calls are made by regulatory agencies, then [Congress] conveniently criticizes those agencies for overreach."

At a recent administrative law conference, Sen. Mike Lee (R-Utah) made a similar argument. He said lawmakers need to be held accountable for how legislation is ultimately implemented — and that the "REINS Act" would ultimately make Congress more responsible (E&E News PM, March 2).

The "REINS Act" aims to increase congressional oversight by requiring both chambers to vote on major rules before they take effect.

Coglianese said legally Congress already has all the authority it needs to review and override agency rules with "REINS," but gridlock generally prevents that. He cautioned, however, that the "REINS Act" could prove dangerous.

"Requiring agency rules to go through the legislative process for approval before they could take effect would almost certainly impact on the extent to which agencies could provide net-beneficial public protections," he said.

"In addition, the ‘REINS Act’ may also overly politicize the administrative process of developing rules if agencies come to focus on writing rules that can pass both chambers of the Congress instead of focusing, as they now are directed to do, on maximizing net benefits."

The other prized GOP bill is the "Regulatory Accountability Act," which would add procedural steps and analytic requirements for certain kinds of major agency actions. The U.S. Chamber of Commerce, along with conservative groups, has been urging passage of this bill.

Advocates say the measure would unburden businesses and help grow the economy, while critics argue extra procedural steps would grind the entire regulatory system to a halt.

Both sides of the argument, Coglianese said, overstate their case. Evidence shows that simply imposing more procedures has not directly enhanced agency decisionmaking. At the same time, agencies have been able to adapt to new procedural requirements without major disruptions to workflow.

Coglianese said the largest hurdle to successful public safeguards that maximize benefits and minimize cost may not rest solely on the system itself, but rather on the people who operate it and how the public views them.

"We seem to have a legitimacy crisis that is afflicting our legal system in general," he said. "Maybe at the end of the day, that’s the biggest problem of all."

He said people on the far left think the system is insufficiently protective and too slow, whereas people on the right say it’s too burdensome and restrictive.

"Neither account is actually fairly reflective of the system we have, and yet there is probably an element of truth to both perspectives," he said.

"One thing is clear, regulatory excellence comes down to people excellence, and we, as a country, have to think about creating conditions for attracting the very best people into our regulatory agencies and providing them with the resources they need to do a quality job," he said.

"We can’t expect to get top-quality regulation options at low budget and low staff commitment levels."

As chairman on the rulemaking committee at ACUS, Coglianese is charged with "fairly airing" the deliberative process of choosing recommendations to adopt on ways to streamline rulemaking and increase transparency and accountability.

Understanding the regulatory process is a "daunting task," he said.

Still, Coglianese said there is an asymmetry to how society views problems and how it views successes.

"We ought to look at what we could have done better, no question of that, but we shouldn’t lose sight that on a regular basis, we have a high degree of success for our regulatory system — a much higher degree than it often gets credit for."