The medical waste crisis that didn’t happen — yet 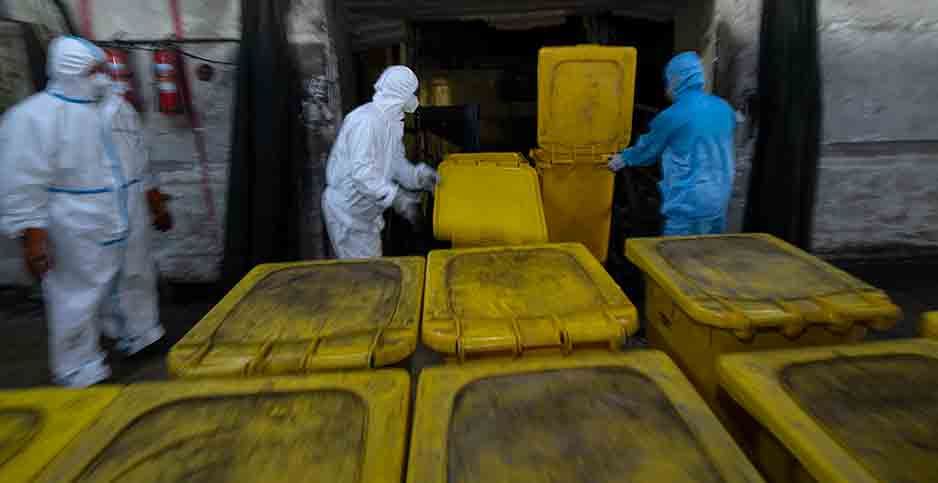 As COVID-19 cases surge in some regions of the U.S., experts say the anticipated crush of medical waste has not occurred.

At the start of the pandemic, experts braced for mounds of masks, gloves and gowns piling up in landfills.

That happened in China, where the government had to hastily build a new incinerator to handle a fourfold spike in medical waste (Greenwire, March 24).

"Anything that came in contact with the patient was treated like medical waste," Anne Germain, a vice president at National Waste & Recycling Association, said of China. "They didn’t have the same distinctions" for sorting the material.

In the U.S., there appears to be a decline in medical waste compared with the pre-COVID-19 era, according to trade associations. That’s largely because of a drop in elective procedures as people stayed away from doctor’s offices.

Yet other experts say it is not so simple, and they stress that regulations surrounding medical waste disposal are a confusing hodgepodge that fall under EPA, the Department of Transportation, the Occupational Safety and Health Administration, the Centers for Disease Control and Prevention, and, mostly, state agencies.

"The rules in North Dakota are a lot different than the rules here," said Bob Shaw, president of California-based Medical Waste Services. "In Nevada [and] Idaho, you don’t have to treat medical waste before it goes directly to the landfill."

Environmental justice advocate Omega Wilson, during an interview, called it "the Wild West."

These days, most medical waste is shipped from hospitals to autoclaves, where "hot steam kills all of the germs. It looks sort of like a soggy melty stuff," Germain said. Then it’s transported to a landfill.

But a small percentage of medical waste continues to be burned at incinerators, many located in Black and brown communities, releasing carcinogenic dioxins and furans into the air.

Ben Locwin, an epidemiologist and public health consultant, expressed skepticism about the accuracy of the tracking of medical waste in the U.S.

RMW is material that has pathogens and must be "red bagged." Other kinds of waste such as tubes and needles used for chemotherapy go in yellow bags. Pharmaceutical waste goes in blue.

"Even for someone on the ventilator, there isn’t a lot of waste," Germain said. "It’s not the same as someone coming out of surgery."

That’s different from Ebola, when "they were throwing away mattresses after they were used," explained Barnes Johnson, a former EPA director of the Office of Resource Conservation and Recovery.

Shaw, the California operator, said his sales have dropped 15% since March. "What happened was everyone saw China," he said. "It’s not that bad."

‘Out of sight and out of mind’

Early on, the National Waste & Recycling Association petitioned state regulations for some flexibilities, including about signatures and storage.

Most regulators opted not to grant blanket waivers, Germain said, and decided to consider issues on a case-by-case basis.

Environmental justice advocates, meanwhile, have been calling on congressional leaders to direct more funding to oversee problems associated with medical waste in Black and brown communities, where landfills and incinerators tend to be located.

"For decades, communities of color have lived near landfills and dumpsites," wrote Wilson, founder of the West End Revitalization Association in Alamance County, N.C., in a letter to the House Energy and Commerce Committee.

Wilson and several other environmental justice advocates called on lawmakers to hold a hearing, but so far none has been scheduled.

"It’s out of sight and out of mind," he said in an interview, adding, "It’s not a political question."

Wilson added, "I have been interviewed by internet media outlets that keep looking for me to blame this failure on Trump and Republicans. This clearly is a public health crisis issue that has large footprints in Democrat and Republican administrations since before I was born in 1950. Ignore the poor, people of color and powerless in poverty."

Today, fewer than 2,000 landfills exist in the U.S. — down from 10,000 decades ago. "They are scattered around the country — every population has one near them," Germain said.

She said operators have to jump through "a lot of hoops" to demonstrate an appropriate location. But "there will never be a time when people want to have a landfill near their home."

An EPA spokeswoman said the agency does not regulate or track medical waste and has delegated most authority to the states. EPA, however, does regulate incinerators.

In the ’80s and ’90s, hospitals throughout the country burned the waste on site without pollution controls.

But EPA, prodded by environmentalists, enacted stricter air pollution regulations. Today, there are thought to be about 20 incinerators burning medical waste in the U.S. but no one knows for sure, said Mike Ewall, founder and director of the Energy Justice Network.

EPA stopped publishing data in 2013, when there were 33, and they continue to shut down, Ewall said.

But, experts and advocates said, the ones that do still exist tend to be in communities of color or low-income neighborhoods, and continue to pose problems.

"Incinerators have gotten off the hook on so many issues and reporting requirements," said Tim Whitehouse, a former EPA attorney, now the executive director of Public Employees for Environmental Responsibility.

Stericycle, the country’s largest operator, has a history of hazardous waste violations at EPA and state agencies. According to EPA records, the company has 10 active violations, including six "significant violations."

One facility in Detroit has failed to complete monitoring and reporting requirements for years.

“Our members would love for it to go up. They could make more money.”

Whitehouse called it "absolutely horrible." The company did not respond to questions about the violations.

Judith Enck, a former EPA regional administrator, said virtually every incinerator she knows of is in a low-income community. "They site it there on purpose because they think there will be the least resistance," she said.

Baltimore is home to the country’s largest medical waste incinerator, known as Curtis Bay Energy. But according to Ewall’s data, only 5.8% of the waste burned there in 2017 came from Baltimore city. The rest came from 18 states, plus Washington, D.C., and Canada.

Even now, as the future of the pandemic remains precarious, Germain said she does not expect medical waste to increase.

"Our members would love for it to go up," she said. "They could make more money."