The million mile battery is coming. Here’s why it matters 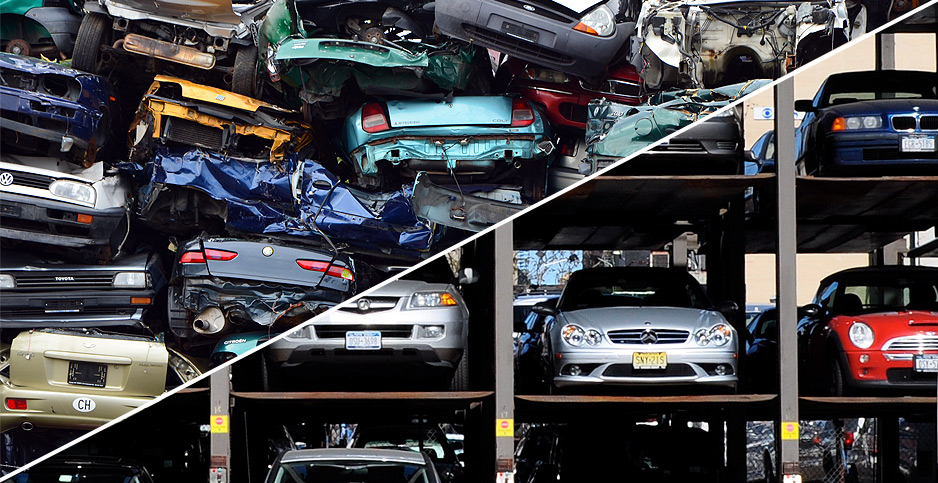 EV batteries are in the works that could last a million miles, upending expectations of what a car could do. Gzzz/Wikimedia Commons (Crushed cars); Matt Clare/Flickr (Stacked car park)

Tesla Inc., General Motors Co. and one of China’s biggest battery companies are approaching a milestone as important-sounding as it is puzzling. They want to make electric car batteries that can last a million miles.

A million miles? What does it mean, in a world where a car is considered a marathoner if it drops dead at 200,000 miles? What will the extra 800,000 miles be used for?

Car enthusiasts, EV advocates and battery experts interviewed for this story said that it is, in fact, quite a big deal, for some reasons that aren’t obvious at first glance.

"It’s a leap. Who needs a million-mile battery now?" said Michael Harley, the executive editor of Kelley Blue Book, which sets values for used cars. But, he added, "it’s a game changer."

How cars are used and priced could undergo mind-bending changes. Obstacles that stand between transportation and the electric grid could be cleared. And a single electric car purchase could literally last a lifetime.

Word of the electric ultramarathoner has come from several sources.

Since early 2019, Elon Musk, the CEO of Tesla, has hinted that a million-mile battery is part of the company’s plan. It may be part of the long-awaited Battery Day, when Musk is expected to reveal Tesla’s next steps on energy storage (Energywire, May 26). Yesterday, Musk delayed the event to Sept. 15.

Then, General Motors said last month that it is almost there on making one. And two weeks ago, the chairman of Chinese battery-making giant Contemporary Amperex Technology Co. Ltd., Zeng Yuqun, told Bloomberg, "If someone places an order, we are ready to produce."

The concept has been proved only in the lab, not in mass auto manufacturing, which is far harder. And many miles must be logged before anyone can know for sure how long these batteries endure.

Yet the possibility is, from many angles, a development that scrambles the expectations of the automobile.

Here are three ways that a million-mile battery could transform cars and electricity.

An EV that never ends?

The first, and most intriguing for drivers, is how the technology might shift the expectations for how long a car will stick around. To understand that, it helps to grasp why cars die now and what might change with a million-mile battery.

Past that point on the odometer, it is likely that a crucial cog of the car’s machinery will break through sheer fatigue, even if it’s been well-maintained. It’s often uneconomical to fix because it is likely that something else will break soon. The options then are a rebuild — which is pricey — or a one-way trip to the scrap yard.

Details of it bubbled up in a research paper last year by Jeff Dahn, a battery investigator at Dalhousie University in Nova Scotia. Dahn’s group is completing a five-year collaboration with Tesla on batteries. If borne out on the factory floor, Dahn will have made a breakthrough on how the battery does its cycling.

EVs use lithium-ion batteries, like the ones in your laptop or phone. They can last forever, but that doesn’t mean the experience of using an old one is enjoyable. Anyone who has owned a cellphone knows that once a battery weakens, it can’t last the day and needs to be plugged in all the time. In a car, that tired battery means traveling shorter and shorter distances with every charge.

Each charge and discharge of a battery, each coursing of electrons from anode to cathode and back, causes microscopic damage to a battery cell.

This mechanical fatigue and electrochemical wear — multiplied by the thousands of cells in an EV’s battery, and exposure to hot summer days and freezing winter nights — adds up to long-term harm that makes each cycle weaker.

"The concept of a million-mile battery is really a description of a service life of a battery," said Jason Burwen, vice president of policy at the Energy Storage Association. "How many years does the battery perform at or near its rated capacity?"

Dahn’s research demonstrated a battery cell that performed 5,000 cycles while retaining close to 90% of its rated capacity — far better than other designs. In other words, the technology stayed peppy while doing the equivalent of daily charging for almost 14 years.

With these capabilities, the battery "will last a very long time, beyond the life of the vehicle," said Sunil Chhaya, an energy and automotive expert at the Electric Power Research Institute.

It’s also possible that the rest of the EV could prove imperishable — or at least last a lot longer than drivers are used to today.

The intriguing thing for Harley of Kelley Blue Book and others is that an EV could survive dramatically longer because there are fewer things to break. "No lubricants, no points, no evaporators, no condensers, no spark plugs," Harley said. No belts, hoses or transmission, either.

So could an EV with this new ultramarathon battery actually go a million miles? And is that what drivers want?

"Do you want a pair of shoes that last the rest of your life? What if someone says, ‘For $300, you can have a pair of Converse All Stars we can bury you in’?" Harley asked. "Do people want to buy cars that last for the rest of their life?"

The conjecture for him has an answer.

"I don’t think they do," he said, citing the novelty and excitement that come with the new-car smell. "I don’t think customers today are ready for a million-mile vehicle."

And even if they were, it is possible that automakers would find such a vehicle unhelpful to their bottom line, if not downright alarming.

"Is Ford ready to build the last F-150 for everyone around the world?" Harley asked. "What kind of business model is that?"

Traditionally, a barrier among drivers to buying EVs — and all the climate benefits that come with it — is a worry about the battery.

"The question we get a lot is ‘What is it going to cost when I need to replace the battery?’" said Joel Levin, executive director of Plug In America, a nonprofit that promotes EV adoption. "There’s a lot of anxiety about that. People have the expectation of a cellphone battery dying as they use it, and they worry about that happening with their car."

The million-mile battery "turns it on its head," he said. "An $80,000 car seems pretty cheap if you can drive it five times farther."

The track record doesn’t yet exist to tell us how long today’s EV batteries will stay sprightly, to say nothing of a million-mile one.

"Nobody today has driven EVs that far," he said.

Yet even absent the million-mile promise, EVs are already changing the math of used cars.

The rule-of-thumb valuation at Kelley Blue Book — that a car loses half of its value after two years — is being revisited in the case of electric cars, Harley said. The company has had to "completely reevaluate and reestablish how we price a used EV because it lasts so much longer than an internal-combustion engine vehicle."

Chhaya is taking a wait-and-see attitude and wants independent verification of what Dalhousie University says it can do.

Synthesizing a battery cell in the confines of the lab is one thing. Assembling a chain of thousands of them in a battery pack, and mass-manufacturing them to be tough enough to go a million road miles, is something else.

Another part of Dahn’s research could alter how much batteries cost and by extension make EVs less expensive.

For its 5,000 cycles, the experimental battery cell was completely filled and drained, a metric known as full depth of discharge. Today’s EV batteries are damaged by full depth of discharge. To avoid it, they are programmed with guardrails around how much of the juice is actually used. "About 20-25% of the energy is carried without finding any actual use," Chhaya wrote in an email.

A battery that removes such guardrails could be correspondingly smaller, lighter and cheaper.

"This is more about cost than anything," said Burwen of ESA. "It comes down to how many cycles you can get out of the same capital expense."

The cost benefits for EVs might not end there.

Part of the cost of any vehicle to the customer is the cost of the warranty — an assurance by the manufacturer that parts will be replaced in a certain time window after purchase. For EVs, that warranty includes the battery, by far the most expensive component.

Dispensing of that warranty would be the manufacturer’s equivalent of a sigh of relief.

"If you think about it, if you’ve got a million-mile battery, you don’t have to do that anymore," said Matt Stanberry, a managing director at Advanced Energy Economy, a nonprofit that works on energy issues with automakers. "You don’t have to plan for that expense, which translates to you being able to drop the price of the package for your customer."

Experts pointed out that a million-mile battery would change the EV’s appeal to one crowd in particular: ride-hailing drivers, truckers and anyone else who piles on the miles.

An Uber driver and an operator of a trucking fleet have a big expense in common. They run their vehicles into the ground faster than the regular driver, and replacing them is a major expense of doing business.

But what if the vehicle performs nearly as well at 800,000 miles as it does at 80,000? Replacement costs could be eliminated, making the EV the ultimate high-mileage vehicle.

Another appeal relates to the fact that electric vehicles spend hours each day idle but plugged into the electric grid. Could the car fill its battery and serve as energy storage for the grid at the same time?

Despite its promise, this approach, known as vehicle-grid integration or VGI, has remained in the pilot stage. One big reason is that automakers are leery.

"OEMs [original equipment manufacturers] are really nervous that it’s going to put a lot of extra wear and tear on their batteries," said Levin of Plug In America. "If it is cycling three times more often, the battery wears out. Then the battery owner is going to be mad at the company that sold it to them."

But add a few hundred thousand miles of durability to the battery, Levin added, and it’s possible that automaker and customer worries could vanish.

"It makes VGI a lot more practical," he said.

Also, what if the car collapses but the battery is still humming?

The electric grid might beckon that battery into a lucrative second career. "That opens up to that battery being used as a grid asset, because you’re not worried" about its use in a vehicle any longer, said Burwen.

With its particular ability, the million-mile battery could be suited to one job in particular: shifting renewable energy from one part of the day to another.

California, for example, is facing challenges with producing megawatts of solar power in the middle of the day when the electricity demand is parked in the evening. The ability of these batteries to cycle deeply could make them especially helpful, Burwen said.

In all, the prospect of a million-mile battery looks to analysts like a Swiss Army knife that never rusts.