The most essential job on Arctic ice: ‘Polar bear guard’ 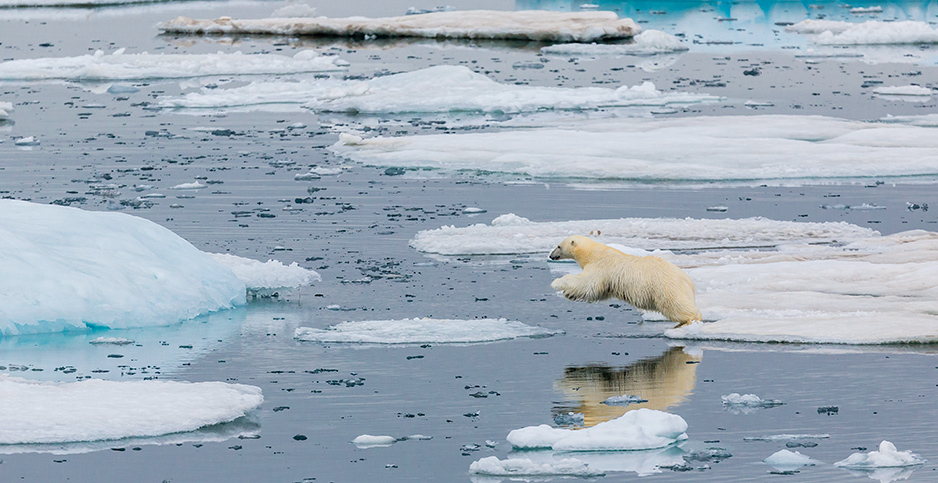 Researchers with the MOSAiC science expedition have seen at least two polar bears since beginning the voyage three weeks ago. This one was pictured in August near Norway. Michael Nolan/robertharding/Newscom

Thin ice can crack or break. Layers of snow can obscure deadly pools of meltwater or holes in the ice. Strong winds or storms can spring up unexpectedly. And roving polar bears are a fixture on the ice, their natural environment and preferred hunting grounds.

For a large research expedition like MOSAiC, with groups of scientists moving about on the ice, polar bears are among the biggest safety concerns. As a result, the expedition has appointed a number of polar bear guards to keep an eye out while participants conduct their work.

Over the past few days, German icebreaker Polarstern — the MOSAiC Expedition’s primary research vessel — has selected the ice floe it will use for its main research camp and moored itself to the ice. Participants have already begun to lay the groundwork for the ice camp.

Meanwhile, Russian support vessel Akademik Fedorov has begun setting up a "distributed network" of smaller science stations on nearby ice floes. It will continue these operations for about the next week.

That means lots of researchers from both ships are already hard at work on the ice.

On both vessels, guards are trained to prevent situations that would prevent either a person or a polar bear from getting hurt. On Akademik Fedorov, for instance, the crew is equipped with rubber bullets that may deter bears without killing them. And Polarstern’s guards are outfitted with flare guns designed to scare bears off before they’d ever need to resort to their rifles for protection.

E&E News recently caught up with Trude Hohle, a MOSAiC polar bear guard currently working on Polarstern, about her unique role on the expedition. She’s both the youngest and the only female guard on this leg of the trip, she said.

A resident of the Norwegian island of Svalbard, she’s an expert on polar bears and on Arctic nature generally. Her priorities as a guard, she said, are to keep both people and bears safe.

How long have you been in this line of work?

Maybe not this work, but I’ve been on Svalbard for five years. My first year was as a student being in an Arctic nature guide study, which is a university study. The entire year is up on Svalbard, doing a lot of practical training, of course — navigation, glacier rescue, polar bear safety, but also learning about flora and fauna, first aid, kind of how to take care of a group in these different types of experiences and things. So it’s a really good, good study for that.

This was while you were a student at the University of Tromsø?

Yes, but we were all on Svalbard. I’ve been done with that four years, summer of 2015, and then I stayed on Svalbard and I kept on working — first mostly as a guide, but then that just kind of drained me, always giving so much of myself.

And then I got more into, like, helping out researchers and kind of actually find my niche there. And so far I’m getting some good jobs, and I’m really happy with that.

And I also work as an operational engineer at Svalbard satellite ground station.

So you do a lot of different jobs?

Yes. I don’t want to get bored. I like to challenge myself. If something gets routine, then I’m like how can I make this more difficult on myself and then I’ll just struggle for a bit and have a hard time. I’m always doing that, which is quite annoying sometimes — why can’t I just be content and happy? [laughs]

What was the training like during the yearlong course you took?

That was the Arctic nature guide course, so that was my background — [all the guards] have different backgrounds. We had a full week at the shooting range, just practice, practice, practice. But also talking a lot about how to avoid getting in the situation of shooting a polar bear. So where are you, where do you have your camp, where do you have your lunch, where do you keep your food if you’re camping outside, when should you scare a bear. So more about the preventing.

Learning how to handle a rifle and a flare gun, it’s just hard skill, practical skill. The other things are more what I — that’s what I use the most. It’s always looking around, lifting my eyes, having a good overview. So it’s the preventative part that we’re very much focused on, and the other things are just skills that of course very much need to be there.

What advice would you have to avoid getting into a confrontation with a polar bear?

First, I want people not to be so scared. Because we keep hearing that it is the most dangerous thing, and I think people are frightened, and you should also enjoy the Arctic. You will not meet a stampede of polar bears. You should of course be careful, but you should not have this fear in you.

But I would recommend to not camp by the beach, to have one person focusing on being on the lookout for polar bears, keeping calm, not panicking. If you have a polar bear situation, listen to the person that’s responsible and do not scream and shout, and just keep calm and carry on.

And in a place like this, when you’re on guard, what are you looking for?

And it’s not enough to do it at 10 o’clock and be like, "Oh, that’s good, I can just stand here and chill the rest of the day." It’s constant movement of the eyes, but also watching the group. I’m very used to always keep an eye on the group. Like is everyone warm, and are there kind of more risks going on — does somebody need to wear a helmet because they’re standing under a cliff? So it’s for me not just being a polar bear guard, it’s about being a field assistant.

Let’s say, worst-case scenario, a bear does come up to the group. What happens next?

Depends on how far away it is. We should not have a bear coming into the group. There are many people on watch on the bridge, so I don’t think that’s a very likely scenario that a bear would just pop up in the middle of the group, really. But depending on distance, scare it, scare it, scare it, so it understands that it’s not welcome back. If it still gets closer, get people in and safe. I want both.

And that’s the rest of the team’s feeling, as well — people to be safe and avoid killing a polar bear.

What’s the closest you’ve come to one? Any really close encounters?

Around 25 meters. That was my second week on Svalbard, in this Arctic nature guide study. We were on the glacier course and the polar bear had visited us the day before when we were on the glacier. And one of the routines: There is no food in the tents, they’re always in barrels and boxes, a little bit away from the tents. So it kind of remembered that and came back to visit during the night.

And then we had polar bear watch that was awake, and he woke up the teachers, and in that situation the teachers just took the responsibility. It was not scared by flares, so it was trying a strategy all together. Making sound, does it work? No, it doesn’t work. Smash pots and pans together? No, it doesn’t work. OK. And then we left. Because there was a cabin not too far away, and we all got dressed and we just made a big loop around the polar bear and I think we entered the cabin around 3 or 4 in the morning. And then a boat came and helped us, and then in the end a helicopter had to come and scare the bear away from the camp.

Was that your first polar bear?

Yes. My parents were not happy. First of all, I hadn’t told them that I was moving to Svalbard until a month before. And we were out of cellphone reach, but the media got ahold of it. "Student group attacked by polar bear."

Is this your first big expedition on a ship like this?

Yeah, it is. I’ve been on ships before, but not so long and such big ships.

How’s it been for you so far?

It’s been good. Looking forward to being productive soon, because we haven’t really had that much to do on the transit. I think we will be very busy once we find the ice floe and all the stations will be set up.

This conversation has been edited for length and clarity.