The next big battlegrounds 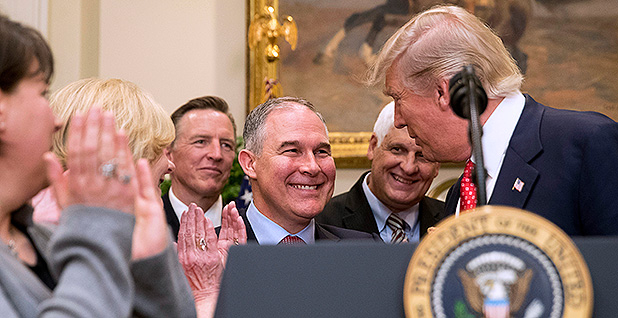 When U.S. EPA boss Scott Pruitt inks his proposal to ax the Clean Power Plan today, the epic brawl over the Obama-era climate rule will be nowhere near over.

Pruitt’s signature kicks off a lengthy regulatory process and sets up another court fight for a rule that’s already been at the center of some precedent-setting legal decisions. The move also becomes political fodder for friends and foes of the Trump administration’s climate policies, and could potentially surface on the campaign trail in contests for Congress and the White House.

It’ll all take a while to play out.

"I think this is the first step; I think the resolution of this whole package of issues is probably not going to come before the end of this presidential term," said Richard Revesz, director of the Institute for Policy Integrity at the New York University School of Law. The outcome will probably be determined by "whoever gets elected in the 2020 election," he added.

Here’s a breakdown of the next battles:

Pruitt hasn’t even signed his draft repeal yet, but top lawyers in blue states have already promised legal action.

"If and when the Trump Administration finalizes this repeal, I will sue," New York Attorney General Eric Schneiderman (D) said in a statement yesterday after Pruitt announced his plans to sign the proposal.

Others followed suit. California Attorney General Xavier Becerra (D) said, "I will do everything in my power to defend the Clean Power Plan." Massachusetts Attorney General Maura Healey (D) piled on, saying, "[W]e will be suing to protect the Clean Power Plan from the climate change deniers in this administration who are trying to move us backwards."

Lawsuits over the final repeal plan and a possible replacement rule — which would likely be much narrower than the Obama regulation — are a given. Those could take months or even years to play out, though, since legal challenges likely won’t be filed until after EPA’s moves are finalized. Challengers of the Clean Power Plan — including Pruitt — attempted to thwart the Obama-era rule before it was final, but those efforts were rebuffed in court.

"We are better lawyers than Scott Pruitt; we know we can’t challenge a proposed rule in court," said Sierra Club attorney Joanne Spalding, who’s one of many lawyers defending the Clean Power Plan in an ongoing lawsuit.

Less certain than future litigation is what happens to the legal battle over the Obama rule. Judges on the U.S. Court of Appeals for the District of Columbia Circuit have put that rule on ice while the Trump administration decides how to proceed. The Supreme Court intervened last year and blocked the rule after the D.C. Circuit declined to do so.

Some lawyers expect the D.C. Circuit to indefinitely delay the lawsuit, but supporters of the climate rule are holding out hope that the court will issue an opinion.

"We still think that the best thing to have happen would be for the court to decide that case," Spalding said.

A move by the D.C. Circuit upholding the legality of the Clean Power Plan could complicate Pruitt’s arguments that the repeal is needed because EPA overstepped its authority under the Clean Air Act.

Pat Parenteau, a professor at Vermont Law School, said he expects that the case "just sits there." It’s possible that Trump administration lawyers could ask to dismiss it as moot, given plans to roll back the rule in question, he said. "It seems to me like they could."

Backers of the Clean Power Plan could also ask the Supreme Court to remove the stay, potentially arguing that EPA has an obligation to regulate power plants’ emissions and that the Trump administration is slowing down that process.

"Going to the Supreme Court is a possibility," Spalding said. "We would definitely have to see what EPA says in this proposal."

The Supreme Court could also ultimately be asked to weigh in on the Trump administration’s repeal and possibly forthcoming replacement rule.

The federal regulatory process is a lengthy one, with a host of bureaucratic steps agencies are required to take before finalizing rules.

Once EPA’s repeal plans are published in the Federal Register, the agency will start receiving a deluge of comments expressing a wide range of views. The Obama EPA received more than 4.3 million comments on its draft Clean Power Plan. The agency is required to respond to those comments — although it can do so broadly — when it finalizes its plans.

"I’m sure there are going to be a lot of comments," said Revesz of NYU Law School.

EPA is also expected to hold a public hearing, where supporters and opponents of the rule will likely come out in droves.

The agency will go through that same process with its planned replacement, if it decides to issue one. A leaked copy of the draft rule suggests that EPA is leaving the door open to not replacing the rule. But if an alternative is pursued, it would be much narrower. The agency is expected to take comments on a possible replacement soon and could issue another draft regulation in the coming months.

Jeff Holmstead, a former EPA air chief who’s now an industry attorney at Bracewell LLP, expects the administration to finish both the repeal and a replacement rule in Trump’s first term. He speculated both of those could be finalized within the next 18 months. He also expects that the litigation over the Clean Power Plan repeal and replacement rules "would probably be finished before the end of Trump’s first term."

Meanwhile, the Trump administration is hearing competing views from industries about how to replace the rule — if at all.

That industry infighting could complicate the push to get a new policy out the door.

Some of Trump’s allies in the energy world — including coal magnate Bob Murray, CEO of Murray Energy Corp. — are pushing the administration to obliterate the rule with no replacement.

Other industry groups — including some utilities, the U.S. Chamber of Commerce and the National Association of Manufacturers — have pushed the administration for a dramatically scaled-back version of the Obama-era rule. A replacement is needed to give their industries certainty, they argue.

I "certainly expect that they will do a replacement rule even though they’ve left open the possibility that they might not," Holmstead said.

Congressional Democrats have made it clear they’re no fans of Pruitt’s climate rollbacks, but their hands are largely tied by their minority status.

"There’s very little if anything they can do at this point in time," said Jim Manley, former spokesman for then-Senate Majority Leader Harry Reid (D-Nev.).

He added, "If you look back at the last nine years, I think Democrats have become very aggressive about working with individual states to push back on the regulatory front, and I expect that to be the case here as well with plenty of pro-environment Democrats trying to elevate the issue to the extent possible."

"The single most important thing they can do is prevent changes in the Clean Air Act," he said. "Republicans can’t pass legislation to deny climate science or to revoke the obligations to deal with climate. … The Clean Air Act will outlast this administration."

Senate Republicans, meanwhile, have applauded the rollback of the Clean Power Plan. Pruitt opted to appear alongside Majority Leader Mitch McConnell (R-Ky.) in Kentucky yesterday to announce that the formal repeal was coming.

"For years, the Obama administration waged a war on coal and issued heavy-handed regulations to pick winners and losers among energy industries," Sen. Shelley Moore Capito (R-W.Va.) said in a statement. "It’s refreshing to see how committed the Trump administration is to pursuing a true all-of-the-above energy policy, and Administrator Pruitt’s announcement is another sign that America’s energy strategy is headed in the right direction."

Supporters of the Clean Power Plan are also hoping to make some gains with messaging campaigns.

"There’s a battle in the court of public opinion and also in the legal courts," Doniger said.

He and others are pointing to the huge health benefits that EPA estimated the Clean Power Plan would bring. The Trump administration appears poised to argue that many of those benefits were wrongly counted.

Some early talking points by environmentalists accuse the Trump administration of allowing premature deaths by rescinding the rule.

"With this news, Donald Trump and Scott Pruitt will go down in infamy for launching one of the most egregious attacks ever on public health, our climate, and the safety of every community in the United States," Sierra Club Executive Director Michael Brune said in a statement yesterday. "The damage caused by Trump’s willful ignorance will now have myriads of human faces, because he’s proposing to throw out a plan that would prevent thousands of premature deaths and tens of thousands of childhood asthma attacks every year."

Conservatives, meanwhile, are arguing that the rule is helping workers and the economy.

West Virginia Attorney General Patrick Morrisey (R) — who’s running for Senate in the Mountain State — led states in a lawsuit against the regulation.

"I was humbled to have led the state-based coalition that defeated the Power Plan in court through an unprecedented stay at the Supreme Court and am excited that the Trump Administration is taking the final step to kill this terrible, job-killing regulation," he said in a statement yesterday. "I believe these actions will help lead to a rebound for coal and will make lives better for coal miners and their families."