The next DOE secretary? ‘This is the guy you want’ 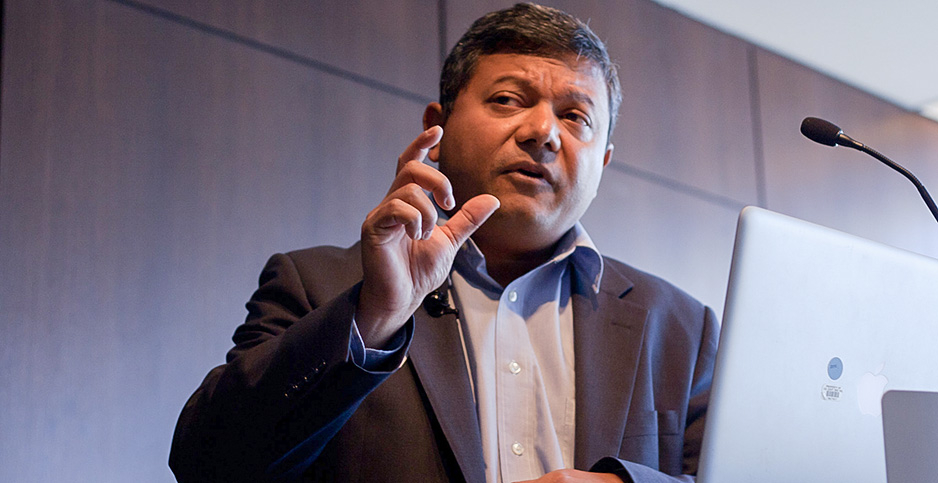 Arun Majumdar is shaping up as the most influential energy adviser in President-elect Joe Biden’s transition circle.

He is heading the Department of Energy’s transition team and is a leading candidate to be its secretary, giving him a prime perch to guide Biden’s energy policy. But who is he and what is his vision for the agency?

An immigrant from India who worked his way into the top echelons of universities, national labs and President Obama’s Energy Department, Majumdar is recalled by former colleagues as a talented scientist and administrator who can explain complicated technical matters to a lay audience — and has the acumen to work across the aisle on Capitol Hill.

Those skills could be put to the test if Majumdar takes a top government post, as DOE plays a leading role in Biden’s sweeping climate and energy agenda.

Biden has called for the nation’s electrical grid to be carbon-neutral by 2035, meaning that DOE will be the agency to lead initiatives to electrify cars and buildings, ramp up carbon capture at fossil fuel power plants, reinvent nuclear power, and navigate controversial calls to phase out natural gas, while also representing the U.S. around the globe as Biden tries to reassert U.S. leadership on climate change.

Biden’s DOE also may face a Republican Senate opposed to spending public dollars on energy, and conservative energy advocates who are ready to dismiss some or all of Biden’s energy priorities.

Other names under consideration as DOE secretary are Elizabeth Sherwood-Randall, who was deputy secretary under Obama and has long been a Biden adviser; Washington Gov. Jay Inslee (D), who ran for the 2020 Democratic presidential nomination with a strong climate and energy focus; Ernest Moniz, Obama’s second DOE secretary; and Dan Reicher, a Stanford University lecturer who had senior roles in President Clinton’s DOE and served on Obama’s transition team.

Majumdar has resigned from at least some of the many boards he sits on, a common sign that someone is being considered for a top government job. Asked if he was being vetted, Majumdar forwarded the request to Biden’s transition staff. Regardless of whether he ends up in a DOE position, Majumdar can leave his footprint on the agency now by directing future hires and the transition.

Majumdar came to Washington in 2009 as the first head of the Advanced Research Projects Agency-Energy (ARPA-E), an unusual arm of government that incubates transformational but underfunded energy technologies. He is a strong proponent of using government dollars to innovate the energy sector, including for fossil fuels.

It is difficult to find someone who has bad things to say about him. Senators and members of Congress say they encountered an affable, patient presence in Majumdar, though they often struggled to pronounce his name.

In 2011, Majumdar also took on the role of acting undersecretary at DOE, a position he held until he left government in 2012. His nomination to the undersecretary position never came to a vote in the Senate.

Asked for an opinion of Majumdar, voices on the conservative end of the energy spectrum point to their criticisms of the Biden energy and climate program writ large.

"It doesn’t really matter who Biden nominates to head the DOE," said Tom Pyle, the president of the American Energy Alliance. "They can’t really do that much damage to Trump’s regulatory reform agenda. All they can really do is serve as the piggy bank for renewables and electric vehicles."

"If you examine the Biden energy plan closely, it appears to emphasize technological optimism and innovation as a critical component to addressing clean energy needs and global climate change," he said.

Majumdar came to the U.S. at the age of 22 from his native India to get his doctorate in mechanical engineering from the University of California, Berkeley.

He had received his bachelor’s degree from the Indian Institute of Technology in Bombay, one of the system of India’s colleges that have become a font of U.S. tech talent.

After earning his Berkeley doctorate, Majumdar held positions at Arizona State University and the University of California, Santa Barbara, before returning to Berkeley in 1997. He has published close to 200 technical papers in his career.

There, he moved on a parallel track with a key mentor: Chu.

Both men were professors at Berkeley and at nearby Lawrence Berkeley National Laboratory, where Chu served as director while Majumdar was head of its environment and energy division.

At Chu’s recommendation, Obama nominated Majumdar to be the head of ARPA-E, which had been created under President George W. Bush but was not yet staffed.

Majumdar seemed to speedily absorb the political side — a skill that could work to his benefit working with climate activists, the scientific community and Republican skeptics, said Jeff Navin, a former chief of staff at DOE under Obama.

ARPA-E was launched amid an economic downturn and a wide partisan divide on Capitol Hill. Early on, there were widespread concerns that Republicans would dismiss it as an Obama pet project.

"Arun recognized that threat and worked very hard to build Republican support for the program," Navin said. "He went to the Hill, developed really good relationships with Republicans on the appropriations committees, explained the theory behind the program and was clear that it was investing in high-risk, high-reward projects, many of which would fail."

Navin noted Majumdar also gained the support of prominent business leaders such as Fred Smith, the founder and CEO of FedEx Corp., who added credibility to the program.

Majumdar was tasked with building an agency very unlike others in Washington. The model was the Defense Department’s Defense Advanced Research Projects Agency program, as well as Bell Labs, which in the mid-20th century invented the laser, the transistor and the photovoltaic cell. To emulate that, ARPA-E’s program managers aren’t career positions, but instead are stints from private industry for three or four years.

Ilan Gur was one of those first program managers and is now head of an organization which partners with national labs to support science innovation. He said Majumdar was able to attract a cadre of top-notch technologists and innovators and could converse on the technical minutiae in diverse fields of science, without betraying any of the stress of the political whirlwinds.

"What’s incredible is he managed to go through not only building relationships but also managing the politics, but in a really natural and authentic way, which is rare," Gur said.

Innovation programs at DOE became a prime target of congressional Republicans after the collapse of Solyndra, a solar company backed by a DOE loan guarantee that went bankrupt.

ARPA-E also was on the chopping block under President Trump, who recommended killing the agency multiple times in his annual budget request. Some conservatives say the agency steers DOE from its original mission and that the private sector should drive energy innovation (Greenwire, June 13, 2017).

Though Majumdar had no role in the loan-guarantee program in his seat at ARPA-E, he faced tough questioning from Republican House members who thought Obama’s people were giving funds to companies that didn’t deserve it and supplying favorite technologies an unfair advantage over others.

Faced with a confrontational question, Majumdar usually agreed and empathized with his questioner and — if the topic at hand were oil or gas — steered the conversation to how appropriate the solution could be if made more environmentally friendly.

He also voiced support for fossil fuels and technologies that fall outside liberal orthodoxy in combating climate change. Several examples were on display in testimony he gave to the Senate Energy and Natural Resources Committee in a 2011 hearing to be undersecretary.

On small modular nuclear reactors, for instance, he said, "there is a global competition going on in nuclear power, nuclear energy, and this is a way to move forward. I think we should move forward very aggressively in this."

With coal, he said, "we have the world’s largest reserves … and we should be using it in an environmentally responsible and affordable way. I mean, that is just my philosophy." Similarly, when discussing Alaskan shale oil, he said, "we should look at all options. There is not a silver bullet."

Leading House Republicans from that era were silent this week on the possibility of Majumdar as DOE head.

Rep. Fred Upton (R-Mich.), who sits on the House Energy and Commerce Committee, had no comment. Rodney Frelinghuysen, the former Republican New Jersey congressman who oversaw ARPA-E’s funding hearings as head of the Appropriations Committee, did not respond to requests for comment.

An insight into Majumdar’s attitude toward Congress comes from Bharat Bhushan, one of his mentors. Bhushan, now an academy professor at Ohio State University, was at Berkeley in 1989 and took Majumdar under his wing when he was a graduate student. Bhushan said he was a hardworking and brilliant collaborator.

Many years later, in 2013, Bhushan took a stint as a fellow supporting the Republican majority of the House Science, Space and Technology Committee. Though Majumdar had already left Washington by that time, Bhushan heard about his reputation from GOP congressmen and their staffs.

"Arun had a reputation of knocking on people’s doors in Congress on Fridays," Bhushan said. "He was not afraid to walk in the door and get the opposite view."

Navin credits support for ARPA-E to the foundations that Majumdar laid. The program still has champions in both parties. Navin said, "That was not guaranteed in 2009."

Hurlbut, the former DOE chief of staff, noted that despite Trump’s opposition, "it’s Republicans who have partnered with Democrats to increase the budget. That is a direct reflection of Arun’s political talents."

ARPA-E’s budget has steadily grown during the Trump administration, from $291 million in 2016 to $425 million in 2020. Last year, speaking to Congress, Majumdar recommended it reach $1 billion.

The funding has grown despite murky results. A recent study in Nature Energy found that ARPA-E’s projects aren’t succeeding at higher rates than other clean-tech startups (Energywire, Sept. 15).

After leaving ARPA-E and DOE in 2012, Majumdar returned to California and spent a year and a half as a vice president of energy at Google LLC.

He then took a professorship at Stanford, where he also co-directs its Precourt Institute for Energy.

He lives on the east side of the San Francisco Bay Area with his wife, Aruna Joshi. She was a classmate of Majumdar’s both at IIT Bombay and Berkeley, and they both earned doctorates there in mechanical engineering.

The couple have two adult daughters. According to their social media profiles, Shalini Majumdar is getting her master’s in business administration at the Wharton School of the University of Pennsylvania after a six-year career as a mechanical engineer at Microsoft Corp. Anjali Majumdar got her bachelor’s and master’s from Stanford and is now an electrical design engineer at Rivian, the electric vehicle startup.

One of Arun Majumdar’s public roles has been to co-host a series of virtual energy webinars with prominent leaders. In Majumdar fashion, they cover the many aspects of lowering carbon emissions in energy.

Guests have included senior figures at Royal Dutch Shell PLC — with a focus on its low-carbon initiatives — and Donald Evans, the head of the Department of Commerce under President George W. Bush.

Biden has said that department heads won’t be named until Thanksgiving at the earliest.

But plenty of those who have worked with Majumdar are rooting for him to take the top job.

"Especially in a transition time like this, this is the guy you want," Gur said.