The next front in the net-metering battle: Utah 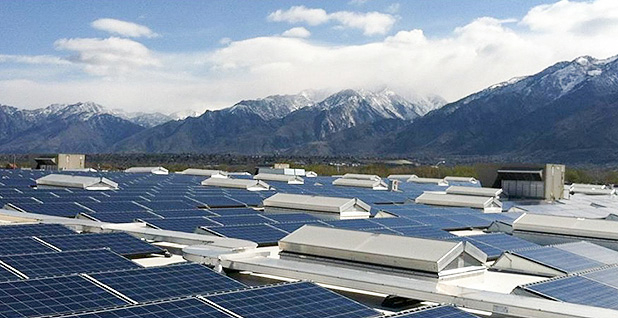 A proposal by a Utah utility could kill the state's nascent solar industry. Photo courtesy of the Utah Governor's Office of Energy Development.

But Blue Raven may no longer be welcome in its home state. Utah’s sole investor-owned utility, Rocky Mountain Power, has proposed a series of fixed charges on rooftop panel owners, in a move that photovoltaic advocates say would effectively crush the Beehive State’s nascent solar industry.

"They are not trying to send a warning shot across the bow," Lee said. "This is their way to sink the ship."

The fight represents the latest front in the ever-expanding national battle over residential solar. Florida voters rejected a proposal this month that would have paved the way for utilities to impose fixed charges on rooftop panel owners. Arizona witnessed a hard-fought election this fall, where five candidates competing for three seats on the state Corporation Committee voiced varying degrees of support for residential solar.

The most contentious battle was in Nevada, where state regulators last year overhauled the rules governing residential solar, slashing the credits panel owners received for sending power back to the grid. Prominent installers like SolarCity Corp. and Sunrun Inc. shuttered their Silver State operations in response. Policymakers in Nevada have recently shown signs of reversing course, though how far they may go in unwinding last year’s reforms remains to be seen (ClimateWire, Nov. 1).

Utah closely mirrors the Nevada debate. Indeed, some of the players are the same. Rocky Mountain Power and NV Energy, the Silver State’s leading utility, are both Berkshire Hathaway Inc. subsidiaries.

Many of the arguments are similar, too. Solar advocates say the proposal would effectively end Utah’s residential solar industry, which has added customers at a rapid clip in recent years. Rocky Mountain Power estimates it has more than 17,000 solar-panel-owning customers in Utah, up from roughly 1,500 four years ago.

The utility maintains that residential solar users are not paying their share of the electric grid’s cost, essentially shifting costs to non-solar users. The utility estimates solar owners annually underpay $400. The total cost shift is worth $667 million over 20 years, according to company projections.

To address those concerns, Rocky Mountain Power has proposed separating solar-owning customers from other residential ratepayers. Under its plan, residential panel owners would be subject to three monthly charges: a $15 fixed fee, a $9.02-per-kilowatt-hour levy on consumers’ peak monthly electricity use and 3.81-cent-per-kilowatt charge on total energy use. It also proposes a $60 fee for residential solar applications.

"Despite the benefits created by their private generation systems, the current rate structure does not adequately recover the costs to serve them and essentially over-compensates residential net metering customers for their generation," Joelle R. Steward, Rocky Mountain Power director of rates and regulatory affairs, said in written testimony submitted to the Utah Public Service Commission.

Solar advocates are suspicious of such claims. The utility’s objection is not to rising residential rates for non-solar users, they say, but falling profits borne from consumers’ declining energy use. A 2014 paper from the Lawrence Berkeley National Laboratory concluded residential solar has little impact on residential rates but could erode shareholder returns.

"We view it as a political move by Rocky Mountain Power to protect their monopoly franchise," said Thomas Plagemann, chief commercial officer and head of capital markets at Vivint Solar Inc. The Lehi, Utah-based firm is the second-largest residential solar installer in the United States.

A hit to solar jobs

There is a notable difference between the Utah and Nevada debates. Rocky Mountain Power has requested current panel owners be grandfathered under its proposal. Nevada regulators initially extended the changes in the Silver State’s solar policy to all residential solar users before reversing themselves recently.

Rocky Mountain Power has also questioned the benefits of residential solar. A cost-benefit analysis conducted by the utility concluded rooftop panels did little to offset peak demand. Infrastructure investment would also be required to accommodate increased flow of residential solar back onto the grid.

"We relieve the utility from the need to invest in transmission entirely," Plagemann said. "That’s the benefit of distributed generation. You have avoided transmission and distribution costs. They are somehow making an argument that is the exact opposite of conventional wisdom."

The debate comes amid a residential solar boom in Utah. The Beehive State’s total solar capacity leapt by 1,538 percent in 2015, according to the Solar Energy Industries Association, a trade group. Solar jobs are flourishing. The approximately 2,600 people employed in the sector during 2015 were more than double the roughly 1,200 people mining coal.

Residential solar represents about 15 percent of the Utah solar market. But it accounts for most or all of many installers’ business. Blue Raven is entirely reliant on residential sales.

Lee, the company’s CEO, predicted he would immediately have to lay off his 80-person Utah-based sales staff, along with a third of the corporate jobs now located in the state, if Rocky Mountain Power’s proposal was implemented.

"Would we survive? Yes," he said, noting the company could rely on its out-of-state operations. "Would it be painful? Extremely."