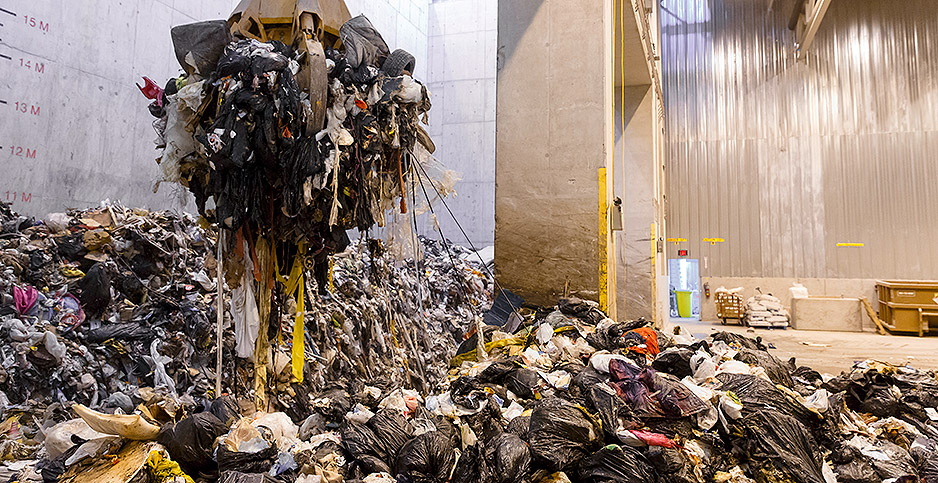 Municipal solid waste is a major fuel for companies that convert trash into electricity and other products. The waste-to-energy industry is seeking to expand, in part by tapping interest in addressing landfill emissions and climate change. Covanta

HOUSTON — Generating electricity from heaps of garbage isn’t a new concept, but climate change is intensifying interest in an industry with potential to slash both methane and carbon dioxide emissions.

Some companies are pushing gasification derived from old-school technologies like the blast furnace to generate low- or zero-carbon electricity. Others are backing incineration to produce power from trash that would otherwise end up in a methane-emitting landfill. Billionaires like Bill Gates are backing new ventures.

New Jersey-based Covanta Holding Corp. is among the waste-to-energy companies touting sustainability in the U.S. and abroad through combustion. In Texas, Systems International Inc. is aiming to help construct commercial power plants with a technology called ZEROS that applies an oxidation process to a range of waste materials. And trash-oriented projects are being discussed from Australia to Japan, with players such as Sierra Energy getting attention in the U.S.

"If you have a waste problem, I can convert that to a fuel," said Steve Clark, the inventor of ZEROS, which stands for Zero-emission Energy Recycling Oxidation System.

The U.S. has an issue with waste, and the solution is to produce less, said John Atkinson, an assistant professor at the University at Buffalo, State University of New York. Until that happens, Atkinson sees waste-to-energy as an avenue to pursue.

"We have to put the waste somewhere," he said. "And the options for where that waste goes are to a landfill or to a waste energy facility."

Atkinson said there was a time that waste-to-energy was dirty, unsafe and an "ugly industry." But he said regulations since the early 1990s have helped to clean it up.

For supporters, a new generation of waste projects could not only address emissions but fundamentally change how people view the garbage they pitch and the electricity that powers their homes. A plant paid to take trash that can produce power also could provide a way to stand out in an era where wind and solar installations already boast zero fuel costs.

But it’s unclear whether these companies can overcome decades of financial troubles to expand the use of waste-to-energy technology in the U.S. That’s especially true in regions where acreage is plentiful and landfills are common.

Doubts linger about domestic interest in additional incineration of municipal solid waste, as well as the feasibility of commercial plants focused on gasification using trash or other fuels. And some environmentalists would cringe at the potential sale of captured carbon dioxide from a ZEROS plant for enhanced oil recovery — using trash to extract more of a fossil fuel. What’s more, using waste can necessitate frequent deliveries of stacks of trash by trucks to a plant site instead of rail cars delivering coal or pipelines transporting natural gas.

Robin Schneider, executive director of the Texas Campaign for the Environment, referred to the industry as a "waste of energy." She said energy technologies that target municipal solid waste incorporate items that could be recycled or used in composting. Producers need to be responsible for the end of life of their products "so that recycling, compost, reuse, repair" make sense economically, she said.

Gasification technologies have not lived up to their promise, and incineration facilities create air pollution and toxic ash, she said.

Municipal solid waste-to-energy in the U.S. has largely focused on incinerating waste. But that is changing.

Its technology has also garnered support from the California Energy Commission and the Department of Defense. An "unbelievable" number of people have reached out about potentially purchasing a system, said Michael Kleist, vice president of business development at Sierra Energy.

Sierra Energy’s goal is to use steam and oxygen to heat waste to 4,000 degrees Fahrenheit, and CNBC recently featured the company in a piece about plans for dealing with trash.

The company’s gasification process uses a chemical reaction to create a synthetic gas, as well as stone and metals. The syngas, mainly hydrogen and carbon monoxide, can be used to produce power or make fuel by other parties — potentially still generating emissions. But Sierra Energy argues that power production from this gas would be cleaner than using natural gas to create electricity.

"We’re focused on creating the syngas," Kleist said. "What is done with that syngas, you know, is really specific to the location."

ZEROS involves oxidation and gasification and doesn’t release emissions. It aims to harness the types of materials many people try to run away from — municipal, industrial and agricultural waste; oil storage tank sludge; and used tires.

In the process, waste is injected into an oxidizer with some oxygen, according to a ZEROS slide deck. Carbon in the fuel is oxidized partially, creating a synthetic gas. The gas then goes to a second-stage oxidizer to produce carbon dioxide and high-pressure steam, the document says.

The steam is used to produce power and distilled water. The carbon dioxide can be sold as gas, liquid, solid in the form of dry ice or supercritical CO2, rather than being spewed into the air. Other products also are possible.

The system has struggled for years to find commercial footing beyond remediation jobs, and today no power plant uses the approach Clark is pitching.

But in December, Systems International announced plans for two upcoming ZEROS plants in Texas. Both would be near Houston — one in Chambers County, another in Liberty County. The company works with project developers that want to pursue ZEROS projects. The concept: a 120-megawatt plant that produces 20 million gallons a day of distilled water.

The origins of Clark’s ZEROS idea date to the 1980s and 1990s as he worked to clean up oil spills, including a major one in California.

"It all came from solving environmental remediation problems," Clark said.

Covanta, which employs incineration, caters to customers that want to reduce their waste to landfills and get energy recovery, said Paul Gilman, senior vice president and chief sustainability officer at the company. Although incineration produces greenhouse gases, the company says the waste-to-energy process can lead to net negative greenhouse gas emissions.

That’s in part because it helps avoid landfill emissions. The Global Methane Initiative has cited municipal solid waste as the world’s third-largest man-made source of methane.

Atkinson, the Buffalo professor, led an independent study — paid for by Covanta — that could not generate a realistic scenario where a specific Niagara Falls, N.Y., waste-to-energy facility had higher greenhouse gas emissions than if the same waste had been handled by landfill alternatives.

About two-thirds of what people put in their trash bags can be a biofuel, according to Gilman. That includes plant and animal materials.

"Trying to keep biodegradable waste out of landfills is a really good thing for greenhouse gas mitigation," Gilman said.

Covanta said that for every ton of waste processed, it’s possible to avoid a ton of greenhouse gas emissions via waste-to-energy, according to an EPA modeling tool.

Covanta’s website uses animation to explain the trash-to-power process, from the truck that drops off a load of garbage to getting trash ready for a combustion chamber that reaches some 2,000 F.

The process creates steam that turns a turbine to generate electricity that can be sent elsewhere, or the steam can be used for heating or industrial processes. Covanta said its U.S. fleet can generate enough electricity to power 1 million homes, while the volume of waste left behind is cut by 90%, and some of that is reusable.

The waste power plant business for Covanta largely started with communities and municipalities, and Gilman said commercial and industrial customers increasingly see potential. The company recently finished a plant in Ireland and has three under construction in the United Kingdom. More are possible, including one announced for China.

‘We will not’ disappear

The U.S. has about 1,800 operating municipal solid waste landfills today, according to David Biderman, CEO of the Solid Waste Association of North America. A number of closed landfills have been converted to uses as parks, nature preserves and golf courses, he said.

A generation ago, Biderman said, many unregulated disposal facilities were just dump sites without the sort of environmental protections in place at most U.S. landfills today. He noted that landfill gas is collected and used to create energy from more than 600 U.S. landfill sites.

"There’s a significant difference between highly regulated, state-of-the-art landfills in the United States and the open dumps that are common in the developing world," Biderman said.

Like others in the industry, Covanta has seen tough times, including a 2002 Chapter 11 bankruptcy when it was called Covanta Energy Corp.

Covanta reemerged in a new form in 2004. The company’s shares are now traded on the New York Stock Exchange, and it competes with other major players, including Wheelabrator Technologies Inc. Sam Zell, chairman of Equity Group Investments, is Covanta’s chairman.

As Gilman tells it, the idea for waste-to-energy is to balance energy revenue, waste disposal revenue and metals recycling to be competitive with landfills. He sees opportunities for Covanta over the next five to 10 years as largely overseas.

But he said some expansions are possible in the U.S.

Covanta’s gasification technology was marketed in the U.S. and elsewhere in the past with a similar cost as combustion, Gilman said. Yet people weren’t ready to jump into it given the reliability of combustion.

"Whatever new technology, new approach comes along for energy recovery, it’s still got to be competitive with landfills and with other technologies," Gilman said.

Despite widespread interest in cutting CO2 emissions, ZEROS is not on the radar of some industry experts. And previous efforts to get a ZEROS plant running in Texas didn’t move ahead. Clark and others are trying again, including with a January news release noting pitches to oil and gas companies and other energy players.

In a statement to E&E News, Clark pointed to the energy sector’s interest over the years in wind, solar and natural gas. He also said the hit to financial markets in 2008 played a role in delaying efforts to get ZEROS rolled out.

But now, as Clark explained, oil companies want large amounts of CO2 for enhanced oil recovery, and each ZEROS plant could provide 1.5 million tons per year. And utilities, he said, want to decarbonize and have fuel diversity as well as baseload power, characteristics that play to ZEROS’s strengths.

"So essentially, everything has shifted in our favor since the financial collapse, and we are attracting a great deal of interest from people who [used] to want us to just disappear," Clark said. "We didn’t, and we will not."