The next ‘regulatory czar’ 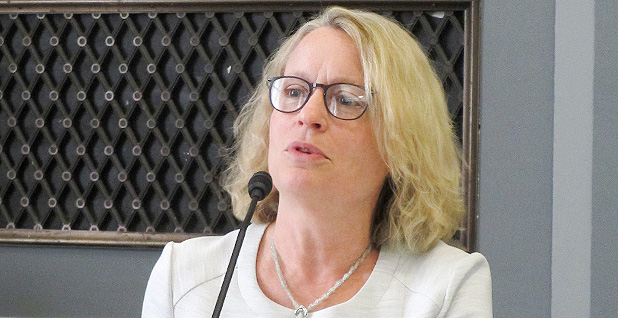 Lisa Heinzerling, a fierce critic of the White House regulatory review shop, is rumored to be a contender to lead that office if Hillary Clinton is elected. Photo by Public Citizen, courtesy of Flickr.

The leader of a wonky White House regulatory office isn’t as high-profile as the EPA administrator or Interior secretary, but many observers see it as an equally important job.

Officially, the gig is known as the administrator of the Office of Information and Regulatory Affairs, but it’s also been dubbed the "regulatory czar." As the boss of a small shop that oversees major federal rules before they go final, the position is a gatekeeper for some of the biggest government policies.

Given the OIRA chief’s major role, it’s also become one of the most controversial jobs in government. It’s a post that environmentalists, industry groups and others will be watching closely, and it’s certain to be one the next presidential administration fills carefully.

President Obama’s first pick to lead the office, Cass Sunstein, became a highly polarizing figure to both the left and the right during his time on the job. His successor, current OIRA boss Howard Shelanski, has been less of a lightning rod during his tenure, but still has been no stranger to controversy. He’s fielded criticism from regulatory advocates and lawmakers who argue the regulatory process is overly opaque.

"When I was fortunate enough to be nominated to be the administrator of OIRA, that position was one of the best-kept secrets in Washington," said Sally Katzen, a New York University law professor who led the office during the Clinton administration. "That is not the case anymore, and at least people within the Beltway understand the role it plays."

John Graham, who was OIRA boss during the George W. Bush administration, said, "The president decides how important the OIRA post will be." But, he added, "given the experience of presidents since Reagan, I expect the OIRA administrator to be one of the highest-priority appointments, after Cabinet officers and the [Office of Management and Budget] director."

Rumors are already circulating about which regulatory experts might be in the running to take the job under the next president.

Some see Heinzerling as a long shot for the job, given that she has advocated for dramatically curtailing the office’s power. Since working at U.S. EPA during the Obama administration, she has been highly critical of OIRA’s role in influencing federal rules. And she recently penned a recommendation that the next president "loosen the grip on executive agencies" in part by "uprooting the process of White House review of agencies’ rules."

Such a drastic overhaul would be welcome by some on the left, including Rena Steinzor, a University of Maryland School of Law professor. Steinzor, who has advocated that OIRA be eliminated, said she’d like to see Heinzerling on the job. She called her a "leading scholar" who has systematically debunked "the worst sides of cost-benefit analysis."

Progressive groups "are certainly interested in who’s going to run OIRA," said Amit Narang, a regulatory policy advocate at Public Citizen. He said OIRA has increasingly influenced regulations including environmental rules and others "in problematic ways."

John Walke, an attorney at the Natural Resources Defense Council, said, "OIRA has acquired the unfortunate but deserved reputation as a gatekeeper for whether and how the executive branch enforces federal law. There is a reason it is known as the place where regulations go to die, because the office unfortunately has assigned itself the role of scuttling or delaying implementation and enforcement of laws that don’t pass muster with the economists and policy officials in that office."

But former OIRA officials and others defend the office’s role and say its function of reviewing agency rules would occur within the White House even if the shop were eliminated.

"Any president is going to want to have some control over his agencies other than the option of firing the head of the agency," said Susan Dudley, who led OIRA during the Bush administration. "If you don’t have OIRA, all the political people in the White House are still going to be working very closely with the agencies. … It’s just that it won’t be transparent."

Despite pressure from the left, some expect OIRA to remain highly influential during the next administration.

"I am not sure Hillary Clinton would even think about changing this direction," Steinzor said, because she and others around her "seem to want to control things a lot," and that trend "is going to continue."

Graham, too, said, "I think both Clinton and Trump would give substantial power to the OIRA administrator. I doubt the job will change dramatically."

Republican insiders say it’s uncertain who might be in the running for the job under a Donald Trump administration, and it’s unclear whether the Trump transition team has considered the post yet.

The role of the office is likely to differ tremendously depending on who wins the White House, given the candidates’ dramatically opposed views on federal regulations — including environmental rules.

"They have proposed very different visions for regulations," Dudley said.

Many Republicans and conservatives see the role as a critical check in the executive branch, designed to rein in costly federal rules.

As for a possible Trump administration, "I’ve not heard names," said one energy lobbyist. But "regarding the ‘type’ of OIRA that might happen" under Trump, "some downtown observers (not necessarily connected to the campaign) point thematically to the Reagan-era OIRA, which actually functioned as a clearing house for unitary executive branch policy (as opposed to agencies independently making it up, or a number of uncoordinated czars doing the same). Which is what OIRA is supposed to do."

Narang of Public Citizen said a Trump administration "would likely turn to somebody that is in line with the kind of deregulatory policy agenda that Trump has been pushing."

Michael Formica, environmental counsel for the National Pork Producers Council, said, "OIRA administrator is one of the single most important roles to fill." He added, "It’s important to have someone who is both brilliant and capable and able to weigh all the competing interests (stakeholders from all sides, agencies, big egos) and return sound and smart final regulatory policy."

Given what Trump has said, "there are certain programs he either wants to increase regulation a lot or others where he certainly wants to decrease regulation." In the case of decreasing regulation, Trump "would probably want a very strong OIRA office because, as some people said, that’s the cockpit of the regulatory state, and those people are pilots."

Tozzi added that either candidate’s pick for the post will likely be a "very deliberative decision." OIRA is often called "the most important office you never heard of," he said.