‘The ocean is coming.’ A chieftess sees her islands sink 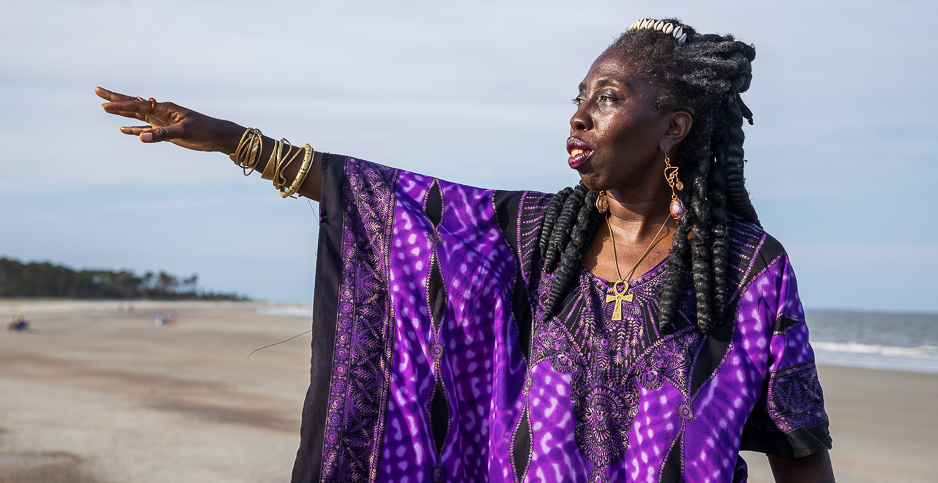 Queen Quet, chieftess and head of state of the Gullah/Geechee Nation, sees her people's homelands succumbing to rising seas and rising condominiums. The state of South Carolina wants to save its coast, too, but for other reasons. "They're not trying not sustain the Gullah/Geechee community. They're trying to sustain the tourism industry. That is the moneymaker," she said. Francis Chung/E&E News

"We won’t be leaving this land. We will rise and remain." — from Gullah/Geechee.

The Gullah/Geechee Nation of the south Atlantic coast is one of the most climate-threatened peoples in the world.

Its members are direct descendants of enslaved West and Central Africans brought to the United States to toil in remote wetlands — the Sea Islands — to produce indigo, rice and cotton.

Thousands of Gullah/Geechee later gained title to the lands they worked, in part because the islands were of little economic value to planters after emancipation.

Over the subsequent 150-plus years, the Gullah/Geechee developed a "nation within a nation" based on a unique blending of African and American cultures, religions and traditions.

Their homeland is in a climate change bull’s-eye.

These are some of their stories.

The 900-foot-long structure was installed early last year as part of a $10 million state effort to slow severe erosion at Hunting Island State Park, South Carolina’s most popular public beach. It’s been eroding for centuries, but the process has quickened over recent decades due to sea-level rise, storm surges and tidal inundation.

"What in the world is this, and how did it get here?" asked the chieftess and head of state of the Gullah/Geechee Nation as she stepped onto what looked like a concrete-capped sidewalk to the sea.

The South Carolina Department of Parks, Recreation and Tourism deemed the project necessary to rebuild the beach after Hurricane Matthew reduced it to a sliver of sand in 2016.

To Queen Quet, born Marquetta Goodwine on St. Helena Island, the groin is an eyesore that desecrates a cultural and spiritual landmark for the Gullah/Geechee. "At that time [it was proposed], I didn’t realize what they were doing out there, bringing in all that sand, spreading it out and creating another cookie-cutter beach," she said.

She was also dumbfounded by the state’s removal of abundant driftwood "ghost trees" that lined the beach as a natural buffer between tourists and the fragile dunes and maritime forest. A remaining bottle tree, whose branches were adorned with indigo-colored glass to capture spirits, a longtime Gullah/Geechee tradition, looked like a park amenity. It was not.

"This driftwood was natural to us. We sat on those trees, poured libation there, took images there, because we could still feel that ancestral energy and spirit there," Queen Quet said.

That same energy, derived from Gullah/Geechees’ deep knowledge of the Sea Islands, can also help chart the future of the South Carolina low country in the face of climate warming. That work has started through the Gullah/Geechee Sea Island Coalition, with support from nonprofit organizations, environmental advocates, conservation experts and volunteers.

"I think it’s because Mama Earth made everybody sit down for six months or more and see what’s happening around them," she said, referring to the COVID-19 pandemic and a spate of 2020 climate disasters, including hurricanes, floods and wildfires. "People are paying more attention. They’re like, ‘Wait a minute, the Gullah-Geechee are onto something.’"

In the Sea Islands, oyster beds are being rebuilt; shorelines are being restored; dunes are being planted with sea oats; turtle-nesting sites are better protected. Beaches continue to wash away, and interior wetlands are inundated every day by tidal swells. But many Gullah people view such climate changes with resolve. They adapt and endure.

Land loss from development pressure is unrelenting as other parts of the south Atlantic coast become crowded and speculators come looking for new land. Advocates say the Gullah/Geechee have been exploited by private-sector interests looking to secure land through tax forfeiture and unsolicited offers to low-income landowners. Lawsuits have been filed.

Despite all, Queen Quet says the Gullah/Geechee will keep fighting for what’s rightfully theirs.

"The ocean is coming in. It’s coming to meet us now," she said. "Different things that were on these islands 10 years ago, 20, 30, they’re just not here anymore. It’s a constant battle to prevent erosion of many kinds, not just the sand but of our culture."

Besieged by heat and flood

It was a Tuesday morning in Union Heights, one of the oldest urban Gullah/Geechee communities in the United States. A heat wave was building, prompting residents to seek shade havens for an early Charleston bake.

There were few options. Union Heights, hemmed in by highways, railroads and industrial plants, is a heat island for the nearly 1,000 Gullah/Geechee who live here. Many are elderly, and nearly 6 in 10 live below the federal poverty threshold, according to Census Bureau data.

Conditions will get worse.

Charleston experienced seven of its 10 hottest years between 2011 and 2019, and experts project that the city will see three times more extreme heat days every year by century’s end. It will also see more floods from tropical storms, extreme precipitation events and high tides on rising seas.

"We’re facing some big challenges," said Towne, a writer and community organizer who is trying to protect Union Heights from both natural and cultural climate disasters, including the displacement of its residents.

She and Wineglass-Smalls, through the Gullah/Geechee Angel Network, are raising funds to turn a 1,000-square-foot house into the "Yenna Chiren" ("Young Children") community center, which Towne called "a safe space where we can discuss what we’re dealing with."

The future is uncertain.

Union Heights, like other historically Black coastal communities, sits on low ground, and is pinched between the Ashley River and the former Charleston Naval Shipyard, where thousands of Gullah/Geechee found work in the 20th century. Its roughly 30-square-block grid of narrow streets and tiny lots is devoid of sidewalks or stormwater sewers. Green space is a handful of grass lots where homes, small businesses and churches once stood.

Yet rising land values and economic hardship are pushing out some longtime residents. Developers seeking to squeeze new houses onto old lots are canvassing Union Heights and other nearby neighborhoods. The new homes will have air conditioning, flood protection and six-figure price tags. Most will be sold to new urbanites.

Towne and Wineglass-Smalls are working with the North Charleston-based Community First Land Trust and other nonprofits to stem the tide of gentrification.

"People say it will be better because it brings in new people," said Wineglass-Smalls, a filmmaker and the founder of Wineglass Gullah/Geechee Productions. "But does it help the people already here?"

She answered her own question: "No, it doesn’t."

WARSAW ISLAND, S.C. — In 1953, seven years before Jeffrey Gardner was born on Warsaw Island, construction crews built a low berm across a wetland and topped it with a dirt road. The road links the Gardner family’s ancestral home to U.S. 21, the high road out of the low country.

Now 61, Gardner counts 44 immediate relatives — nine siblings and 35 nieces and nephews — on Warsaw Island. Dozens more have moved away, and countless Gullah/Geechee ancestors are buried in family cemeteries near the water’s edge.

"I’d need a calculator to count them up," Gardner said on a recent visit to Warsaw.

Gardner does not need a calculator to count how many times Warsaw Island Road goes underwater: "I’d say three or four times, some years more than that." All it takes is a hard rain, a high tide, a full moon. The road fades under rising water into a faint line in waving cordgrass.

During Hurricane Matthew, which swept the Sea Islands as a Category 2 storm in 2016, Gardner returned home to find salt water in the console of his pickup truck. Today, three motorized carcasses line the edge of a rental property he owns off Gardner Road. They will eventually give way to the soil or the sea.

So will the graves of his ancestors, some of which are unmarked and rising on saturated soils. "When your loved ones die, you plant them close to the water so they can go out with the tide," he said.

Now the tide is coming to take them.

Gardner is under no illusion that Warsaw Island will last another 300 years. But he’d like to give his family, "especially the older people," a fighting chance to survive the slow-moving climate disaster of sea-level rise. All he’s asking for is a higher road through the marsh, something the state hasn’t granted.

"When you fuss, they’ll come out and do a little patchwork and say, ‘OK, it’s good,’" he said. "I’m not an engineer, but if I’m walking out here at low tide and the water is up to my ankles, there’s nothing ‘OK’ about it."

No bait, no business

LADYS ISLAND, S.C. — Ed Atkins Jr. has collected bait shrimp from the headwaters of Distant Island Creek since he was a boy. It’s a Gullah/Geechee tradition he learned from his parents, who founded Atkins Live Bait in 1957 just off Sea Island Parkway.

The business, which also sells fresh oysters and clams, is struggling to stay afloat. The Sea Islands’ oyster beds are dying as waters warm and acidify. Spartina grass marsh, once teeming with shrimp and other aquatic life, is growing more saline with each high tide. The bait shrimp are moving elsewhere.

"Used to be you could go just about anywhere back here and catch good shrimp," Atkins said. "Now the water gets so hot you have to go to deeper water to get them. I used to go out about a mile. Now I got to go 5 or 10 miles."

Development pressure in the low country is also chewing up shoreline miles, placing more of the marsh under private ownership and off-limits to small commercial fishers like Atkins.

Some days, the cost of gasoline for Atkins’ outboard motors is higher than the value of his catch, a problem he meets with resignation and resolve. "You just got to go out more often," he said.

Atkins is 69 and said he could stand to go out less. But customers keep calling as the Sea Islands grow more populated.

"I’m already closed, ma’am. We ain’t got no bait," Atkins told a phone customer one late afternoon last month. "The only thing that’s alive here is me, and I ain’t worth cuss."