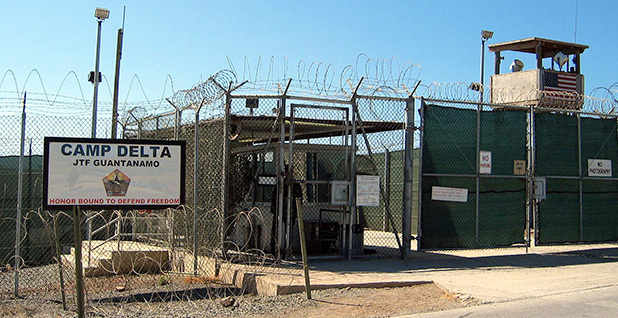 As Congress debates President Obama's plan to close the Guantanamo Bay military prison, two professors say they have the perfect plan for the naval base on Cuba's southeastern tip: a marine research center for the study of climate change. Photo by Kathleen T. Rhem, courtesy of Wikipedia.

Two academics think they’ve found the key to ending the yearslong standoff over the detainment center at Guantanamo Bay, Cuba. Their plan: Turn it into a marine research facility and international peace park.

Joe Roman, a conservation biologist at the University of Vermont, and James Kraska, a law professor at the U.S. Naval War College, argue in a new paper that the prison successive administrations have used for national security purposes could have a productive afterlife as a place to study the health of Cuba’s coral reefs, mangrove wetlands and other natural features.

"It has a diversity of habitats that have been protected in part because the area is cut off from the rest of Cuba," Roman told ClimateWire. "A majority of the land and waters are unoccupied, so therefore it has been great for a lot of the wildlife in the area."

Besides abutting a natural coral reef, the complex also features tropical forests and cactus forests that are endangered in the Caribbean.

The Cuban rock iguana — hunted elsewhere in the country — is among the species that proliferate on the base, which has acted as a kind of accidental nature preserve over the decades.

President Obama announced in December that the United States would take steps to restore full diplomatic relations with Cuba after six decades of hostility that in 1962 brought the world to the brink of nuclear war. Earlier this week, the White House released new regulations that ease travel between the two countries. Obama and his family will visit the island on Sunday for what will be the first visit by a U.S. president in more than eight decades.

The president has also pledged to close Guantanamo before he leaves office, but the proposal faces strong opposition from congressional Republicans.

"That’s the dumbest thing I ever heard," said Sen. James Inhofe (R-Okla.), a key committee chairman and appropriator, when told about the proposal to turn the base into a marine sciences center.

‘Guantanamo could become associated with redemption’

But even if Obama manages to secure a closure, the administration would face a problem about what to do with it.

Cuba holds that the centurylong U.S. occupation of Guantanamo is illegal, a continuing flashpoint between the two countries.

"I don’t think anybody thinks that the United States is going to hand over the base anytime soon to Cuba," Roman said. But by managing the research facility jointly with Cuba, the United States could defuse some of that tension, he said.

It could also counteract some of the adverse ecological consequences of Obama’s decision to resume economic ties with Cuba — a move that is likely to boost agriculture and industrial development on the island and reverse years of low growth and conservation.

Roman and Kraska, who met a few years ago while working together at the Duke University Marine Lab, note that the Caribbean ecosystem is experiencing a variety of changes linked to global warming, especially the degradation of coral reefs. The base could offer value to both the United States and Cuba as an opportunity for the countries’ researchers to study those trends.

"For the next generation, the name ‘Guantánamo’ could become associated with redemption and efforts to preserve and repair international relations and the planet," they write.

But their proposal would be impossible without congressional acceptance, and that is likely to be a very heavy lift.

Inhofe, for one, noted that Guantanamo is already performing a vital function by housing almost 100 terrorism suspects. He added that the alternative to the prison would be "to turn them loose so they can kill Americans."

"Why would we talk about a marine lab when we’re trying to save American lives?" he asked.

Obama has proposed transferring many of the remaining detainees and expediting the reviews for detainees that have not been charged or convicted.

"Guantanamo doesn’t make us safer and costs us hundreds of millions of dollars and ought to be eventually closed," said Sen. Brian Schatz (D-Hawaii). "Whether or not it has a future useful life, I haven’t looked into it."