The quest to unseat Alexandria Ocasio-Cortez 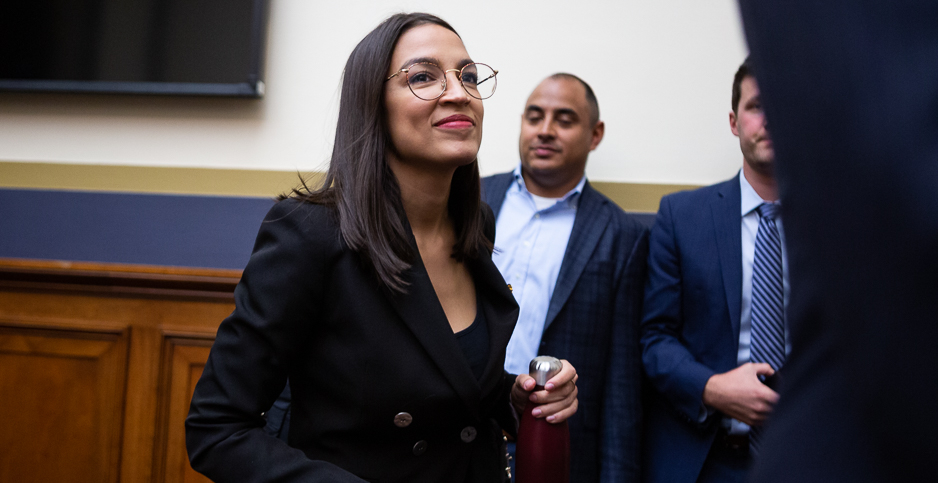 Rep. Alexandria Ocasio-Cortez has 5.9 million Twitter followers and regularly appears in shared videos on Facebook with progressives cheering on their biggest star.

But come 2020, she also has at least eight candidates back in New York City aiming to replace her, saying she has sacrificed the values of the Bronx and Queens boroughs she represents for national stardom.

"I actually care about what happens to not only the people who live there but beyond," Badrun Khan, a community activist running as a Democrat, told E&E News via email.

"Until I came along and called her out on TV, she was barely in the district — and I heard this from the people and the local elected officials. Now that she is being challenged, she shows up a lot more."

Ocasio-Cortez says she welcomes the challenges and isn’t taking anything for granted.

"Every single person is entitled to run for office. So I think it’s fine," she told E&E News.

Asked whether she’s confident about winning reelection, the congresswoman demurred.

"I never make statements like that," she said. "I feel like I have to earn my seat every single time, and I’m focused on doing the best job I can, and I believe that I’ve done so."

Khan and the other candidates vying to unseat Ocasio-Cortez face long odds in their efforts against the freshman lawmaker.

"I think there’s very little chance that she will be defeated," said Brian Arbour, a political science professor at the John Jay College of Criminal Justice.

Each candidate, no matter the party, is running to Ocasio-Cortez’s right.

They argue that the self-described Democratic Socialist’s policies are too extreme for the district. Many have said her national profile means she’s ignoring the real problems of her constituents.

Fighting Ocasio-Cortez, who has become closely identified with the Green New Deal, is frequently their main selling point.

Many of her opponents seem driven by the national attention — particularly in conservative media outlets such as Fox News and the New York Post — that they get from taking on such a famous and divisive figure who has become a central piece of conservative opposition to Democrats during the last year, Arbour said.

"This might be a long-term business venture for many of them. In the long term, that’s the real payoff," he said.

The national nature of the fight, and of anger toward Ocasio-Cortez, could also boost an opponent’s donations.

Khan said the government should take aggressive action on climate change, but the Green New Deal isn’t the way.

The proposal "is not really about climate change. … It’s about changing the infrastructure of the country, using climate change as an emotional flashpoint to increase the size and role of government."

Fernando Cabrera (D), a member of the New York City Council, is also running. He has labeled many of Ocasio-Cortez’s high-profile proposals as "socialism" and said her constituents prefer capitalism. He called the Green New Deal "pie in the sky" and argued it would increase costs for the poor.

Cabrera has also criticized her for slamming Amazon.com Inc.’s proposal to establish a major office presence in New York City, which it abandoned after a backlash from progressives.

"We have not seen a country where socialism has proven to work. People are not dying to move to socialist countries," Cabrera told the New York Post in October upon launching his campaign.

"Socialism" is what motivates John Cummings, a retired police officer and teacher, to run.

"I find socialism so antithetical to everything that this country is about, that it’s one of the reasons I actually jumped in the race," the Republican told the Independent Journal Review in July.

Scherie Murray, an immigrant from Jamaica, is another GOP candidate aiming to unseat Ocasio-Cortez.

"Instead of focusing on us, she’s focusing on being famous, mainly rolling back progress and authoring the job-killing Green New Deal and killing the Amazon New York deal," she told Fox News in one of the numerous interviews she’s done with the network since July.

Ruth Papazian, a journalist-turned-candidate, called the Green New Deal a "job-killer" in a Post interview and has focused on the anti-socialism message.

"It has been galling listening to Ocasio-Cortez push really hackneyed big-government ideas that have failed around the world. These include her Green New Deal and Medicare for All," Papazian (R) told Fox News in April, saying the Green New Deal "would get rid of air travel, would make tens of thousands of well-paid avionics workers jobless."

Arbour noted he had one caveat in predicting Ocasio-Cortez would win in 2020: He likely would have said the same thing about Joe Crowley, the longtime Democratic incumbent and House leader whom she famously upset in a primary last year.

But the freshman lawmaker doesn’t show any of the warning signs that Crowley did, Arbour said.

"Part of what I think makes AOC such a compelling figure is that she is really authentic to what that district is," he said. "She’s able to tap into national fundraising networks with very little time and effort to do that, because of her fame."

Ocasio-Cortez raised $1.42 million in the third quarter of 2019, more than any other House Democrat and nearly $500,000 more than her Republican opponents combined, according to federal records.

The Cook Political Report rates New York’s 14th District as D+29 on its voting index, making it one of the safest Democratic seats in the country. In 2016, Hillary Clinton carried the district with 77% of the vote.

Candidates have until April 2 to file to run in the congressional race. The primary is June 23.