The rich board private jets as coronavirus spreads 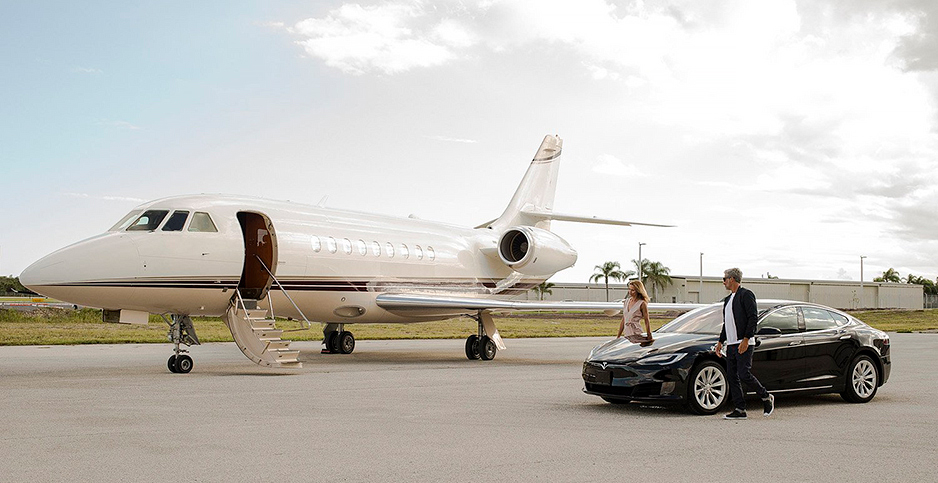 Private jet companies have seen a spike in interest since countries worldwide began locking down their borders in response to the coronavirus pandemic. The trend has raised concern about both income inequality and the private carriers' effect on carbon emissions. @flyvictor/Twitter

Private jet companies are seeing a spike in interest and bookings from wealthy Americans who are trying to return home as world leaders announce travel restrictions to combat the spread of COVID-19.

American travelers with less means, however, say they remain stranded abroad with little help from the State Department or U.S. embassies.

The situation shows how the coronavirus crisis is exacerbating economic inequality, as the wealthy and well-connected book private jets and obtain supplies like face masks and testing kits — luxuries not everyone can access.

The trend also bears relevance to another global crisis: climate change. Private jets release up to 10 times more planet-warming emissions per passenger than commercial planes, according to experts who study clean aviation.

At issue are chartered private jets, which can seat up to 18 passengers and cost anywhere from $4,000 to $20,000 per hour in the air, according to Air Charter Service USA.

Three private jet companies confirmed to E&E News that they have seen an explosion in interest and bookings since President Trump announced a 30-day ban on most air travel from Europe to the United States earlier this month. World leaders have since rolled out other travel restrictions.

"Year to year we are seeing a 300% increase in charter requests depending on the region of the world," Richard Zaher, founder and CEO of Washington-based Paramount Business Jets, said in an email to E&E News.

"When the European travel ban was first announced, charter requests went through the roof at closer to 400% increase for a few days," Zaher said. "It’s been incredibly busy."

Adam Twidell, CEO of PrivateFly, which has offices in England and Miami, said the company has seen 50-60% more inquiries than in the same period last year.

"Repatriations have been the majority of our flights over the past two weeks," Twidell said. "We have flown many Americans back to the U.S. from Europe, and we’ve had inquiries from many more."

Hannah Sharratt, a spokeswoman for London-based Victor, said private jet operators are playing an important role after commercial airlines have been forced to cancel hundreds of flights.

"We are seeing the role of private aviation shifting to become even more of a critical service provider and vital infrastructure for repatriation and medical evacuation, where the airlines cannot support," she said.

Sharratt added that private jet passengers are at lower risk of exposure to the virus that causes COVID-19, both in the air and when passing through security checks.

‘Forgotten on the other side of the world’

Not everyone can afford to hop on a private plane. More than 50,000 U.S. citizens remain stranded abroad and have asked the State Department for help returning home, a senior State official said during a conference call with reporters yesterday.

Peter Barbot, a scuba diving and yoga instructor from San Diego, told E&E News that he is stranded in India, where he arrived earlier this month to complete yoga teacher training.

"I’ve been trying to get home since I heard that they were banning all international flights," Barbot said in a phone interview. "And then the travel restrictions were announced, and all of the flights home were three or four grand."

"I’m a backpacker, and I teach scuba diving and yoga," he said. "So that isn’t an option with my finances. But if they have the means to do that, I say go for it. If I had the money, I would."

Indian Prime Minister Narendra Modi on Tuesday ordered a "complete" lockdown for the country’s 1.3 billion people. But even before that, Barbot said, the U.S. Embassy in New Delhi was not returning calls from dozens of worried Americans.

"I think the biggest problem now is that most people don’t even know we’re stranded here," Barbot said. "We feel like we’ve been forgotten on the other side of the world."

Meanwhile, thousands of Americans are believed to be stranded in Peru, whose government also enforced a lockdown last week. A Facebook group called "Americans Stuck in Peru" had 4,800 members as of this morning.

"We are calling the embassy every single day and no one is answering the phone today. Seems as if everyone’s left already," wrote one of the group members last week.

Asked for comment on the situation, a State spokesman said the department had repatriated more than 9,000 U.S. citizens from 28 countries as of Tuesday.

"At our Embassies and Consulates overseas, our Consular teams are working tirelessly to identify transportation options for U.S. citizens seeking to return to the United States," the spokesman said in an email.

"We continue to urge American citizens to utilize commercial transportation options where available," he added. "Where these options no longer exist, our teams are exploring all possible means to help Americans get home, including charter flights where appropriate."

During the conference call with reporters yesterday, Ian Brownlee, the head of State’s repatriation task force, said the department is working around the clock to help U.S. citizens return home from abroad, including from Peru.

"The total we’ve brought home, that 9,000, includes over a thousand brought home from Peru, and I’m pleased to say that there are two planes in the air as we speak coming — one from Lima, one from Cusco," Brownlee said.

"These are truly extraordinary times, and we want your audiences to know that the State Department is working tirelessly all around the globe," he added.

Then there’s the impact of private planes on another global crisis that predates the coronavirus pandemic: climate change.

International air traffic is down an estimated 70% amid the pandemic, ClearView Energy Partners said in a note to clients yesterday, citing data from the International Air Transport Association. That’s led to a drop-off in greenhouse gas emissions from global air travel.

But a surge in private jet flights could mitigate this trend.

The reasons for the discrepancy are twofold, according to the analysis. First, private jets can seat far fewer people, so each passenger is responsible for a greater share of the emissions. Second, private jets often make long trips without any passengers on board.

Mathew Lawrence, director of Common Wealth, said in a Skype interview that the discrepancy points to a larger trend of "carbon-based inequality."

"There is this intersection of deep inequalities of resources and carbon emissions," Lawrence said. "The wealthiest tend to emit far, far more than the bottom 15% of the global population. And even within countries, wealthier households tend to have higher carbon footprints due to things like flying in private jets."

This trend persists in the response to public health crises like the coronavirus pandemic.

"COVID-19 and all public health emergencies clearly don’t happen in a vacuum. They intersect with existing inequalities," Lawrence said. "So if you are lucky enough to own a home where it’s quite easy to work from home, then maybe being home for a few weeks is not too bad."

Still, Lawrence said he empathizes with the Americans who have chartered private jets to return home.

"I don’t begrudge that person who took that flight," he said. "You can understand why people have done that."

"I view Covid-19 to be overwhelmingly a public health issue, not a climate issue," he said in an email. "Job 1 is for everyone to be safe, and for social distancing to slow this thing down. I’m very sympathetic to the need for people stuck abroad to get home."