The rollback that automakers don’t want 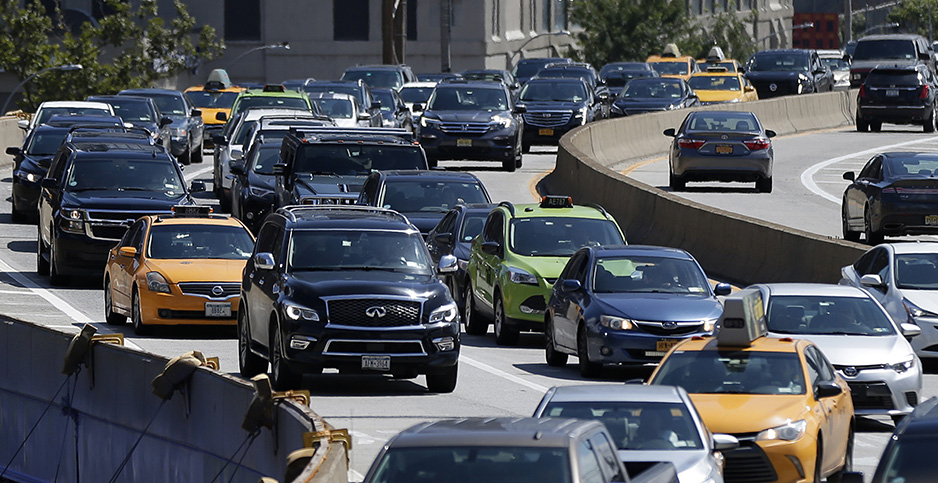 Cars slow down as they approach the exit to the Brooklyn Bridge on FDR Drive in Lower Manhattan in August 2018. John Angelillo/UPI/Newscom

Joining the call were senior officials from EPA and the National Highway Traffic Safety Administration, who told automakers to support the rollback or risk angering President Trump by siding with California’s more stringent tailpipe emissions rules.

But since the call, not one automaker has issued a statement of support.

That begs the questions: If the automakers don’t want the rollback, who does? And how did things get to this point?

The answers are complicated, and they illustrate the perils of peeling back regulations without adequately consulting the main industry that stands to be affected.

Who actually wants the rollback?

Looking beyond automakers, there are two key parties who are actively seeking the rollback.

The first is Big Oil.

Marathon Petroleum Corp., the nation’s largest refiner, engaged in a covert campaign to dial back the car rules, The New York Times reported late last year. The campaign included a lobbying blitz in Congress and statehouses across the country, as well as Facebook ads from an energy industry front group.

Oil and gas companies have an obvious financial reason to seek the rollback: It stands to increase their profits at the pump.

Under the Trump administration’s proposal, Americans will use 20 percent more gasoline per year by 2035, according to an analysis by Energy Innovation, a San Francisco-based energy and environmental policy firm.

And nationwide, Obama-era rules were projected to cut oil consumption by 200 billion gallons through 2040, according to an analysis by the Union of Concerned Scientists.

"The real beneficiaries of this policy are absolutely the oil companies," Dave Cooke, senior vehicles analyst at UCS, told E&E News when the analysis came out last year.

The second party is a select group of political appointees in the Trump administration who view the Obama-era rules as an example of regulatory overreach.

Chief among these ideologues is Jeffrey Rosen, deputy secretary at the Department of Transportation. As an official in the George W. Bush administration, Rosen developed a long track record of fighting environmental regulations (Greenwire, Feb. 20).

For instance, while serving as general counsel in the White House Office of Management and Budget, he emerged as a vocal foe of EPA’s authority to regulate greenhouse gas emissions from motor vehicles, power plants, petroleum refiners and other major polluters.

Trump last month nominated Rosen to serve as deputy attorney general. In that role, Rosen could help career lawyers at the Department of Justice defend the Trump administration’s rollback of the car rules from legal challenges brought by environmental groups, public health organizations and California.

How did things get to this point?

In 2009, President Obama stood in the Rose Garden announcing plans for aggressive new clean car standards. He was flanked by the leaders of 10 major automakers, including Ford Motor Co., General Motors Co. and Honda Motor Co.

In 2012, the Obama administration finalized the clean car standards as a joint rulemaking between EPA and NHTSA. The standards were aimed at getting cars and light trucks to travel an average of 54.5 mpg by 2025. That would dramatically reduce domestic oil consumption and greenhouse gas emissions from transportation.

Four days after his inauguration, Trump met with the CEOs of major automakers at their request. The topic of discussion was softening the Obama-era rules (Greenwire, Jan. 24, 2017).

In April 2018, former EPA Administrator Scott Pruitt announced the Obama-era rules were "inappropriate" and should be revised (Greenwire, April 3, 2018). The Alliance of Automobile Manufacturers, a powerful trade association, heralded the decision.

The following month, EPA sent OMB a proposed rule that called for freezing fuel economy requirements at 2020 levels through 2026.

At this point, automakers started to worry they were getting more than they had bargained for.

Indeed, it had become apparent that dialing back the Obama-era standards would set up a lengthy legal battle with California, which has the authority to set tougher tailpipe pollution rules than the federal government.

And while the battle played out in court, automakers would have to comply with a patchwork of requirements around the country, undermining their regulatory certainty and long-term planning.

This scenario became all the more likely last month, when the White House announced it was breaking off negotiations with California (Greenwire, Feb. 21).

Despite their initial request to Trump, automakers contacted for this story expressed a strong desire for the White House to harmonize the standards with California under a single national program.

"We’re disappointed that EPA, NHTSA and the California Air Resources Board have not been able to reach an agreement on future fuel economy standards, and will continue to encourage all parties to work together," Ford Executive Vice President Joe Hinrichs said in a statement to E&E News.

"A coordinated program with every stakeholder is in the best interest of Ford’s customers, and is the best path forward to achieve reductions in carbon dioxide emissions and support critical investments in new technologies," he added. "The auto industry needs regulatory certainty, not protracted litigation."

Gloria Bergquist, a spokeswoman for the Alliance of Automobile Manufacturers, said the group continues to advocate for "year-over-year fuel economy increases that align with the marketplace and provide compliance flexibilities."

"When preparing to release a major final rule, every Administration wants industry to stand beside them, and this administration is no different," Bergquist said in an email. "We still have not seen what will be in the final rule yet, but we are urging the administration to include year-over-year fuel economy increases. … We still also believe that one national program is important."

Bergquist added that the group is hearing a final rule will be released in May, "so there is still time for talks among all the stakeholders."

General Motors and Honda didn’t immediately respond to requests for comment this morning.

Dan Becker, executive director of the Safe Climate Campaign, has been advocating for clean car standards in Washington for more than a decade. He has his own theories about automakers’ intentions.

When automakers initially asked Trump for relief, they were hoping the government would provide more "compliance flexibilities," he said. Those are credits for technologies that help companies comply with the standards but aren’t necessarily related to the engine, such as more efficient air conditioning systems. Environmentalists call these credits "loopholes" because their benefits aren’t well-verified.

"When the automakers lobbied Mr. Trump on day four of the administration, they wanted rollback via more loopholes," Becker said. "What they got was rollback by meat ax and years of legal warfare with California."