The saga of ‘GoreSat’ is consoling scared climate scientists 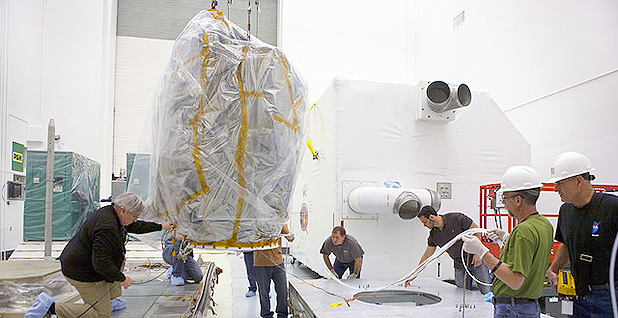 The National Oceanic and Atmospheric Administration's DSCOVR satellite comes out of storage more than a decade after the original mission was put on hold. Photo by Kim Shiflett, courtesy of NASA.

It was the satellite born of Al Gore’s sleepless night, and it gave us the blue marble.

While tossing in bed with insomnia one night in February 1998, the former vice president envisioned a satellite that would monitor the Earth’s surface, all of it in one frame, and beam it back to us in a never-ending live stream. The Gore satellite was designed to deepen our understanding of the Earth and to help track how humanity shapes the planet.

Gore was able to fast-track the satellite into reality during the waning days of the Clinton administration, but then the political winds shifted after he lost the presidential election to George W. Bush in 2000. The project was an early casualty. Nonetheless, with a different name and a slightly changed mission, the satellite finally blasted into space in 2015. It now provides some of the most stunning photos of our planet in history.

The long and politically fraught history of how the DSCOVR satellite eventually came into being and launched into orbit almost two decades after Gore thought it up is offering a note of hope to scientists who are worried about their research under President Trump. This story is based on interviews with those who worked on the satellite and protected it from withering during shifting political appetites. Gore himself declined through a spokesperson to discuss the effort.

The satellite’s very existence is a testament to the craftiness of researchers and their unwillingness to let certain projects die, said Paul Bledsoe, a Clinton administration climate change adviser.

"Scientists recognize that some ideas are premature for the government and political class to embrace, and so they keep it alive in the scientific community until the time is right and the money is available," he said.

In Washington and in research facilities across the country, the Trump administration’s perceived hostility toward climate science has many federal climate researchers worried. While it’s still unclear exactly how the administration or the GOP-controlled Congress will go after climate change research, lawmakers at a House Science, Space and Technology Committee hearing last week talked about the need to "rebalance" NASA to focus its efforts toward deep space and away from some of its work on earth science (Climatewire, Feb. 17).

All these years later, the mention of the Gore satellite still prompts a strange response from some of those involved in bringing it into the world. Some people sighed deeply on the other end of the phone line. A former administrator of the National Oceanic and Atmospheric Administration hung up when asked about the satellite. Another Gore official said it would bring tears to her eyes just to talk about it.

Saved from the scrap heap

Gore, so the story goes, envisioned a satellite that would provide a daily image of the sunlit side of Earth, highlighting the planet’s fragility and giving us a better understanding of how we are altering it.

Within weeks of his nocturnal vision, Gore was at the Massachusetts Institute of Technology to announce the satellite, which was essentially fast-tracked past skeptical congressional Republicans by shifting around existing NASA money. Gore named it the "Triana," after the first sailor to spot America on Christopher Columbus’ expedition.

The Bush administration was generally hostile to climate science, and especially research connected so indelibly to Gore. The satellite had been repeatedly targeted by Republicans who dubbed it "GoreSat."

Rep. Jim Sensenbrenner (R-Wis.) called it a "multimillion-dollar screen saver," and the project was abruptly shut down. After Republicans shelved the project, the Gore satellite was destined to be scrapped for parts — literally, as often happens.

But it was mothballed instead. It was delicately placed in a protective case and stashed in the corner of a clean room at NASA’s Goddard Space Flight Center, said Justin Kasper, a researcher at the University of Michigan.

Not long after Kasper began the project as a graduate student at MIT, he had a crash course in politics. It was something he never followed closely. Kasper said he would leave class to watch C-SPAN hearings of Washington lawmakers debating the political worth of a project that was in his lab.

Kasper saw the end coming. So he saved all of his notes, which were invaluable in retrofitting and retooling the satellite a decade later. He said the process gives him hope at a time when scientific research is expected to make radical shifts.

"It helps me stay grounded. There is change every time there is a new administration. Sometimes things get suspended; often, they might just come back or even the people talking about suspending it, they get a better sense of what the value is and they change their mind," he said.

"The most important advice I could give is don’t stop communicating the importance of your work because of any anxiety about where things are going," he added. "It’s important that now, of all times, that you keep educating, keep informing people who are interested, decisionmakers, about the value of your work."

Bringing the Gore satellite back to life, albeit with a somewhat new focus, was a priority of the Obama administration.

The satellite was given equipment to monitor solar storms and other space weather that can affect the electrical grid on Earth. It now sits at the L1 Lagrange point, about a million miles from Earth. It also monitors how the planet’s ozone, cloud cover and seasonal changes happen, making comparisons over time easier.

And it provides a more thorough picture of climate change.

That a satellite can live in limbo for more than a decade, then come back to life and produce essential research, should demonstrate to scientists that their work is not lost, said Ghassem Asrar, a NASA official at the time and now director of the Joint Global Change Research Institute in Maryland.

He said that even with the constant tension between Democratic and Republican administrations, cooler heads prevail and projects have a way of finding new life.

"The challenge and opportunity for the scientific community is to really stay objective, and do the science the way that it should be done, not biasing it toward any particular perspective, just presenting their finding as best they can in a very objective and impartial way," he said. "That’s the goal every scientist aspires to, but as human beings we have political perspective, too. Sometimes, unfortunately, that taints our perspective."