The silver lining for EPA in Supreme Court climate ruling 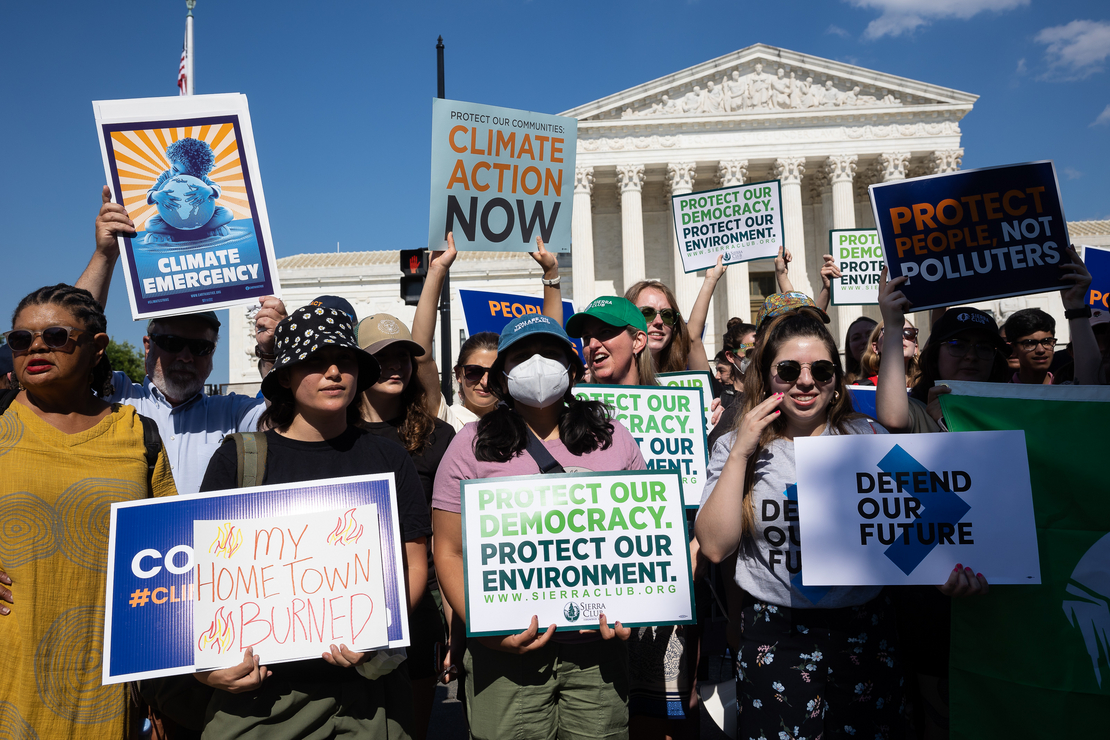 The Supreme Court’s decision last week may still allow EPA to write meaningful climate regulation, even as it consigned to the scrap heap any future ambitions to use the Clean Air Act to transform the nation’s power grid.

The West Virginia v. EPA ruling, and the legal process that led up to it, delivered some important wins for climate advocates, even as it limited the scope of future rulemakings. It confirmed that EPA has the authority to regulate power plant carbon, set power plant emissions limits and do more with a future rule than tinker with heat-rate improvements at existing facilities.

“While the petitioners are touting this as a win for them in their deregulatory agenda, it is not everything they hoped for,” said Tom Lorenzen, a former Justice Department official and current attorney at Crowell & Moring LLP.

Red-state and coal industry petitioners achieved their primary goal in challenging the long-defunct Clean Power Plan. The court’s decision ensures that for the foreseeable future, EPA will not interpret its Clean Air Act authority as allowing for a rule that shifts generation from fossil fuels to renewables energy.

It also guarantees that EPA will write its rules, like the two draft regulations for power plants due out early next year, under a cloud of legal uncertainty that is likely to limit their scope.

But the high court’s ruling did not address a bid by the Trump administration’s EPA to limit future administrations to rules that require only a handful of heat-rate improvements at individual fossil fuel power plants. Analyses have shown that such a limit could actually add to emissions by lengthening the useful life of some coal-fired power plants.

Embedded in the Trump administration’s Affordable Clean Energy (ACE) rule for existing power plants, which was finalized in 2019, was an assertion that the “plain meaning” and “unambiguous” statutory language of the Clean Air Act required it to write a rule focused only on those heat-rate improvements.

Trump officials hoped the U.S. Court of Appeals for the District of Columbia Circuit or the Supreme Court would bless that interpretation of EPA’s authority under the Clean Air Act, effectively handcuffing subsequent administrations that might be interested in more strenuous regulation.

But the D.C. Circuit rejected the ACE rule. The court ruled that the agency had failed to justify why it declined to achieve greater emissions reductions with a stronger rule, despite leeway in the Clean Air Act.

“So ACE still has the same potential flaw to it, which is that it’s based on a reading that they could do no more,” Lorenzen said.

“If they had said, ‘We might have more authority, but we nonetheless think this is a reasonable interpretation and this is as far as we want to go,’ [the ACE rule] might well be back in place and then the Biden administration would have to think about undoing it if they want to do something more,” Lorenzen said.

Most Clean Air Act experts say that even if ACE had taken effect, the Biden EPA would have little difficulty in rolling it back and replacing it with a new rule. It could follow in the footsteps of the Trump administration, which used a single rule to both repeal and replace the Clean Power Plan.

“The explanation might have looked a little different if the Trump administration had justified the ACE rule in a different way,” said Richard Revesz, a law professor at New York University. “But I don’t think it would have taken any extra time to do it, it would have just been a somewhat different explanation.”

EPA is now likely to ask the D.C. Circuit to remand the rule to it for a rewrite, which is due to be proposed early next year. The high court’s decision leaves EPA substantial latitude to regulate carbon through the power sector — just not through generation shifting.

When it agreed to take up the challenge to the Clean Power Plan, the Supreme Court declined to review not just the ACE decision but also the D.C. Circuit’s rejection of another Trump administration argument that sought to prevent EPA from regulating power plant carbon entirely.

That contention has been circulating for years among anti-regulatory advocates on Capitol Hill and in Washington think tanks. But most Clean Air Act experts say that by leaving the lower court’s decision in place, the Supreme Court has now settled the matter.

“I think as a practical matter, that argument is no longer really an issue,” said Jeffrey Holmstead, a partner at Bracewell LLP.

When petitioners filed their request for certiorari to the Supreme Court last year, they also asserted that the Clean Air Act’s language “makes it plain” that states, and not EPA, should set emissions standards for existing sources regulated under Section 111(d) of the law.

The provision gives EPA the job of setting “guidelines” for states, which then formulate their own implementation plans that are submitted for EPA’s approval. Attorneys general from some states — led by North Dakota — argued that the provision gives states, and not the federal agency, the authority to determine how much emissions reductions their sources must deliver. That reading would have undercut EPA’s ability to set a national standard.

“There has been this argument all along that 111 is just procedural, it’s just kind of a box-checking exercise for EPA, and that it’s really the states that are the ones who are coming up with the emission limits,” said Jay Duffy, an attorney with the Clean Air Task Force who represented environmental respondents in the West Virginia case.

But the decision penned by Chief Justice John Roberts released last week affirms that the “the agency, not the states, decides the amount of pollution reduction that must ultimately be achieved.”

“So that’s an important win as well,” he said.

The Roberts majority opinion found that the Clean Power Plan’s “systemwide” approach to power sector decarbonization is out of bounds. That approach encouraged trading that fossil fuel advocates characterized as a requirement that fossil-fuel-based utilities subsidize their greener competition.

The court noted that Congress has not enacted legislation authorizing a cap-and-trade system for carbon, and opined that EPA was relying on a faulty interpretation of the Clean Air Act to do an end-run around Congress.

But the court didn’t foreclose the possibility that EPA might use some form of averaging among fossil fuel power plants to deliver greater reductions at lower cost in a subsequent rule.

“The court went out of its way to say it wasn’t deciding that issue,” said Holmstead, who served as EPA air chief under former President George W. Bush.

Holmstead said EPA could find guidance about the court’s thinking in a section of the majority opinion that discusses EPA’s cap-and-trade program for mercury. Unlike the Clean Power Plan, which set emissions limits for coal that couldn’t be achieved on-site, the mercury rule sets standards that can be met by individual power plants. But it allows for them to be met through trading instead.

“So you could certainly imagine a trading regime that doesn’t run afoul of the Supreme Court’s decision,” he said.