The skeptics who could snag science adviser slots 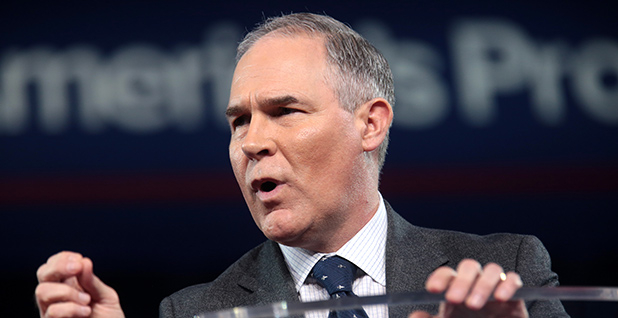 A number of people who reject the findings of mainstream climate science are being considered by the Trump administration for spots on EPA’s Science Advisory Board, a voluntary but influential panel that reviews science used in environmental regulations.

At least one nominee hopes to use a position on the board to challenge the science undergirding many environmental regulations. One has said in a statement that the world must "abandon this suicidal Global Warming crusade." Another compared people concerned about climate change to "Aztecs who believed they could make rain by cutting out beating hearts."

EPA has submitted 132 names for public comment as possible members of the panel. About a dozen of them have made comments rejecting mainstream climate science. Many have connections to the fossil fuel industry or conservative think tanks, and some have received funding to attack the findings of mainstream scientists that humans are warming the globe at an unprecedented pace through the burning of fossil fuels.

The selection of any of those researchers would be the beginning of a very different advisory board that would bear the hallmark of the Trump administration’s position on climate change, said Steve Milloy, an attorney and longtime EPA foe who worked on President Trump’s transition team for the agency.

"Had some other Republican won the presidency and a swamp creature taken over the EPA, this would not be happening," he said, "but thank God for Scott Pruitt that he’s got the courage to do this."

The Heartland Institute — a Chicago-based free-market think tank that pushes alternative climate science — nominated many of the current prospects.

Heartland Institute spokesman Jim Lakely said in an email: "We applaud any effort by Administrator Pruitt to bring qualified non-alarmist scientists onto the EPA’s advisory boards. There is a vigorous debate over the causes and consequences of climate change, and it’s vital that EPA acknowledge that fact and have a more balanced approach to the agency’s rule-making."

The long list of nominees — identified by EPA staff members who oversee the advisory board — also includes mainstream climate scientists who have extensive experience working with the United Nations and EPA on climate change. Former top Obama EPA science official Paul Anastas made the list.

The deadline for public comment is set to expire Sept. 28. After that, EPA boss Pruitt will have final approval on the candidates. The board has 48 member slots, 15 of which expire at the end of the month. It’s not clear how many positions will be filled.

The SAB, created in 1978, is tasked with "independent advice and peer review on the scientific and technical aspects of environmental issues to the EPA’s Administrator." An EPA spokesman has said the agency wants industry to have a greater role than it has had previously in evaluating the science used by EPA to craft regulations.

Traditionally, most of the SAB members are from academia, though some have also come from industry and environmental groups.

The SAB is essential to the functioning of EPA because it is chartered by law to ensure the agency is using the best available science for regulations, said Peter Thorne, the board’s current chairman and director of the Environmental Health Sciences Research Center at the University of Iowa. He said the SAB has a wide range of tasks that touch on almost every aspect of EPA’s functioning. He said it’s not just EPA that draws on its work — it’s also state governments, nongovernmental organizations and private companies.

"The EPA Science Advisory Board needs to have people who are well-versed in the science that underlies the decisions that EPA makes, so if there are people who end up on the board who have views that are not grounded in solid science, then that is a problem," Thorne said.

Here are some of the skeptical nominees under consideration:

Joseph D’Aleo, a certified consultant meteorologist and co-founder of the Weather Channel: He has run climate skeptic websites and has appeared as a speaker at Heartland conferences. D’Aleo said his priority on the board would be attacking the endangerment finding, the legally binding document that holds that carbon dioxide and other greenhouse gases harm human health and must be regulated by the executive branch. He said he wants to challenge the finding because it could otherwise be used later to build back Obama-era environmental regulations.

"We’re going to push for reconsideration, start from scratch and put together the best science," he said. "If CO2 is not a serious pollutant, let’s focus the attention of the EPA on other issues."

Edwin Berry, a meteorologist and atmospheric scientist: He has funded his own climate research and says human carbon dioxide emissions do not cause climate change. He has compared those who believe in human-caused climate change to "Aztecs who believed they could make rain by cutting out beating hearts and rolling decapitated heads down temple steps." On his Twitter account, he has called Islam "a death cult" and has encouraged motorists to drive into protesters.

Berry, in an email to E&E News today, described his tweet as a joke and said he does not advocate violence.

"Clearly, my tween says to slowly drive to not hurt anyone," Berry said in the email, misspelling "tweet."

Berry, who confirmed that he and a number of other skeptics were nominated by Heartland, said he wants to use his position on the board to show that humans barely contribute to atmospheric carbon dioxide levels, which he claimed are mostly driven by natural factors.

"Let’s get over this whole thing about climate change being an important thing, because in fact we humans have a negligible impact on climate," he said. "And if we had the Paris Agreement and everything else, it wouldn’t do any good anyway."

Alan Carlin, a retired EPA employee who is affiliated with Heartland: He fought the agency’s crafting of the endangerment finding. Carlin, an economist, was at the center of a political firestorm under Obama after he produced a widely criticized 93-page report comprising cherry-picked scientific data and blog entries concluding that regulating carbon dioxide was "the worst mistake that EPA has ever made."

Kevin Dayaratna, a statistician at the conservative Heritage Foundation: His report was cited by Trump as a reason to withdraw from the Paris climate accord. It claimed that the agreement could shrink U.S. gross domestic product by $2.5 trillion within two decades (though Trump stated the impact as coming within a decade). The report was criticized by some as being misleading, because that amount is less than 1 percent of the aggregate GDP over that period and the report did not account for the cost of taking no climate change action. Dayaratna was invited to attend Trump’s withdrawal announcement in June in the White House Rose Garden.

Craig Idso, a senior fellow at the Heartland Institute: He has researched the benefits of atmospheric carbon dioxide. His work has centered on highlighting how increased carbon dioxide will benefit plants.

Paul Driessen, a senior policy adviser at the Committee for a Constructive Tomorrow, a libertarian environmental think tank: His organization handed out leaflets at a climate protest this year in Washington, D.C., that said, "CO2 is not the ‘control knob’ of the climate." He also co-founded Climate Exit, or "Clexit," which criticized the science behind the Paris climate agreement and holds that spiking levels of atmospheric carbon dioxide benefit the Earth. "The world must abandon this suicidal Global Warming crusade," the group stated in its founding statement. "Man does not and cannot control the climate."

Gordon Fulks, a physicist and adviser to the Cascade Policy Institute, an Oregon-based libertarian think tank: He has denied that net sea ice melt is occurring and that the Earth is warming. He has said those who express concern about climate change are like a "societal pathogen that virulently spreads misinformation in tiny packages like a virus."

Anthony Lupo, another founding member of Clexit: He has received support from the Heartland Institute and helped in the unsuccessful fight against the endangerment finding in court.

Leighton Steward, a former energy company executive and a founder of groups that promote the rise of carbon dioxide as a benefit: He has also encouraged the United States to drop out of the Paris climate accord and says that natural warming is raising the temperature of the Earth.

Republican lawmakers and other conservatives have long wanted to revamp the board.

House Republicans have repeatedly tried to increase industry’s role on the board, and this year they passed a perennial bill, the "Science Advisory Board Reform Act." Some conservative lawmakers have accused the board of being politically biased. Critics of the legislation say it’s designed to make it harder for academics to serve on the board.

In April, EPA dismissed about half of the 18 members of its Board of Scientific Counselors, just weeks after they had been told that they would be appointed to a second term — which is generally the practice. That board is largely tasked with technical and management reviews of EPA research programs. By contrast, the SAB has a more significant role: It was created by law and evaluates science that informs regulations, including those that affect the fossil fuel industry.

EPA did not respond to requests for comment for this story.

The Trump transition team at EPA recommended a complete reworking of all of its science advisory boards, and this is part of that process, Milloy said. He added that he expects the panel’s composition will change even more as additional spots open and Pruitt can stamp it with his influence. And while think tanks have typically been excluded from the SAB, Milloy said, he expects that will now change.

Milloy accused the panels of being rubber stamps and said they should be "reconstituted" because they lean toward environmentalism and liberal politics.

"They’re cronies of EPA, they fall in line, they do what EPA wants," he said. "It’s extraordinarily rare that they dare to question the EPA and, if they do, then the EPA just ignores them. If they’re not rubber stamps, then they’re useless."