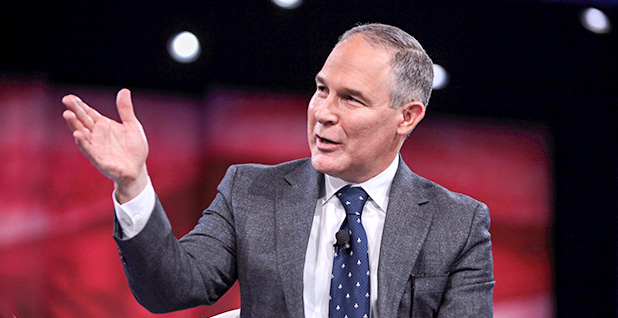 With widespread discontent among U.S. EPA staffers over the Trump administration’s policies and a push to downsize the agency through buyouts, some career employees are looking to jump ship.

Their former colleagues on the outside are ready to help.

EPA alumni are banding together to help their former colleagues find new jobs. They’re creating job boards, passing résumés around and spreading the word via social media. They say it’s an unprecedented networking effort among ex-staffers that comes as many EPA employees are feeling marginalized by the Trump administration’s environmental policies.

"We don’t want them to leave, but if they are going to leave, we want to help them out," said Chuck Elkins
, executive director of the EPA Alumni Association
, a group with about 1,500 members.

The alumni group on Saturday launched a jobs board "to provide employment opportunities suited for current and former EPA employees," according to the group’s website.

"This is just an effort to try to smooth things over for them in a very difficult time," Elkins said.

The alumni group decided to launch the site after hearing that EPA officials plan to offer buyouts to as many as 1,200 employees. Their last day would be in September.

Since the site launched last weekend, a few jobs have already been posted, Elkins said. FedEx Corp. posted a job for an environmental specialist. An EPA alumnus posted another opening at the California Air Resources Board
.

He said the alumni group wants to serve as "a network for the people who are leaving EPA."

The Twitter account @RogueEPAstaff,
which claims to be run by "staff, non-staff and some dude" — and has nearly 11,000 followers — posted the link to the jobs board early this week.

"Want to support EPA but not sure how? Hire a climate change hero! Post job opportunities here: https://jobs.epaalumni.org."

The Twitter account recently described staffers’ sentiments about the buyouts: "This is what we are all talking about on campus. 3 categories: 1) Fuck them, not leaving, 2) Scared for my job, 3) I’m leaving this shitshow."

Meanwhile, former agency employees who have landed in private-sector jobs or in the policy world say they’ve been getting phone calls and résumés from their former colleagues in EPA.

In addition to job networking, some ex-EPA staffers are getting involved with new organizations to advocate for EPA’s work on the outside.

The alumni association is a nonpartisan group that formed early in the Obama administration, making it the oldest and largest group of former EPA employees.

"Initially the idea was to help former employees network with one another," said Bob Wayland
, the association’s president.

"We have been evolving as things go on. We’ve been working hard to tell the story of EPA’s early successes."

The alumni association has been cautious about criticizing the actions of Administrator Scott Pruitt in order to maintain its commitments of being nonpartisan. Wayland said members had reached out to Pruitt for a meeting and had not gotten a response. He added that both former Administrator Gina McCarthy and Bob Perciasepe
, ex-Administrator Lisa Jackson’s deputy, had previously met with the association when they were in office.

Another new alumni group, the Environmental Protection Network
, emerged after Trump was elected. EPN is not an advocacy organization but instead is working to preserve a national system of environmental protection in a bipartisan way, George Wyeth,
one of the initial members of the group and former senior counsel at EPA, told E&E News earlier this year.

The foundation of the group’s work has been to use the institutional knowledge of its members to help explain the inner workings of a complex agency. So far, EPN has worked behind the scenes to connect reporters with experts who had worked at the agency. It also put together analyses of recent budget proposals for the agency (Climatewire, March 23).

Yet another new alumni organization — Save EPA
— is made up of mostly retired staff members from the agency’s Denver office. They organized in response to concerns about the Trump administration’s moves to shut down staff communication with journalists after the election, said Joni Teter
. She had worked at EPA as an enforcement attorney and now helps lead the group.

"We are going to have to come out of retirement and speak on behalf of environmental protections and understanding what EPA really does," Teter said.

While EPA staff members had frequently volunteered their expertise after leaving the agency, this is the first time it’s happening to this degree, according to leaders of the alumni groups. The organizing seems to be unique to EPA.

"There is no other agency that has been targeted for sheer dismantlement," said Teter.

Like EPN, Save EPA is still gaining its footing. The leaders are working on building up their social media chops and spreading the word about their work. Another chapter is also forming in Ann Arbor, Mich.

"We have been focusing on trying to find ways to help ordinary people understand what their protections are," Teter said.

Last week, the group released a document titled "A Practical Guide for Resisting the Trump De-Regulatory Agenda.
" It outlines the basic process of rulemaking and gives instructions on filing public comments and how to protest changes at the agency.

Ellen Kurlansky,
a 29-year EPA employee who retired last December, worked with Save EPA to produce the guide.

She had planned to fill her retirement with other activities — like local politics or environmental efforts — but "Trump happened, so I just didn’t feel like I could walk away."

Kurlansky said she’s "never seen anything like this" when it comes to alumni’s frenzy of activity during the Trump administration.