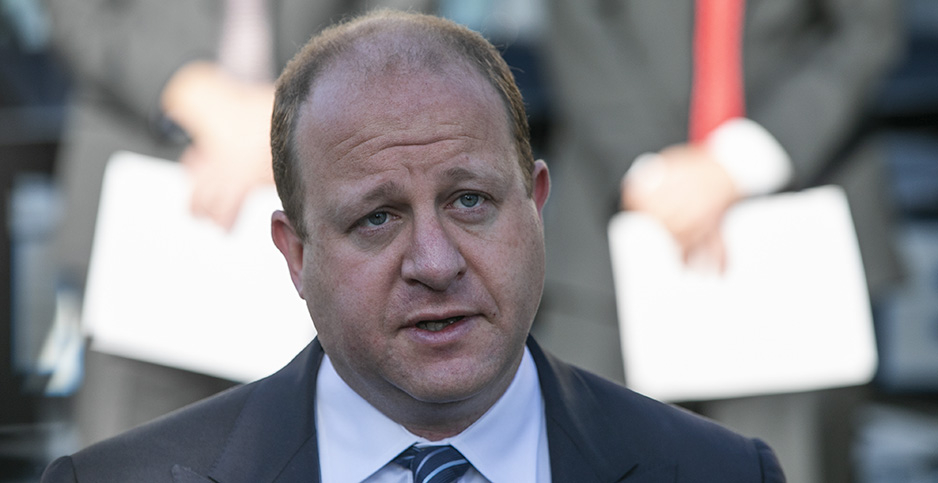 Colorado Gov. Jared Polis is at risk of losing the left.

The Democrat broke into open conflict with his green allies last week when he threatened to veto a major climate bill. His administration says it’s taking a faster, more flexible approach by bundling regulations and incentives with industry commitments to decarbonize voluntarily.

That argument doesn’t fly with the coalition behind the climate bill, with activists arguing that the state has already missed deadlines and lags its decarbonization goals. Polis’ relationship with progressives had already deteriorated since his 2018 election as a climate hawk, especially over oil extraction and environmental justice. His veto threat marked a new low in the relationship.

"It’s creating a lot of angst, I’ll say it like that," said Kim Miller, CEO of the outdoor company Scarpa North America and a member of Polis’ outdoor recreation advisory council.

Even more galling, some said, was the way Polis delivered his message. He contacted the editorial board of The Colorado Springs Gazette — a conservative paper in a conservative city — to blast the legislation as an "assault [on] our entire economy."

The bill would task Colorado’s air quality control commission with enforcing the state’s emissions plans, which Polis signed into law in 2019.

It would set a deadline of March 2022 to finalize sector-by-sector regulations to bring down emissions in line with the state’s 2025 and 2030 goals. It would create an environmental justice ombudsman. And it would enable the state to collect fees on greenhouse gas emissions.

Polis’ top energy official argues the emission fees and binding sectoral caps could lock the state into a cap-and-trade system that’s less efficient than the state’s current decarbonization approach, especially in diffuse sectors such as transportation and buildings.

But he downplayed the divisiveness that resulted from Polis’ veto threat.

It amounted to a "disagreement among friends," said Will Toor, executive director of the Colorado Energy Office, adding that the administration supports some of the bill’s components, like the environmental justice ombudsman.

The tone between Polis and the bill’s backers, though, sounds less than friendly.

"SB 200 is a top-down, hard-cap [emissions] bill that would essentially give this unelected board the authority to nearly destroy or assault our entire economy with a legal mandate to meet certain hard carbon reduction goals, many of which we’re already much of the way to achieving," Polis told the Gazette.

"We’re not willing to give dictatorial authority over our economy to one unelected board that lacks the broader mandate and expertise."

That pronouncement landed with a crash in Denver.

Polis’ opposition to the bill hadn’t been a secret. But a state legislative staffer said the governor’s combative veto threat blindsided Democratic lawmakers, who are still scrambling to suss out exactly what kind of compromise Polis might want. The bill advanced through a committee vote the same day Polis made his veto threat.

The confusion over what Polis wants extends to his larger strategy. Climate advocates say they’re at a loss to explain why a governor who can self-fund his campaigns and has already won statewide as a climate hawk now appears to be fighting his own climate goals.

"People feel a sense of urgency about this," Nordini said. "[Polis] ran on a platform of bold leadership on climate action, and we’re going to be looking for that. This was front and center in his election. … Where’s that going to go [now]? What’s that leadership going to look like in Colorado?"

And it’s not just lefties.

Consternation has been growing in the outdoor industry, which accounts for $37 billion of the state’s annual consumer spending, according to the Colorado Office of Economic Development and International Trade.

Nick Sargent, president of the outdoor association Snowsports Industries America, said the governor’s complaints about the bill seemed ever-changing and hard to pin down, like a "shell game."

Although the governor has generally had a good relationship with the outdoor industry, he said, the reality is that dwindling snowpack puts at risk 46,000 Colorado jobs.

"So when you start playing the shell game, we have to be the guy in the room to raise their hand [and say], ‘Hey, Jared, we know the score of the game,’" Sargent said.

"Do you want to support your oil and gas buddies for your next run?" he added. "Or do you want to work for the people? We’re just saying, you made a promise and we need you to come through on this."

Another problem facing Polis: Young people became Colorado’s single largest voting bloc in 2020, constituting 27% of the electorate, according to The Denver Post.

Climate is one of their top issues, and Polis’ potential veto threatens to demobilize them.

"It’s not saying climate change doesn’t exist. But climate scientists are also really clear that we need to be proactive and take strong, ambitious steps," he said. "By not taking action, it [seems like] a very similar mindset for young people."

‘We don’t have a choice’

Polis was already facing skepticism from several corners of the left. The Environmental Defense Fund and WildEarth Guardians sued him to compel faster climate action. Others have chafed at what they see as his accommodation of oil and gas companies.

"My community has seen him fail in a lot of places," said Ean Tafoya, a Colorado field advocate with GreenLatinos. He said Polis was sluggish to roll out renter protections or prison vaccinations during the pandemic, and oil extraction continues to disproportionately harm communities of color — a burden highlighted by the pandemic.

"The state’s erupting. I get calls from all across the state, I’m telling you," he said, pointing out that the state’s major newspapers have editorialized in favor of the climate bill and rallies are planned to support it.

That’s potentially created space to build a primary challenge to Polis in 2022, said Tafoya, who emphasized he was speaking personally and not for his organization.

"You almost, nationally, need to make an example," he said. "You can’t say you’re going to do the environment [policies] and then come up short. We don’t have a choice."

To be sure, Polis is pushing other climate measures through both the Legislature and the regulatory process. Earlier this week, he joined a sponsor of the climate bill he opposes as they unveiled other legislation to boost transportation electrification.

Progressives have pointed to the state’s climate road map to argue Colorado is only cutting emissions at half the rate needed to meet its goals. Without better enforcement, they say, those goals are just aspirations.

But that dataset doesn’t account for all the other climate bills and regulations that Polis is working on, said Toor, head of the state Energy Office.

Toor argued that the state’s regulations have already locked in reductions of about 58 million metric tons of carbon dioxide equivalent (accounting for an oil and gas rule that’s near completion). The state’s 2030 goal calls for about 70 million tons in reductions.

To get that remaining 12 million tons, Toor said, about half is projected to come from transportation. The transportation bill Polis unveiled this week would bring the state’s investment in transportation infrastructure to about $850 million.

That will pay for incentives that will power the state’s electric vehicle goals, Toor said, rather than relying on the air quality control commission to institute regulations on fuels.

"Can we guarantee [those reductions]? No, we cannot guarantee that," Toor said. "But do we have really powerful strategies that are a hell of a lot more than an aspiration? Well, yes we do."