The story behind the ethics memos on Pruitt’s condo lease 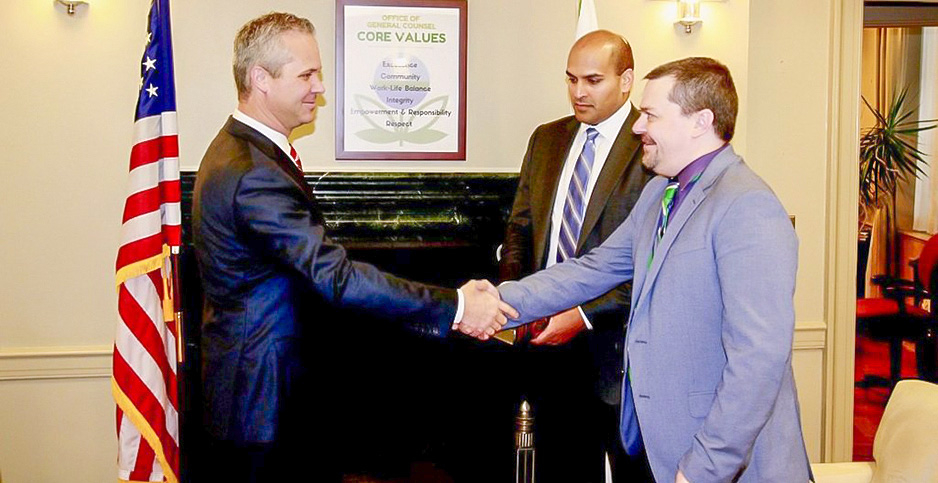 EPA’s senior counsel for ethics, Justina Fugh, sat down in a movie theater on a Thursday night nearly two weeks ago, and then her work phone buzzed.

It was General Counsel Matt Leopold, she found out after texting back. He wanted to talk about Administrator Scott Pruitt’s lease for a Capitol Hill condo linked to a lobbyist whose firm had disclosed lobbying EPA — news of which had broken earlier in the day and was quickly metastasizing into a scandal that endangered the EPA chief.

What followed was a haphazard ethics process at best, with EPA political appointees not initially sharing relevant information with their career counterparts, rental records being reviewed by reporters before ethics officials and Pruitt’s top aides at first consulting separate members of EPA’s ethics staff without informing the other, according to people familiar with recent events swirling around Pruitt’s condo lease at the agency.

Fugh had been made aware of the lease before her Thursday night phone call. She had discussed Pruitt’s lease earlier that afternoon of March 29 with EPA Chief of Staff Ryan Jackson, who mentioned it in passing, noting that Pruitt’s rent was $50 per night for one room and the landlord was a lobbyist friend. She indicated that since Pruitt paid rent, it might not be a gift under ethics rules.

Jackson had a different take on his conversation with Fugh. He told E&E News it was more than a passing reference to Pruitt’s lease and said he is in frequent contact with the senior ethics counsel.

"I work with Justina more often than she would probably like on a variety of personnel issues," Jackson said. "She is always the first person I call. In fact, because I have had to work with her so often on personnel, vetting, recusal and disclosure issues, I’ve recently assigned two more individuals specifically to help her do her job."

But later, on the phone that night with Leopold and now also Jackson in the theater’s lobby, Fugh was read portions of Pruitt’s lease, including that the administrator paid only for the nights he stayed in the condo. They also read dates and amounts from Pruitt’s canceled checks to her. Then they said she needed to be interviewed on the record by reporters right away.

What was unknown to Fugh was that Leopold had already that night spoken to her boss, Kevin Minoli, principal deputy general counsel at EPA and the agency’s designated ethics official. Minoli was in headquarters that night, having returned to work at the agency from a three-week-long overseas trip for his first full day in the office.

Leopold then left Minoli in his office and called Fugh on her cellphone. Leopold didn’t tell her that he had already spoken with Minoli.

Jackson said it was vital that reporters review Pruitt’s lease and canceled checks that Thursday night so they had the full information for stories that were going to be written that night. He also noted that Fugh helped provide context for that coverage.

"So important that Justina stepped out of a movie with her family to speak to a reporter, which provided a needed perspective for the coverage being issued that night. That perspective was later placed in the two memos."

Fugh wasn’t pleased with the episode. She shared a statement with reporters last week saying she was troubled by what happened.

"Ethics advice given by an ethics official is based on receiving all the facts. The federal ethics regulations provide that employees, in seeking ethics advice, make ‘full disclosure of all relevant circumstances,’" Fugh said.

"The advice I gave on Thursday at the movie theater was based on specific facts provided to me. I am troubled to learn that those facts were not accurate. I was too credulous at the time."

"We fully support and stand by our Agency ethics officials; EPA employees — both career and political — depend on their advice and we greatly appreciate their professionalism on this, and other matters," Bowman told E&E News.

She added, "It is not the Agency’s policy to discuss internal legal deliberations."

Fugh was called into a meeting Friday afternoon with Leopold, Jackson and Jahan Wilcox, a senior strategic communications adviser to Pruitt. Minoli would also join.

There, Fugh, for the first time, would review in person Pruitt’s condo lease and copies of his canceled checks, as did Minoli.

The three EPA political aides and two career employees began discussing Pruitt’s lease, including facts new that day to Fugh, like that Pruitt’s daughter had stayed with him in the condo while she clerked this past summer at the White House counsel’s office — Jackson remarked at one point that he had helped get the application of Pruitt’s daughter for the prized internship to be considered — but more information kept flooding in.

ABC News, which broke news of Pruitt’s lease for the lobbyist-linked condo on Thursday, followed up with a report Friday that in March 2017, the EPA chief’s personal security detail broke into the apartment building after Pruitt was not responding to them.

The incident had to then be explained to Fugh, who learned of it in the Friday meeting for the first time. Pruitt had fallen ill and gone home to take a nap, which is why he was not answering his security detail’s calls, she was told.

Minoli soon signed it, and it was released to reporters Friday evening. The retroactive approval came more than a year after Pruitt first entered the rental agreement.

Minoli acknowledged to E&E News that March 30 was tense at EPA headquarters but stressed that the memo was his own work.

"I would say while the day may have been an intense one, when the time came, I am confident that the memo I wrote was my own and it was not done under the direction or the pressure of anyone," Minoli said.

Jackson said he was unaware that Fugh was troubled by the process but was heartened that Minoli said he felt no pressure in drafting the first memo.

"In fact, both proffered a number of ideas evaluating the situation. Kevin offered to draft the original memo. The longer memo was demonstrating his analysis. Kevin also offered a statement explaining why we issued two," Jackson said.

Other records obtained by E&E News show Minoli was working on the evidence backing up EPA’s claim that Pruitt’s rent was "market value" on the day his first memo was released, as well as through the following weekend. Minoli performed searches of real estate websites on March 30, March 31 and April 1.

Retroactive written approvals have happened before at EPA under Pruitt’s tenure. Minoli signed a memo on Aug. 24 last year approving a request for Pruitt and his staff to take a charter jet from Denver to Durango, Colo., which had happened 20 days earlier on Aug. 4.

Minoli, however, had given his verbal approval to EPA officials on the day of the Colorado charter flight, which is allowed for urgent situations under federal guidelines.

‘It was important to be transparent’

Minoli’s memo on Pruitt’s lease was greeted with questions, and even ridicule in some quarters. Reporters also began to draw links between Pruitt and EPA’s actions that benefited Williams & Jensen PLLC clients that had business interests before the agency.

Steven Hart, chairman of Williams & Jensen, is the husband of Vicki Hart, who was Pruitt’s landlord when he stayed in the condo.

One New York Times report caught Minoli’s attention, showing that the agency had signed off on a pipeline plan by Enbridge, one of several energy clients of the lobbying firm run by Steven Hart.

By Monday night, Minoli had raised internal worries among top press aides at EPA about how the memo was being interpreted in the media.

"Today was the first day where I saw articles asking about specific actions the agency or the Administrator may have taken that have some alleged or real connection to the people [sic] were connected to the apartment," Minoli said in the April 2 email that linked to the Times‘ story, as described to E&E News by several people.

The EPA ethics official stressed to his colleagues that his memo applied only to the lease and couldn’t be used as cover for other actions by Pruitt or EPA.

"The memo from Friday in no way speaks to those actions, either by in [sic] endorsing them or calling them in the question [sic]," Minoli said. "The memo cannot be cited in response to questions raised about actions other than signing the lease and living in the space consistent with the lease."

Bowman, head of EPA’s public affairs office, offered a short response to Minoli the following Tuesday morning. "Hi Kevin, this statement was approved by Matt, based on what the administrator told us to communicate. Thanks — Liz."

Minoli would soon go public with his concerns. Late Wednesday night, his second memo emerged, making similar points to those in his internal email a few days earlier.

While Minoli offered an extended defense of his finding that Pruitt’s rent for the Capitol Hill condo was market value, reporters seized on language in the April 4 memo indicating that EPA ethics officials were missing "factual information" for their first memo and that it didn’t address questions on whether Pruitt remained impartial in government actions relating to those connected to him (Greenwire, April 5).

Minoli also released a statement, noting "the misunderstanding or mischaracterization of the March 30 memo."

Asked why he had put out a second memo, Minoli told E&E News that he wanted to offer more facts to show that Pruitt paid reasonable rent for the condo.

On Monday this week, the Office of Government Ethics released a sharply worded letter it had sent Friday to EPA, saying it expected the agency to conduct its own probe of ethics allegations against Pruitt. EPA’s ethics office has now referred the matter to the EPA inspector general for investigation.