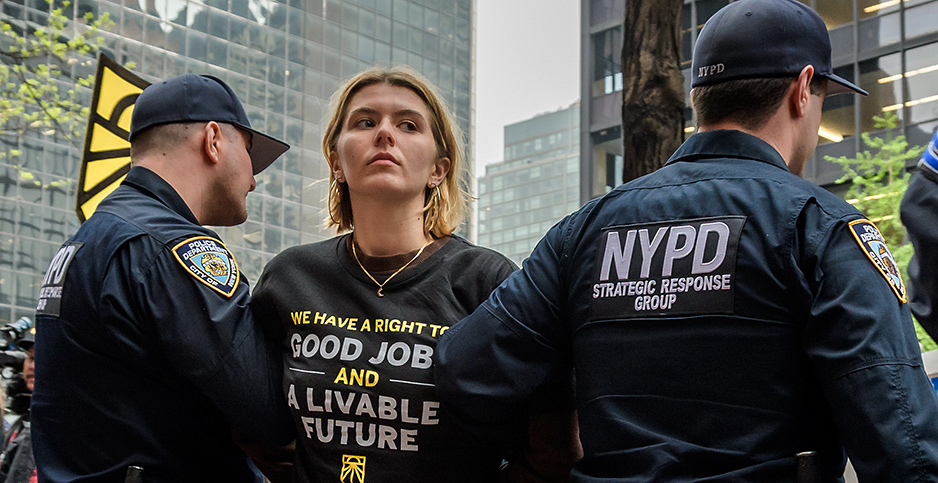 A Sunrise Movement activist getting arrested during a climate protest last year. The group's support of Sen. Bernie Sanders (I-Vt.) for president has failed to make him a front-runner for the Democratic nomination. Erik McGregor/Sipa USA/Newscom

A year ago, the Sunrise Movement loomed over the Democratic Party.

Its Green New Deal plan to fight climate change had earned the support of eight members of Congress with White House ambitions. Its in-your-face activism had pushed Democratic leaders to talk more about global warming than they had in years. And its promise of turning out the youth vote had prompted some party luminaries to dream of a 2020 revolution.

Then came the Democratic presidential primary.

With the support of its members, the youth-led Sunrise Movement rallied behind Sen. Bernie Sanders (I-Vt.) and his climate plan, and roasted former Vice President Joe Biden for his. Democrats would be "planning their own funeral if they nominate Joe," the group warned. Sunrise marshaled thousands of volunteers to phone bank and canvass, and — by the group’s count — its members had connected with tens of thousands of voters in support of Sanders.

And it pretty much lost.

With Biden on the cusp of clinching the Democratic nomination, young activists across the country now are grappling with a strange contrast. They successfully muscled climate into a top-tier election issue — only to watch Democratic voters back the candidate they opposed.

"My members already think electoral politics suck," said Johnathon Williams, a Sunrise organizer. "Mobilizing is only going to get harder."

But the enthusiasm problem may hold the seeds of a Sunrise comeback.

Some Democrats are growing alarmed at Biden’s lackluster performance among voters younger than 45. That weakness could give Sunrise and its allies leverage, according to nearly a dozen lawmakers, activists and experts. But only if establishment Democrats can be convinced that Sunrise activists are working in good faith, some of them added.

To unify the party and rebuild President Obama’s successful electoral coalition, Biden likely has to win over many of the young and progressive voters that Sunrise represents.

And to pull Biden to the left on climate — at a moment when candidates usually begin to pivot to the center for the general election — environmental activists have to persuade the campaign that he’ll need their votes to win and that he won’t get them unless he accommodates their climate demands.

That dynamic came into focus at a recent protest outside the Democratic National Committee, when DNC officials descended from headquarters to meet Sunrise activists on the street.

The DNC staffers advised the young activists on how to "flood" CNN with climate questions ahead of a recent presidential debate. They handed out their cellphone numbers. And with down-ballot Democrats relying on a strong youth vote, they urged Sunrise and other youth-oriented groups to keep up their turnout operations.

The activists had a counteroffer.

"This is not a crisis for our organizations. This is a crisis for the Democratic Party," Evan Weber, Sunrise’s political director, told the DNC staffers.

Primary exit polls show that Biden lost more than three-fourths of voters younger than 45, according to an aggregation by The Washington Post.

Biden’s team has quietly reached out to activist groups, but his allies bristle at assertions that he’s weak on climate. He’s incalculably better on the issue than President Trump, they say, and he’s gone further than Obama.

Biden also won a majority of voters who list their top issue as climate (Climatewire, March 4).

That could make it tricky for activists to demand more — meaning the next few months could see a split within the green movement between those who want to push the Biden campaign from the inside and those who see more potential in outside pressure.

"There is a fine line to walk in messaging and holding accountable party leadership," said Julian Brave NoiseCat, vice president of policy and strategy at the think tank Data for Progress.

Sunrise activists have shown Democratic officials there’s a price to pay for opposing the Green New Deal. Their sit-in at House Speaker Nancy Pelosi’s (D-Calif.) office catapulted the policy onto the national stage, and their recorded confrontations made less-famous lawmakers like California Sen. Dianne Feinstein (D) a target for "Saturday Night Live."

But the stick has to come with a carrot, NoiseCat said, and their harsh assessment of Biden’s climate plan — they scored it an F-minus — ignores the ways his campaign has tried to accommodate activists’ demands.

"At some point, I would say Sunrise might have torched some of their own political capital," he said. "And I do think there could be some risk — actually, in fact I know there is some risk — that the Biden camp might feel that, what is the point if they lean into climate and they still get graded as an F-minus? What is the point of accepting the provocation?"

The group has also ruffled feathers by endorsing progressive challengers to moderate Democratic incumbents and protesting Democrats rather than the Republicans who have long either ignored or denied climate science.

"They’re not the only ones in the progressive community that sometimes lose sight of who their friends are," said Rep. Jared Huffman (D-Calif.), a member of the Select Committee on the Climate Crisis. "This is a uniquely progressive phenomenon where you sort of revert to very insular, intermeshing warfare, while the people that are your real enemies continue doing all the bad stuff."

Militancy might cause some of Sunrise’s problems, observers said, but it also builds its strength.

So far this cycle, Sunrise says its activists have made 212,000 calls, knocked on over 24,000 doors and collected 20,000 pledges to vote for candidates who back the Green New Deal.

Much of that was in support of Sanders, but it also played in down-ballot races challenging moderate Democrats.

In Texas, Sunrise drew Pelosi into campaigning for oil industry ally Rep. Henry Cuellar (D), who held on by about 4 percentage points. And in Illinois, it joined with a coalition of progressive groups to knock off Rep. Dan Lipinski (D). The group supported his challenger, Marie Newman, by knocking on almost 3,300 doors, more than her margin of victory.

Few green groups have risked their Democratic relations by intervening in primaries, regardless of the candidates or the office.

Sunrise differs from those organizations in that it’s staking a moral position rather than one derived from political calculations, said Brett Hartl, chief political strategist at the Center for Biological Diversity Action Fund.

"Their role is to be the voice for the people who will suffer the most for the poor decisions of our current leaders," he said. "They don’t care about that insider access and playing nice and trying to work everything from behind the scenes. They’re not set up for it, I don’t think they have an interest in it."

The cost might be less access or fewer good relationships, but that’s not an unusual position for the environmental movement.

"I have zero expectation that the Biden administration cares what we think on policy," Hartl said.

Weber, a co-founder of the Sunrise Movement, said the organization’s confrontational strategy has gotten it more lawmaker meetings than other green groups. Even its endorsement of Sanders, he said, was about picking the easiest target for the group rather than picking a savior.

At the end of the day, Rep. Ro Khanna (D-Calif.) said, Sunrise’s role is not unquestioningly to support Biden if he is the nominee this fall or to be reasonable, as so many moderates would like. It’s to put issues on the map and drive the Democratic Party in a new direction.

"You can’t censor activism. Everyone has a different role to play," said Khanna, a co-chair of the Sanders presidential campaign. "As an elected official, I’m going to do everything possible to support the nominee, but I’m not going to tell activists how they should act."

A detente between Biden and activists might not come until the exit of Sanders and when Biden begins turning toward general election strategy.

Biden could shore up his climate credibility by borrowing from the plans outlined by Massachusetts Sen. Elizabeth Warren (D) and Washington Gov. Jay Inslee (D), said Maggie Thomas, who was a climate adviser to both those campaigns.

Sunrise gave good marks to Warren’s plan but passed her over to endorse Sanders. Nevertheless, Thomas said the group would play an important role in the election.

"Organizations like that are just going to be super-important and critical to ensure there’s strong enthusiasm from the youth vote," she said.

Comparing Biden’s climate plans to Obama’s — or even Hillary Clinton’s in 2016 — shows how much more aggressive Democrats have become on the issue, said Paul Bledsoe, a former Clinton White House climate aide who is now a strategic adviser at the Progressive Policy Institute.

Biden gives a nod to the Green New Deal in his $1.4 trillion climate proposal. But the crux of his proposal is market-driven rather than federally mandated. He favors a carbon tax, and he plans to finance emissions-cutting efforts with $5 trillion from states and the private sector. Biden also calls for net-zero emissions by 2050 but hasn’t set an intermediate benchmark.

Sanders’ climate plan is what most activists mean when they describe a Green New Deal. Rather than a carbon tax, it centers on a $16 trillion plan for the federal government to reshape the energy, transportation and manufacturing sectors. It calls for electricity and transportation to have net-zero emissions by 2030 and economywide decarbonization by no later than 2050.

If Sunrise has trouble pushing Biden further, Bledsoe said, it’s because it’s already made him change so much. The group has also made it easier for Biden to use climate in the general election. A climate emphasis, he said, would unify the party while offering a sharp wedge issue to use against Trump.

But such unity isn’t here yet.

Weber said Biden’s message of "restoring the soul of the nation" doesn’t resonate with Sunrise members. And when confronted on the campaign trail, Biden at times has toggled between dismissing criticisms of his climate record and telling activists to vote for someone else.

Weber said the group won’t be able to mobilize young people unless the Democratic Party — and Biden in particular — promotes a climate policy that matches the scale of the problem.

The alternative is to ask Sunrise members to support the business-as-usual approach the group was formed to oppose, said Williams, the Sunrise organizer.

That carries its own risk, Williams said, as it would align his own credibility with "the sinking ship of the DNC’s reputation."