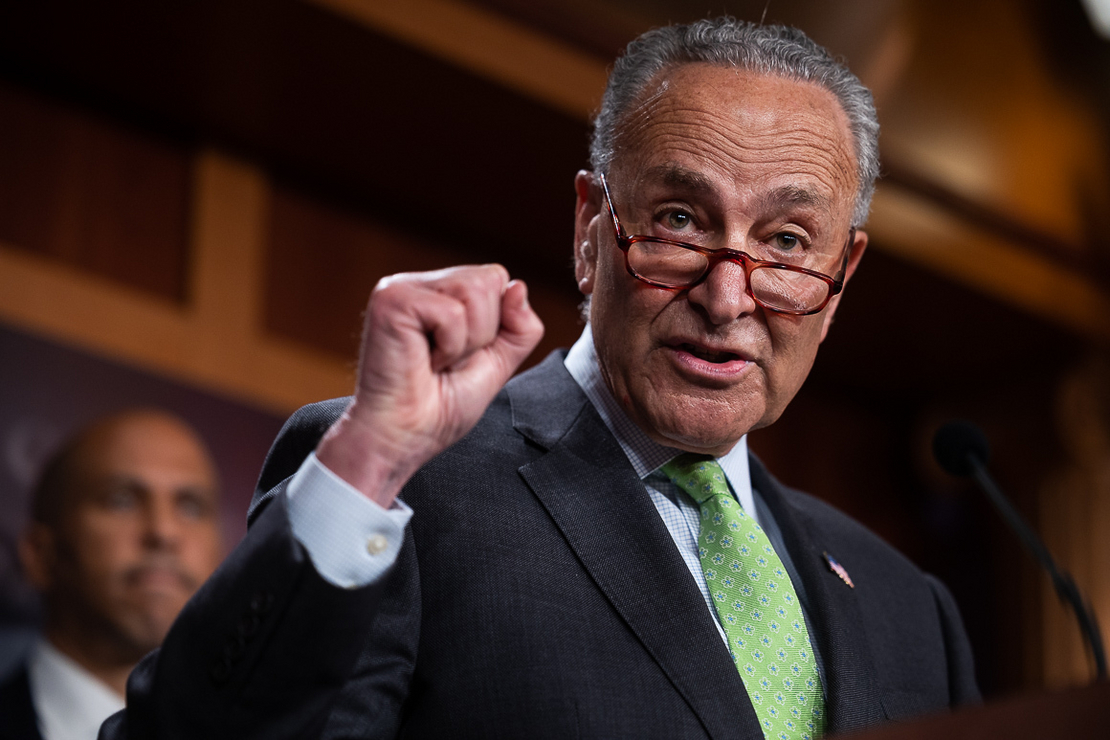 The New York Democrat announced that he will take the first procedural step Monday to start votes on the yet-to-be-seen bipartisan infrastructure package agreed to by 22 senators in the White House. He will file cloture on the motion-to-proceed to a vehicle for the roughly $600 billion package, setting up the first vote for Wednesday.

“Everyone has been having productive conversations, and it’s important to keep the two-track process moving,” he announced on the Senate floor. “All parties involved in the bipartisan infrastructure bill talks must now finalize their agreement so that the Senate can begin considering that legislation next week.”

Schumer also announced a Wednesday deadline for the entire 50-member Democratic caucus to agree to move forward on the $3.5 trillion budget resolution agreed to by Budget Committee members and leadership this week.

Passing the budget resolution is the first step in unlocking the budget reconciliation process that will allow much of Biden’s infrastructure agenda to bypass a GOP filibuster in the Senate and pass by a simple majority. Democrats this week said the deal will include a clean electricity standard that aims to reduce emissions by 50% and hit 80% clean energy by 2030 (E&E Daily, July 15).

“The time has come to make progress, and we will,” he said. “We must.”

While Schumer had previously said that he plans to vote on the bipartisan package and the budget resolution before the August recess, the deadlines add impetus to the parallel negotiations unfolding on Capitol Hill.

Some Republicans who are part of the bipartisan talks were miffed by the deadline, which they said they learned of from Schumer’s floor remarks.

Sen. Mitt Romney (R-Utah), who is part of the group, said he would not support the procedural vote to advance a bill that remains under construction. “I would think it would be a dereliction of duty to vote for a bill that hasn’t been drafted yet,” he told reporters.

Another GOP negotiator— Louisiana’s Bill Cassidy — said the bipartisan group is working to meet the deadline but questioned the feasibility of doing so. He noted that the negotiations depend on technical assistance from outside agencies, including the Congressional Budget Office, which must assess the deficit impacts of legislation before it hits the floor.

“There is an iterative process with the agencies that you just can’t say, ‘OK deadline,’ and you know that the agencies have completed everything,” he told reporters. “We’re working toward a deadline, I suppose, but I can’t promise you it’s going to be completed.”

Senate Minority Whip John Thune (R-S.D.), who is not part of the talks, questioned the wisdom of an “artificial deadline.” “I imagine he’s trying to get the process moving forward, but it could be really nonproductive on his end if he actually wants a result,” Thune said in the Capitol yesterday.

However, Schumer later said that Democrats involved in the talks have said they’re making “very good progress.” “There is no reason why we can’t start voting next Wednesday, and that’s what we’re going to do,” he told reporters.

Several Democrat involved in the talks said yesterday that having a bill ready by Wednesday is achievable, and downplayed the deadline pressure.

“There are a few remaining issues,” Sen. Chris Coons (D-Del.) told reporters. “Our staffs worked very hard over the recess. We had a very positive and constructive, long meeting Tuesday night. A group of senators just finished a follow-on meeting about some of the key pieces. I am optimistic that we can hit this goal next week, but we’re just going to have to keep working at the same frequency and intensity.”

Coons added that work will continue over the weekend. “It will be a busy week,” he said.

Two key Democratic committee chairs said yesterday they were optimistic on their panels’ contributions to the bipartisan package.

Energy and Natural Resources Chair Joe Manchin (D-W.Va.) said in an interview yesterday that “it looks good” for the $95 billion energy package his committee approved Wednesday to be included in the framework (E&E Daily, July 15). He said legislative text of the energy provisions would be finalized by today.

Environment and Public Works Chair Tom Carper (D-Del.) said committee staff continue to work on incorporating the surface reauthorization legislation that passed the panel in June, S. 1953, into the bipartisan bill. It will also include the Senate-passed $35 billion water infrastructure bill, S. 914, which will be “fully funded” when it gets to the floor, Carper added.

“There’s money that’s going to be added on to what was in our bills, and we are heavily involved in in parsing that in directing that money, which is good,” he told E&E News.

Pay-fors were one topic between top White House officials who huddled with the 10 Republican negotiators yesterday. “We’re working on the pay-fors,” Sen. Rob Portman (R-Ohio) told reporters after the meeting. “And we’ll end up with a good package.”

But he also suggested that Schumer’s deadline could slip. “I don’t know if we’ll meet anybody’s arbitrary timeline,” Portman said. “That’s not the point. The point is to get it right. We’re moving as fast as we possibly can.”